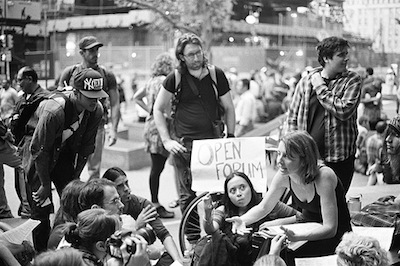 [Editor’s Note: Our new guest blogger Evan Neely (bio below) joins the ongoing series of Dispatches from an Occupation with this post. Thanks to our first guest blogger, Hannah Chadeayne Appel, whose posts on Occupy Wall Street you can read here. You can also follow Social Text collective member Nicholas Mirzoeff’s blog Occupy 2012 here.]

One of the members of my working group, The People’s Think Tank, recommended me as a good person to speak to young activists last week at the Civil Rights Student Summit in New York organized by Teaching Matters. The folder they gave to the set of people they brought in to speak to the students, most of whom were in eighth grade, said “community activist” on the front. Reading that brought me back to a discussion facilitated by the Think Tank on May Day, where we got to talking about what it meant for us to be activists. When it was my turn to speak, the only words on offer were something like “I really don’t like to think of myself as an activist. I kind of want to think of myself as a normal person. I don’t think that most of what I believe is all that radical, and I don’t know why other people think of it that way.” Surprisingly, this met with more consensus than would have seemed likely. So when it came to be OWS’s turn to speak at the student summit, after the conventional introductions, my offer was “Don’t call yourself an activist.” Feeling the need to clarify (most of the other activists seemed slightly confused), what followed was “If you call yourself an activist, it says to people ‘there’s a certain kind of person called “the activist,” and you can choose to be one… or choose not to be one.’ It kind of gives them an opportunity to let themselves off the hook — they can say ‘well, yeah, I think that’s awful, but I’m really not an activist,’ just like they might say, ‘well I’d love to hang out with you, but I’m not a soccer player, so let’s do something else.’ Really, anyone who sees an injustice should, simply by being able to say ‘that’s unjust,’ feel compelled to do something about it, no matter who they think they are as a person.” Surprisingly, this met with a lot of approval, most especially from the organizer of the summit.

What everyone seemed to like was the implicit claims my words made about subjectivation, even if people don’t generally use such a postmodern word. Richard Sennett argued almost four decades ago in his The Fall of Public Manthat our period in history was marked by the translation of all significant issues into predicates of oneself — it wasn’t so much a question of the real situation you were involved in, it was whether that situation was something the kind of person you were was going to care about, and what it would say about you that you cared. All of the weight of any moral or political situation fell on who you were before you came to it. There are styles of thinking that have always thought this way, but Sennett does seem to me correct in asserting that we as a culture are especially prone to think this way. To me, it’s unfortunate that Occupy, which in so many other ways is a new model of sociability and therefore a new set of potentials for subjectivation, still holds to the idea that we’re all “individuals,” and that we come to interactions preformed. In other Think Tank discussions, I’ve tried to say that we shouldn’t do this, and that we should recognize that who we are as persons is something we can only reflect on in specific situations, and that new situations make us new persons. It doesn’t always take.

One of my friends (comrades, really) often says “we are not a protest movement.” My attempts to make something of this have always been groping. On the one hand, we do tend to think of ourselves as doing something fundamentally novel, and the language we speak, being derived largely from contemporary anarchism, labels what we do “direct actions” rather than “protests,” which would be how someone a bit more mainstream might describe them. Changing language is often a way to change the situation one is acting in, but our movement in particular, which has always prided itself on its transparency (even as we are — often deliberately — misunderstood by the people with whom we interact), may want to consider that we are, in fact, acting in front of people who have their own languages. If we want to speak to them, we can’t play the games they prescribe to us (we can’t become subjected to their models of behavior if we are saying those behaviors are unhealthy or immoral), but we can’t assume that our actions are going to be transparently intelligible to them, either. Turning us into “activist” subjects is a way to marginalize our ideas, so as to block our actions from having real consequences. And if we’re not demanding or protesting, but rather simply changing the game altogether, this is going to demand of us that we recognize the full weight of what we’re doing. We have to act so that they can’t call us activists. To do that, we have to make a new community, and forge a new language. For a while, it may sound like we’re protesting.

Evan Neely lives three mostly separate lives. He is a postdoctoral fellow at Columbia University and a Visiting Assistant Professor at Pratt Institute, where he teaches classes in political theory and art history. His work focuses on the relations between expressive interaction, communications technology, and the organization of labor in the 19th and 20th century United States. He also has a career as an illustrator, under a pseudonym, and Occupies Wall Street in the intervening hours.