Skip to content
By   IIAAF May 21, 2021 Categories UncategorizedTags Palestine 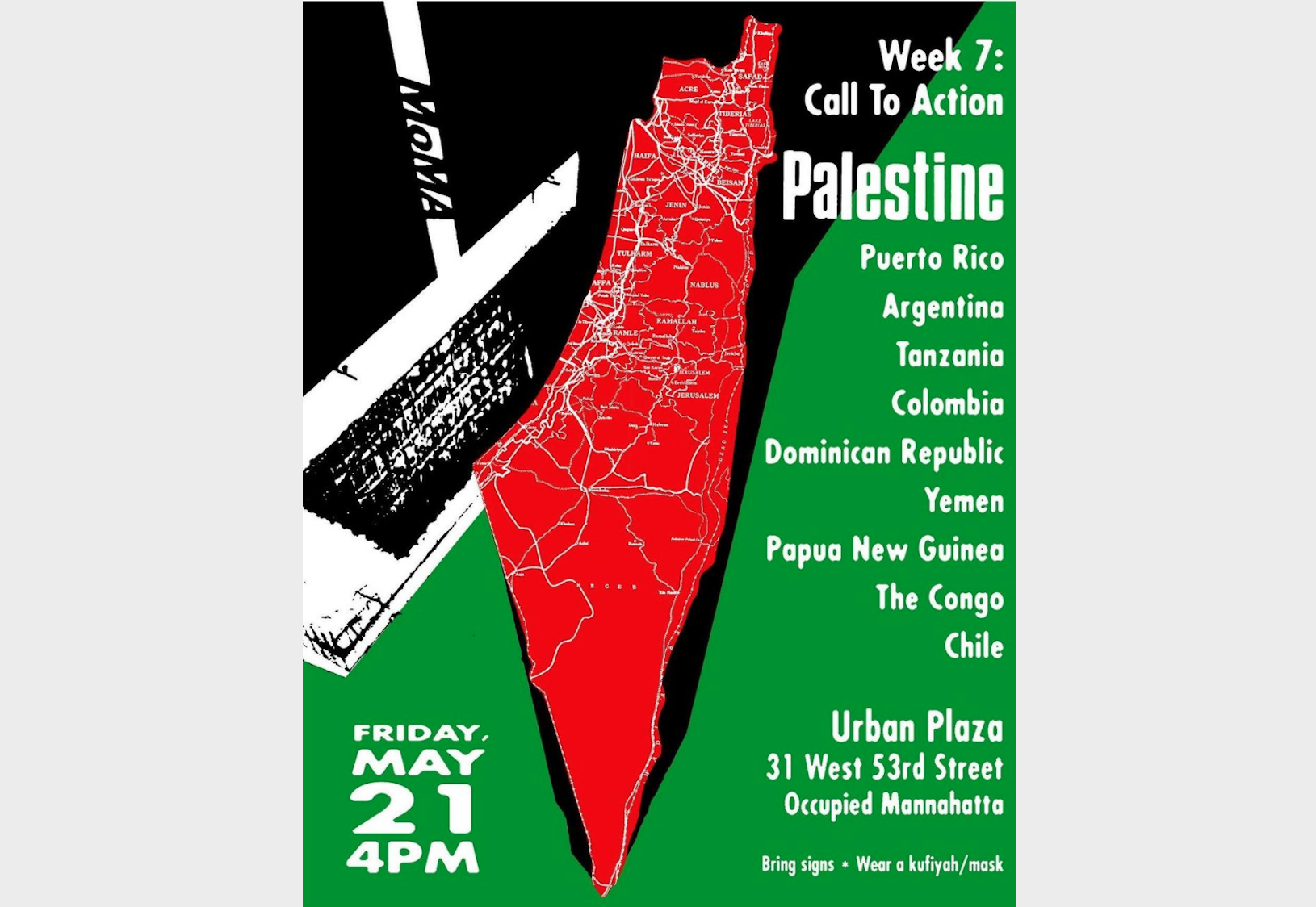 We the undersigned artists, critics, scholars, and organizers are writing to express our support for the Palestinian struggle against Israeli colonial rule and its apartheid system. We feel it is urgent to highlight the connections between the ongoing violence of Israel against the Palestinian people and a leading institution of the art system, namely the Museum of Modern Art (MoMA). This letter aims to build decolonial solidarity across borders by drawing attention to MoMA’s entanglement with the mutually reinforcing projects of settler-colonialism, imperialism, and racial capitalism in Palestine, the U.S. and around the world. When we focus on the interlocking directorate of the MoMA board, the museum becomes visible as a shared site of action for our interconnected struggles. This works against the all-too-frequent isolation and exceptionalization of Palestine, and strengthens the bonds between Free Palestine, Indigenous sovereignty, Black Freedom Movements and all other movements for land, life, and liberation, from Puerto Rico to Kashmir and beyond.

Violence against Palestinians has intensified in recent weeks, first with the ongoing forcible displacement of families in Sheikh Jarrah, then with the violent incursion into the Al-Aqsa Mosque, followed by the carpet-bombing of Gaza, and a series of organized settler attacks across occupied Palestine. This has included attacks on spaces for media, culture, and art, most recently Dar Yusuf Nasri Jacir for Art and Research in Bethlehem. At the same time, these attacks have united Palestinians both on the ground and in the diaspora, with resistance proliferating in a diversity of forms: yesterday, a General Strike shut down the entirety of historic Palestine, and massive marches have taken place in cities throughout the world, with #PalestineStrike as a shared declaration of agency, dignity, and solidarity.

Cultural institutions are part and parcel of struggles against settler-colonial violence. 600+ cultural workers have announced a boycott of Zabludowicz Art Trust in London on account of that organization’s ties to the Israeli military. The Boycott Divestment Sanctions (BDS) movement is gaining momentum, including the affiliated Palestinian Campaign for the Academic and Cultural Boycott of Israel. As part of the Palestine mobilizations in New York last week, hundreds gathered at MoMA, where a young man was arrested and beaten by the NYPD. The police had been called to the scene by the museum, which on the same day announced that it would be permanently banning five organizers from stepping foot in the museum.

Why show up at MoMA? Why now? Because many members of the MoMA board are directly involved with support for Israel’s apartheid rule, artwashing not only the occupation of Palestine but also broader processes of disposession and war around the world. Consider Steven Tananbaum, CEO of GoldenTree, a hedge fund known for profiteering from the Puerto Rico debt crisis. Tananbaum’s foundation donated 1.8 million dollars to “support Israel by sending young adults to Israel” via the Art Institute of Chicago, dwarfing his $400,000 contribution to MoMA itself that year. Daniel Och, CEO of Och-Ziff Capital, also known for its plunder of Puerto Rico, is a current member and former chairman of the Birthright Foundation, which is also partly funded by the Israeli state. Birthright tours aim to recruit Jewish youth from around the world, especially American Jews, to the Zionist cause while sanitizing the occupation and erasing Palestinians. Leon Black, best known for his connections with Jeffery Epstein, has donated more than 1 million to Birthright as well. Paula Crown’s wealth comes from her husband, James Crown’s armaments company General Dynamics, whose Land Systems division works closely with Israeli military technology companies, and the Israeli Occupation Forces themselves (General Dynamics products have also been used in the bombing of Yemen by the Saudi government). The MK-84 bombs being dropped on Gaza by the Israeli air force are made by General Dynamics. The Paula and James Crown Creativity Lab on the second floor of the museum stands while homes, schools, hospitals, and media offices in Gaza are flattened.

Finally, MoMA’s Honorary Chair Ronald Lauder is president of the World Jewish Congress, which has long campaigned in defense of Zionist policies, and, most recently, has lobbied numerous heads of state including those of Britain and Germany to adopt the International Holocaust Remembrance Association’s definition of anti-Semitism. This definition is widely used to conflate criticism of Israel with Anti-Semitism, and has resulted in the proscription and criminalization of speech in support of Palestinian liberation (including but not limited to BDS) as a nefarious form of racism–a development that should concern everyone in the arts. This definition of Anti-Semitism also serves to collapse a plurality of Jewish identities into one identity indissociable from the state of Israel, tacitly condoning the violence it perpetrates in their name. This is a form of psychological warfare that defines Jewish people who speak out against the occupation as “traitors,” “self-hating Jews,” or even unworthy of having their voices considered Jewish at all. With this in mind, it is also worth mentioning the fact that Lauder is a close friend and donor to Donald Trump, and is closely connected with the pro-Israel evangelical Right. This reliance on Trumpism and the Christian Right for Zionist support has ironically fuelled the growth of real movements for white supremacy and anti-Semitism in the U.S.

With figures like Lauder, Crown, and Tananbaum on its board, MoMA cannot pretend to stand apart from the attack on Gaza or the Occupation of the West Bank and Jerusalem more broadly. Because the corporate power and wealth that sits atop the museum suffuses all of its operations, there are no clean hands. Given these entanglements, we must understand the museum for what it is: not only a multi-purpose economic asset for billionaires, but also an expanded ideological battlefield through which those who fund apartheid and profit from war polish their reputations and normalize their violence. For MoMA’s board members, the trail of their malfeasance leads in many directions, from fueling climate crisis to support for the NYPD Foundation to the extractivist violence of the Cisneros empire. But there is no denying that Palestine is one of the crime scenes of the MoMA board. We do not expect, nor do we call for, any statement of concern from MoMA. Let us remember that a year ago after the murders of Breonna Taylor, George Floyd, Ahmaud Aubery that museums issued statements of solidarity with Black Lives Matter, only to board up their windows as the rebellion unfolded.

For those who love Palestine, we have waited too long for this moment to not say what needs to be said despite the fear, the risk, the cost, of speaking out and naming things for what they are. We stand with Palestine, or we stand with silence, aiding and abetting the disaster. We unequivocally denounce the continuation of the Israeli settler colonial project, its apartheid regime, and the interlocking technologies of power and violence that enable it. We unequivocally support the right of return for all Palestinian refugees. We call upon our friends, colleagues, and communities to join the struggle for a free Palestine.

This Friday, May 21 at 4 PM Est. people will gather at MoMA. We call on the museum to respect people’s right to protest, and to refrain from involving the NYPD, which creates an unsafe environment for everyone involved. For those who are not in New York City or who otherwise cannot participate in person, an online assembly will also be held. We encourage and support autonomous parallel actions, wherever they may take place. To join the online assembly or to share information about parallel actions, write to freepalestine_strikemoma@protonmail.com.

We Will Not Be Silent

Within Our Lifetime: United for Palestine