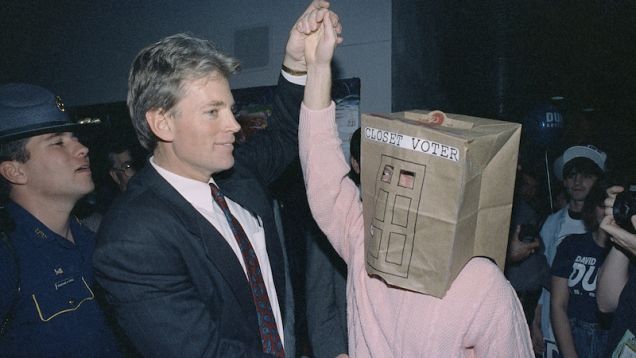 I write not with the expertise of a political scientist or demographer, those emperors of data and partisan, capital ‘P’ politics whose new clothes—AKA ‘big data’-informed poll predictions—have only just been revealed to some (not others) as ruse. I write today as an ethnic studies professor, born in Iran and raised an undocumented immigrant in a deeply segregated South. I write as a professor of little ‘p’ politics, at that scale of life where policy caresses and penetrates the skin, producing cancer and lead poisoning, where one face looks at another face and exchanges words through language (sometimes epithets), where glyphosate-stricken food is eaten and maquiladora-made guitars are strummed, where hundreds of feet momentarily dance away the dystopian times at silent discos in desperate acts of escapism. These spaces constitute my laboratory.

At this scale I have watched the soldiers of Trump advancing my entire life, soldiers trained in my segregated public schools where the Civil War was actively mourned by the sons and daughters of the Confederacy. In my South of the 1980s, the new threats to white supremacy were refugees remaindered from the US wars in Southeast Asia and franchise colonialisms in the Middle East, resettled in Nashville and left to decipher the complex racial history of that place. That racial history informed my then-unfolding racial present where I nightly looked on with horror at the unbelievable televisual spectacle of the Iran hostage crisis with mouth agape and stomach in knots as I anticipated children aping the racial epithets against Iranians they heard at home the following morning in my classrooms. These were classrooms that practiced an at-will form of segregation reinforced by a curriculum that perpetuated the idea of white supremacy the soldiers were learning to defend. Through this we learned that they were obviously at the top of the food chain while the rest of us scrambled around trying to figure out our places.

Barred from the status of citizen enjoyed by white students, we new immigrants quickly learned from our Black classmates about the ways of their world. From them we learned to dance, play Double Dutch, and love half-time step shows. We also learned other quotidian forms of knowledge, like the fact that the Klan hood protects the Janus-face of a racist who still has to go about his daily business, engaging in commerce and working side-by-side with the likes of the rest of us. We learned that anyone (teachers, police, ministers, the manager of the apartment complex) was a potential Klansman and that feigning respect with “yes, ma’am” and “yes, sir” might disarm the backlash that was always palpably present, threatening to be unleashed.

Today we wake up to the unleashing of that backlash, learning the hard lesson that the Klan hood can be replaced by the ballot box: that bastion of anonymity that emboldens the racist to more freely tap into a feeling of injury and a sense of restitution for that injury against the likes of the rest of us. But the fascinating thing for me, as a professor of ethnic studies in what we are told is Obama’s “post-racial America,” is that the ballot-box-as-Klan-hood is where no one believes in a post-racial America. Just as the hood masks the identity of the Klansman, the ballot box and voting booth mask the identity of white supremacists too ashamed to publicly admit their racism to pollsters. Thus, the exit polls belied the fact that white supremacy bleeds across state lines like the reddening of the US map on election night as we grimly descended into Wednesday morning.

The story of white injury mourned by the sons and daughters of the Confederacy is not exceptional to the South. It is an echo of the story told by Northerners about their brave Protestant forefathers who founded this country while seeking freedom from religious oppression. It is the same story of heroism told by the descendants of pioneers who tell death-defying tales of forefathers who risked life and limb to settle the Wild West. The amazing flexibility of this origin story for white supremacy invites other aspirationally-white immigrants to claim this as their story too. This origin myth belies the reality on which the US was actually founded: hostility and animus toward Indigenous inhabitants of the lands Protestants sought ownership over and an economy structured around Africans forced onto these lands and into the status of chattel.

The sleight of hand it requires to perpetuate the status of honorable victim permanently held by white settlers is the exact same sleight of hand that has just taken place in the ballot box. The soldiers of the televisual spectacle that is Donald Trump©™ are emboldened not only by what Freud called the phylogenetic memory, or intergenerational trauma, of a Union victory/Protestant search for religious freedom/pioneer’s trailblazing, for which the injured continuously seeks restitution, but by imagining new threats to white supremacy in the form of Muslims and the undocumented.

By allowing white (and white-aspiring) voters to once again claim the status of the oppressed, Trump has reclaimed as their sole property concepts that the Civil Rights Movement took decades to make common sense and cause. The sense of threat to white supremacy felt by Trump’s soldiers is so intense that Trump’s actual profile, which could not be more different than the profile of those who voted for him, does not matter. Trump is the capitalist serpent that is chewing on the tail of capitalist democracy—the democratic part to be specific. This is precisely one of his greatest assets: unlike Hillary Clinton, he does not espouse to a pretense of capitalist democracy, just capitalism and white supremacy like the forefathers of my white classmates in the South.

As we have painfully been reminded over and over again—through deportations, drone strikes, endless wars, police brutality, and breaches of Native sovereignty—an Obama presidency was not the panacea to end racism so many projected it to be. In the wake of the unthinkable, can we dream what may have been undreamable under Obama, a vernacular justice of the little ‘p’ variety in which the injury that we all presently endure is the trump card that might suture us together into a motley, freakish patchwork? The angst felt by so many right now, the shock, the horror, the sense that everything fair, just, and moral has evaporated—this is the quotidian, the everyday for the rest of us, and has been from the nation’s founding. If the rest of them could learn from the rest of us—to dance, to play, to resist—then perhaps we can exit the Trump presidency better off than when we entered it.

Roshanak Kheshti teaches ethnic studies and critical gender studies at the University of California, San Diego. She is the author of Modernity’s Ear: Listening to Race and Gender in World Music.