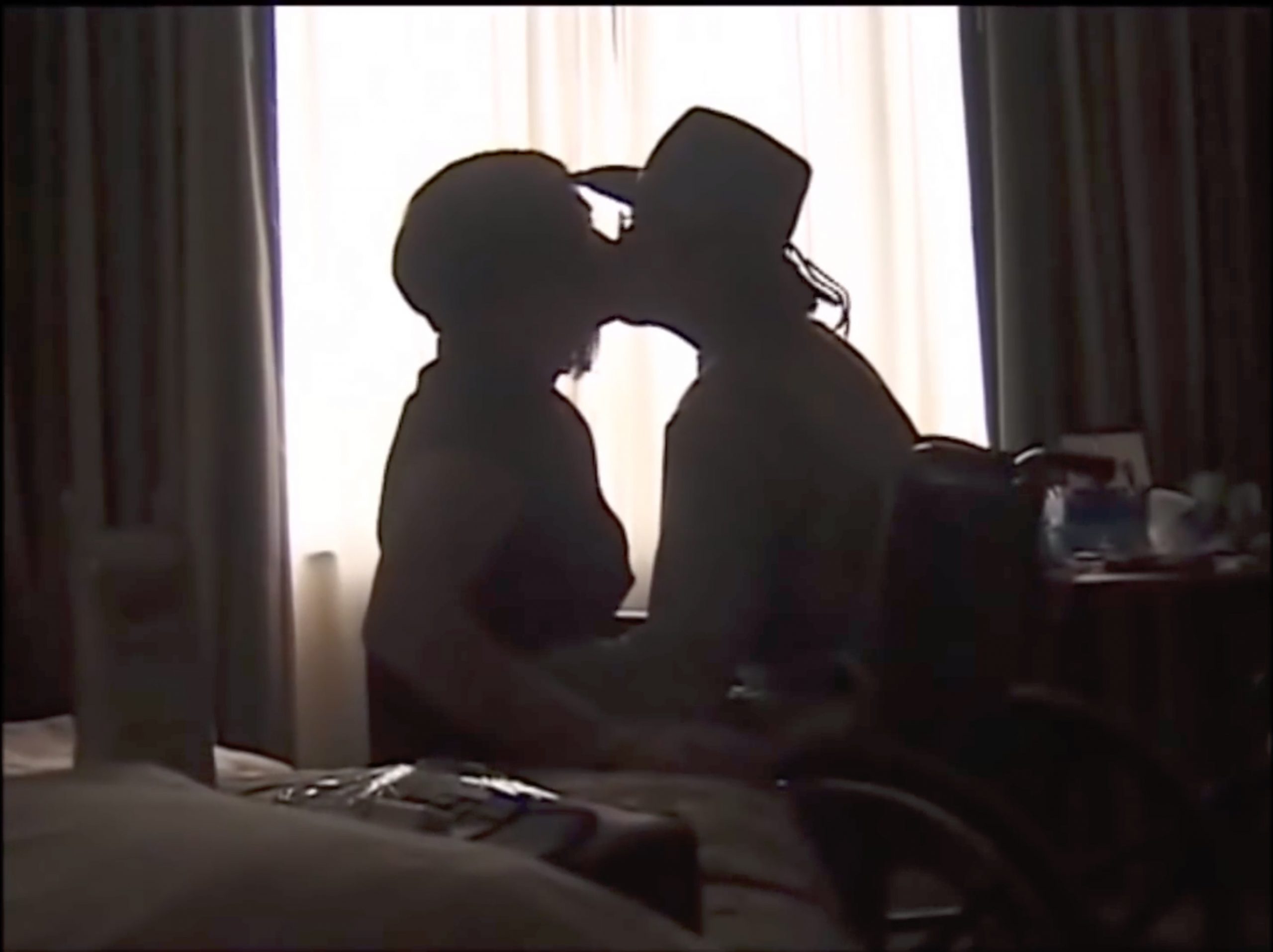 My shoulders stiffen the first time I watch Southern Comfort (2001), the film Kate Davis made documenting the last year of Robert Eads’s life. I am aware of the eyes and bodies in attendance, late 2018. I notice my companions flinch as Robert’s friend Cas removes his shirt and feel protective of Cas and Robert, their friends and family in Toccoa, Georgia: ninety miles northeast of Atlanta, where I have never been. Cas presents an area around his nipple where a surgeon left a hole. It has since healed, imperfectly. He faces the camera, recalling: “You could see the muscle.” The camera zooms in.

On trans surgery forums I’ve scrolled through a thousand chests: selfies flexing or standing squarely in the mirror. I think about how much lighting matters, the quality of the camera, the underwear the guy wears, in setting a more or less triumphant stage. Each chest is time-stamped, each set of scars the signature of a surgical hand. This is what I got, this is what they gave me, this is what I had to pay. Late 90s-early 2000s top surgeries are selfies stored within a dim suburban basement in my millennial imagination: dingy paneling, linoleum, the dampness of my internalized phobia. There were fewer surgeons then. From most places within the US, you had to travel further to find resources, making trans health and community events like the annual Southern Comfort Conference, for which Davis’s film is titled, even more important. That is what we must hear in the speech Robert gives at his last conference: “I have terminal cancer, I should have been gone months ago… I said God let me make it to another Southern Comfort.”

Cas sits on a hotel bed at Southern Comfort, dress shirt unbuttoned. My first viewing of Southern Comfort falls a couple weeks before my top surgery date. For all the chests I’ve scrolled through online, I cannot think of another post-op trans-guy chest I’ve seen at the movies, outside of an explicitly queer context. In an earlier scene, Robert’s chest disappears as he lowers himself into a hot tub. He leans his head back, taking in the steam. What does it mean that I feel protective of Robert Eads in 2020, twenty years after his death? When I say I feel protective of him, I mean I want to protect him from my own projections, and I feel protective of myself.

I feel protective about language. Robert identifies himself in the film as heterosexual. The panel he co-facilitates at Southern Comfort with his girlfriend Lola Cola is titled “Trans-to-Trans Intimacy.” Cas calls his wife Stephanie a genetic woman. This may have been a vocabulary lesson for filmgoers in 2001, when Southern Comfort won the Grand Jury Prize for documentary at the Sundance Film Festival. On camera, Robert theorizes: “Being a man or being a woman has nothing to do with your genitalia. It has to do with what’s in your heart and what’s in your mind.” I can only imagine how this might have sounded in Toccoa, 2001. I fear the audience might not know the difference. I will never know the difference, not completely. Does our not knowing signify erasure? My protectiveness is wrapped up in an admission: I am no authority, especially when it comes to time.

In 2001, Southern Comfort was lauded for humanizing trans experience, deploying what Jack Halberstam has termed the “transgender look.” In an essay titled “The Transgender Look,” Halberstam commends Davis: “By showing Robert to be part of a transgender community rather than a freakish individual, the film refuses the medical gaze that classifies Robert as abnormal and the heteronormative gaze that renders Robert invisible.” Halberstam, however, does not account for Davis’s gaze. The scene in which Cas takes off his shirt for Davis’s camera stands out as one in which an aspirational “transgender look” unravels, in which it becomes hard to ignore the power that imbues the act of looking. I find myself in 2020 longing for more of these moments, through which to learn something critical—about historical representations of transsexuality in cinema and about intimacy, power, and documentary work.

Southern Comfort is structured by the four seasons of 1998-99, moving among the homes and cars of Robert and his close circle, ending in the nursing home in which he died at fifty-four, later in 1999. By the spring of 1998, when Davis began filming, twenty doctors in Georgia had already refused Robert treatment for the cancer that, while he was seeking care, spread from his ovaries through his cervix and uterus, metastasizing through other parts of his body. We watch Robert take pills; he first uses a cane and then a wheelchair. We’re spared on-screen interactions with medical professionals and other bigots; details about the medical insurance that, at least at the time of his diagnosis, he does not have. We learn little about his finances, though we know he owns the property where his trailer sits. Lola has an office job, for which she pretends to be a man. Robert and his friends refer to doctors who said it would threaten their professional practices to see a transsexual. “Kind of a cruel joke,” he says. “The last, only part of me that was female was killing me.” He speaks in the past tense, as if it has already killed him.

As we watch Robert lose weight, we watch him fall in love with Lola. The sweetness of their later-in-life romance is amplified by the occasion of the Southern Comfort prom, for which Robert buys her a corsage. Davis films Robert’s conversation with the florist at the mall, who seems delighted. Robert, a charming cowboy, smiles back from his chair. “For the prom she never had.” In an interview, Davis describes how, after six trips down to Georgia, Southern Comfort became a film about relationships. “In the editing room,” she says, “I approached the whole thing as just a love story, with the gender issues all a subtext.”

My protectiveness of Robert, I tell myself after my first viewing, is not directed at the phobic doctors who refused him treatment, but at the filmmaker. Kate Davis met Robert Eads in 1997 at True Spirit, an FTM Conference in Maryland. Davis was there on assignment, co-directing “Transgender Revolution” for the TV network A&E. It is significant to point out that Kate Davis, like Robert, is white. She is a cis woman married to a cis man, educated, credentialed, and based in New York City. It is also relevant that Davis has worked on several documentaries about gay and trans people, assistant-editing Paris Is Burning (1991) and co-directing the PBS-produced Stonewall Uprising (2010). Both of these films stand as widely-circulated documentaries that, among others, have contributed to the overwhelming misrepresentation and erasure of women, trans people, and especially Black and trans women of color, within histories of struggle and resistance. Many writers, including bell hooks, have discussed the complicity of such documentaries within industry norms. While reproducing logics of white supremacist hetero-patriarchy, such films purport to do the work of humanizing by making their protagonists’ lives relatable–presumably, to a whiter, more resourced filmgoing class. I am invested in critiquing Southern Comfort because of its success in this task. Because if not for Kate Davis, I might not know about Robert. When I watch the film a second and third time, it’s more than a year after my first viewing. I’m alone and its tenderness destroys me.

What roles can intimacy play in documentary filmmaking? Robert identifies himself as understanding intimacy. He explains this is something that distinguishes him from Maxwell, his trans son / sometimes brother: while Maxwell knows sex, Robert knows intimacy. Both men are in “Trans-to-Trans” relationships with women. Both make shady comments about the other’s girlfriend, neither thinking anyone’s good enough for their friend. They agree that their friendship is intimate.

In her IndieWire interview, Davis discusses her intimacy with Robert, and the intimate economy of her film’s production. She explains that, because of all the “hardship” that “transgendered people” experience, “they’re often much more open, and immediately intimate, than many people.” She elaborates on her and Robert’s relationship:

We were on the same team. Robert knew the film had to be made. He felt it was really important that his story got out there, and that people learn these kinds of social and systemic atrocities happen… It wasn’t just that I came in as an outsider, to capture images and run off with them.

By the time Davis met Robert in 1997, there wasn’t time to fundraise for the film’s production. He was already dying. His friends risked being outed in service of the story. These are profound conditions of the film’s making.

Davis rose to the occasion of Robert’s circumstances, shooting Southern Comfort without a production budget. She often filmed alone, sometimes accompanied by a sound recordist. I want to question Davis’s statement about not coming in as an outsider and running away with captured images; not to discredit the rest of Davis’s statement, that she and Robert had a mutual understanding–but to complicate it. The intimacy between Kate Davis and Robert Eads is complicated, which might also be what makes it real. Shaped by proximity to death, their intimacy is also shaped by power dynamics that are not addressed within the film, and from which Davis might be read as abdicating herself, when she talks about their mutual drive to get the story out–as if that drive were something either of them could be separate from.

How could it work to practice a documentary ethic that acknowledges power as part of intimacy? Davis’s claim that trans people are more “immediately intimate” than others seems absurd and fetishistic, symptomatic of an incomplete or failed recognition: of what it might mean, for someone being killed by violent, discriminatory health-care policies and practitioners, to live in a movie. As Lata Mani has argued that dignity is not something that can be conferred or stripped away, intimacy does simply appear before the camera, or emerge by entering someone’s home or car or relationship–even if they’re t4t. Sometimes intimacy emerges as it retreats, invited and challenged by the camera. The most affecting moments in Southern Comfort are those in which Davis’s camera is acknowledged as wielding a power of possibility: to be remembered and mis-remembered at the same time.

Asa Mendelsohn is an artist, writer, and teacher who has recently begun embracing a lifelong phobia of cameras. He is working on a nonfiction film that moves between quiet places in Southern California, where in the mid-2000s a grassroots movement resisted private military development, and New York City, where the filmmaker is coming from.