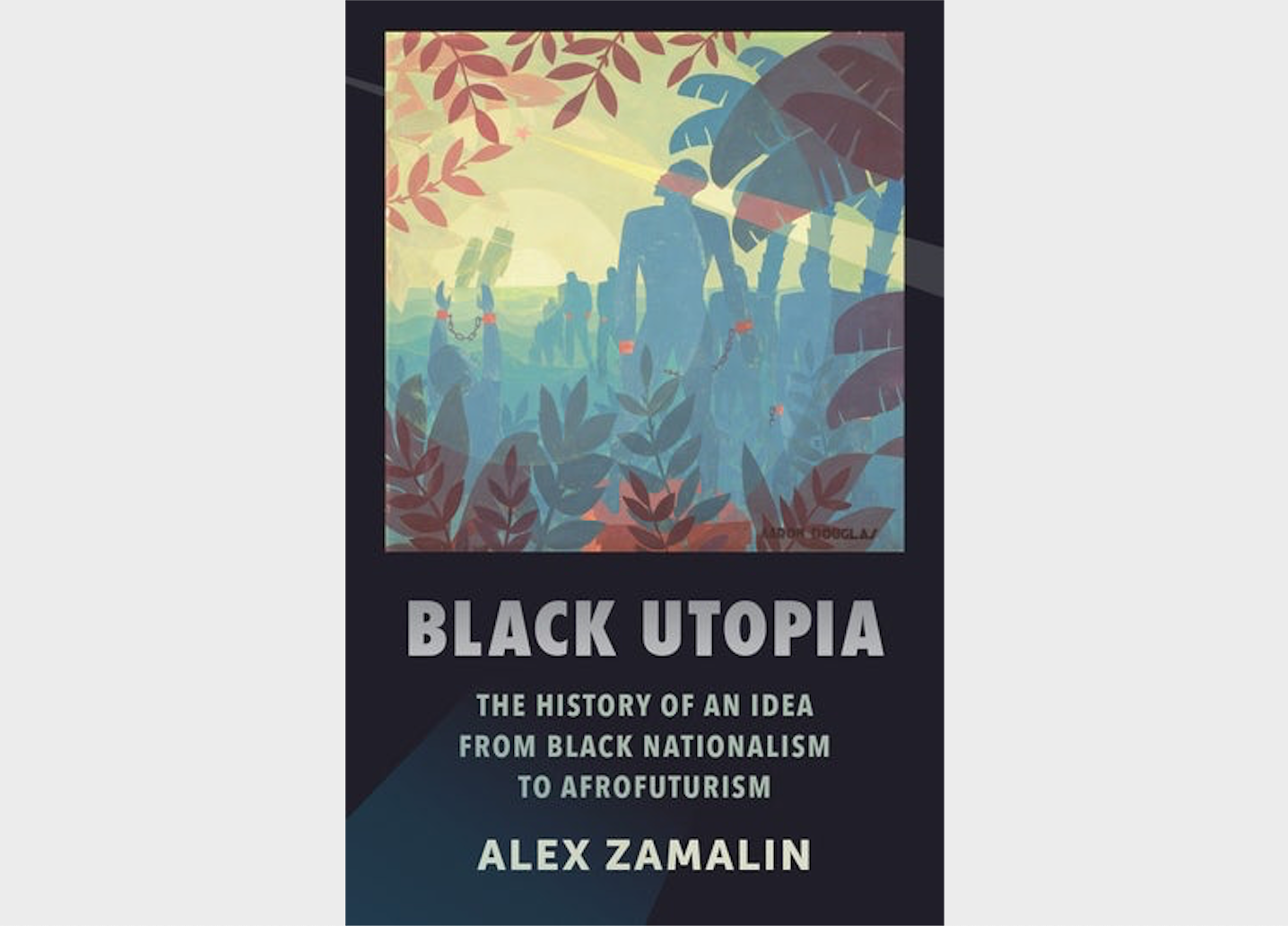 The year is 1974, the place is Central Park. The jazz musician and iconoclast Sun Ra appears in the park’s band shell “with a hundred musicians, including six drummers, ten bass players, ten trumpets, ten trombones, and three French horns.” The concert is dedicated to “Nature and Nature’s God” and intended to commemorate his new Ihnfinity corporation. Ra, in reality, had wanted a thousand on stage with him that day. After the concert, he is reported as saying that ten thousand would have been better, “to realign the earth and ‘melt all atomic bombs’” (Szwed 242). The number, ever increasing, finally peaked at 144,000 musicians (Zamalin 108). This, we learn in Alex Zamalin’s intellectual and cultural history, Black Utopia: The History of an Idea from Black Nationalism to Afrofuturism (Columbia University Press, 2019), is the scale of the Black utopian imagination.

Utopia, as a mode of thought and speculation, is not necessarily or inherently an emancipatory endeavor. One person or group’s utopia might just as well be founded on another’s relegation to servitude or oppression. This has been evident at least since Plato’s Republic or Politeia, whose idealized political formation instrumentalized women’s bodies, was constitutively anti-democratic, elitist, and reproduced itself through what can only be described as a kind of proto-eugenics. The history of utopia, however, is an ambivalent one: it has included both totalitarian fantasies of perfection and elite rule, as well as emancipatory dreams of otherwise possibilities, to borrow a phrase from Ashon Crawley. It is with this latter tradition—one which itself contains ambivalences and oppressions of its own—that Zamalin’s book is concerned.

“Black American reflections on the idea of utopia,” Zamalin writes, “contain some of the most powerful political ideas in the American tradition” (1). He understands this tradition of reflection, which he refers to as “[u]topia in black” (12), as including not simply utopian imaginaries of ideal societies and forms of social and political organization, but equally, antiutopian satires and critiques of utopia, as well as literary uses of dystopia that nonetheless advance visions of how society might be built differently, albeit in inverse. For Zamalin, literary Black utopianism isn’t easily subsumed under a Western utopian tradition, because whereas the latter is often characterized by “romantic tropes, [a] sense of wholeness, spiritual redemption, and rational teleology,” Black utopianism, by contrast, “became much more critical and infused by a sense of tragedy,” as well as “unfinished conversations, unresolved debates, critical problematics, which resisted easy resolution” and “a sense of committed struggle in the face of the unknown…coupled with a realistic sense of subversion and collapse” (12).

Whereas Black utopias proliferate across film, television, comics, and other media today, Zamalin’s book is a study of the specifically literary history of Black utopianism. Before Black Panther’s Wakanda there was Telassar, “a hidden black civilization in Africa” (36), Pauline Hopkins’s African utopia in Of One Blood (1903), which Zamalin locates in a long line of Black utopias that, in his narrative of the genre, cover the historical expanse between two utopians named Delany: from the nineteenth-century Black emigrationist and author of Blake; or the Huts of America (1859), Martin Delany, to the science fiction writer, Samuel Delany, in the present.

All but one of the book’s chapters are dedicated to a single author representative of their moment, and each writer is located vis-à-vis their relation to utopianism/antiutopianism. Zamalin moves chronologically from Martin Delany (Chapter 1), through turn-of-the century utopians such as Sutton Griggs, Frances Harper, Pauline Hopkins, and Edward Johnson (Chapter 2), to mid-century giants of African American letters such as W. E. B. Du Bois (Chapter 3), George Schuyler (Chapter 4), and Richard Wright (Chapter 5), arriving at the one musician included in the book, Sun Ra (Chapter 6), and concluding with the two titans of contemporary Afrofuturism, Samuel Delany (Chapter 7) and Octavia Butler (Chapter 8). No history of such an expansive cultural field can be exhaustive, and Black Utopia is not encyclopedic.

A fascinating aspect to Zamalin’s book is its demonstration of how the speculative fictions of some Black utopians subverted their overt, sometimes elitist or conservative, political positions. This is the case for figures as diverse as Martin Delany, Du Bois, Schuyler, and Butler. Schuyler, for example, is a contradictory figure, whose political allegiances move from socialism in the 1930s to conservatism, “anticommunist McCarthyism,” and membership in the John Birch Society in the postwar period. However, Schuyler’s novels Black No More (1931) and Black Empire (serialized 1936-8), in contrast to his later autobiography, Black and Conservative (1966), reveal a different set of convictions. They were “satires in the vein of Jonathan Swift, Alexander Pope, and Voltaire,” and “examined…the dominant ideas circulating within American society—the progressive dream of postracialism, of black assimilation into white culture, of an unproblematic racial passing, and Pan-Africanism” (65). Whereas Black No More “critiqued American patriotism” and “its colorblind rhetoric” (70), Black Empire was an “antiwar text” and “revealed how one of liberalism’s founding wishes to minimize suffering led to maximal suffering” (75, 77). Likewise with Du Bois: his speculative novel Dark Princess (1928) deeply complicated his defense of a Black “enlightened vanguard” embodied in his belief in a “Talented Tenth”—on the one hand, by “enact[ing] the very civic republican critique of elite rule levelled against Du Bois and the NAACP,” and on the other, by “outlin[ing] an opposing justification for popular governance” (59).

It is a defamiliarizing experience to read a political scientist like Zamalin write about literary texts. The texts under his consideration might be identical to those taken up by a literary scholar, even one writing in the politically attuned, cultural studies vein of most literary criticism today, but the result is both stylistically and conceptually distinct from what one might expect. Zamalin’s preoccupations are often those central to Anglo-American political theory: “arbitrary power” (24), “deliberation about the public good” (38), “natural rights (53, 77), “the problem of pluralism” (92), “democratic conversation” (141), “democratic engagement” (92), “social contract theory” (13), and so on—which, if anything, only enriches his readings. Aside from the inarguably diminutive field of “the sociology of literature,” pace Terry Eagleton’s aspirations to have it be otherwise and strained efforts to synthesize the history of economic thought with literary studies under the banner of “New Economic Criticism,” it is generally rare to encounter such a lengthy, sustained engagement of literary texts by a social scientist. Perhaps precisely for its unusual disciplinary perspective and its non-participation in various heated contemporary debates (Afropessimism versus Black Marxism, definitional struggles around speculative fiction, and perennial discussions about literary periodization, genre, and form),  Black Utopia serves surprisingly well as a comprehensive (but not exhaustive) overview of the literary history of Afrofuturism.

In the decades following the end of the Cold War and the Fall of the Berlin Wall, Zamalin tells us, “utopian imaginings have largely been abandoned” (137). And not without good reason:

On some level, this concern has a sound intellectual basis. It is difficult to disentangle the dream of communist equality from Stalinist Russia’s repressiveness, industrial advancement from the Nazi mechanized slaughter of Jews, unlimited nuclear energy from nuclear war, an end to disease from eugenics. (137)

But not all utopias—and utopians for that matter—are created the same. Black American utopianism is distinct precisely for its privileging of a critique of oppression over the specification of the contours of a utopian society. Utopia in Black is concerned “less with giving vivid texture to an ideal society” and “more with a normative defense of [Black utopians’] position and a critique of unjust structures it oppose[s]” (16). Afrofuturism was not born yesterday, even if the term itself is only a little under three decades old. Doing justice to the history of Black utopia involves cultivating an understanding and appreciation for the generations of Black utopians who came before, even as we celebrate the dazzling works of those still in our midst.

Smaran Dayal is a PhD candidate in comparative literature at New York University, working on a dissertation on Afrofuturist and postcolonial speculative fiction. He is the co-translator of The Queer Intersectional in Contemporary Germany (2018) and co-organizes the NYU Postcolonial, Race, and Diaspora Studies Colloquium.