Skip to content
By   Chris Campanioni May 18, 2022 Categories Poetry 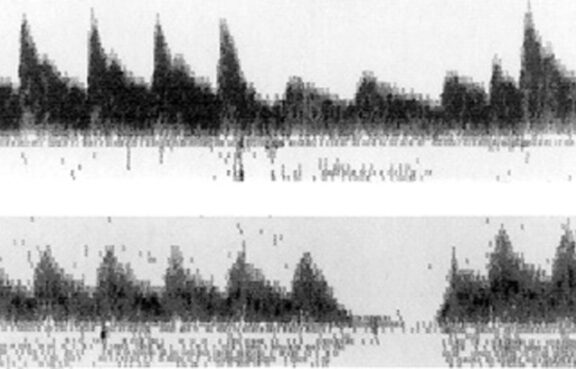 returned as a body

To measure the circulation within my brain G places a transducer to my face, to the flesh above my ear. I like the part before—G’s gloved hand applying a cool gel to my neck, my scalp, my eyelids—the best. Later, the instrument sends out a message to my brain, which my brain will or will not send back. When the energy reflects, the monitor to my left graphs the unit into colors, each hue (I guess) designating a different intensity. Sound turns into pictures, pictures turn into speed, when speed can be made material, returned as a body. Even if I couldn’t look, as I’m looking now, I can hear it—the sound of waves breaking, or the beating of wings—collaborative incantation of the outside-inside, when the moment of coincidence turns into song. Waves on the shore, the flight of angels, or birds. Unless it’s the swift ejection of a bomb, the long, slow descent. I want to keep it inside so I say nothing, except to ask about the name, to know the name of the instrument that makes art out of unseen breaths.

I remember the first time I saw a VHS, how enamored I was with the black brick, not for what it was but for what it wasn’t. What it offered or seemed to offer (even then, as a child—but I couldn’t have understood any of this as a child … and perhaps that’s the point, or one of them: to love without understanding) was an escape from the familiar and singular, where I could press play, and catch bits of other stories, other people’s lives, other universes merging with the one I was born into, the one I belonged to (if I belonged anywhere), without having to do anything but look, to keep looking, a kind of looking I was more accustomed to do with my eyes shut: to overlay fantasy and imagination on the A/V signal. I liked the slips and interruptions, chance falters in the footage that seemed rhythmic, bodily. My life and the lives of those I knew intimately and the lives of people I would never know—people playing other people, people playing music on a stage, people fucking on command, bodies in a ring, arms locked, swollen flesh against swollen flesh … the camera pans to the crowd of other faces, swollen, too, in their own way, and beyond identification—were taped and then taped over, re-recorded until the cassette became a scrapbook of moving images, ritual occasions threaded by marionette bodies (melted, blown out, and then lit again), the fuzzy realism of a handheld gaze as it wanders to the periphery of the frame—implying the promise, but only the promise, of physical contact: not the effect of the camera so much as the hand that holds it up. The joy was not to watch but in watching, to surrender to the thrill of an experience that is a combination and a combination that changes with each viewing. Discrepancy between when the mouth moves and what the mouth breathes out, like a voice grafted, or an image inserted over my heaving expiration (a curiosity for texture; the collaboration of limbs) when the world moves in more than one time signature, when the desire for coincidence betrays any assumption of unity. And as I rewind, as I slide the object into this machine, as it is received, gladly, with a quick, cool suck (a sonic memory I can also feel), I listen for the guts to churn, I listen for the reprocessing of so many originals, so many copies. Can’t a book, too, be a VHS? Can I make a book of scraps to replace the text proper (the proper text)? A, whom I trust implicitly, wants me to write more “conventional essays”—I don’t like scare quotes but I want to make sure I am getting this right; getting this wrong. The writer, who can’t be trusted, wants to write more cassettes, where each page becomes a strip of magnetic tape that readers can control. What I am doing, or trying to do, or think I am doing is working as a collection agent, as someone who collects, except the debt I am after is my own. It takes patience, to assemble the scraps, to wait for the moment when A and B become indistinguishable, reversible, when an original is degraded, when it becomes worth something less and something more. I sometimes have the nerve to think I’ve waited my whole life for this.

Chris Campanioni's latest book is A and B and Also Nothing (Otis Books | Seismicity Editions, 2020), a re-writing of Henry James’s The American and Gertrude Stein’s "Americans" that merges theory, fiction, and autobiography. You can find him on Twitter @chriscampanioni.