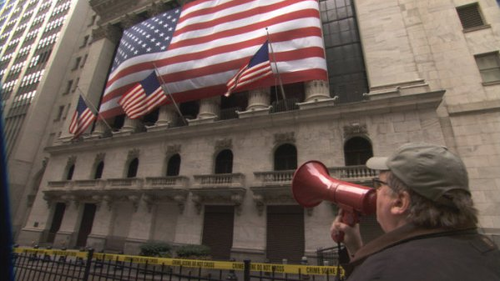 A Review of “Capitalism: A Love Story,” directed by Michael Moore

Crimes have been committed in this building. I am here to make a citizen’s arrest.

In the final scene of “Capitalism: A Love Story,” Michael Moore drags police tape around city blocks that house the corporate offices of Goldman Sachs, AIG, Merrill Lynch, Citibank, Wachovia, and J.P. Morgan Chase — all recipients of taxpayer money used by the federal government as part of a “bailout” package. Moore’s stated purpose is to make a “citizen’s arrest” of the criminals who, when faced with the ramifications of their own financial faux-pas, “backed an armored car up to the US treasury” only to leave with 700 billion dollars of “our money.” Moore figures each corporate building as the scene of a crime, leaving us to ponder the implications of what William Pietz once called the “forensics of capital,” where “forensics” does not simply refer to police procedures and physical specimens, nor exclusively to legal judgments (like the fine or prison sentence dealt to a convicted criminal) but to a broader range of strategies for translating “physical causality into [the] social causation that establishes legal liability,”1 a set of techniques for charting the relationship between the social act that leads to injury, death, or wrongful termination and the forms of redress that ensue.

Moore’s criminal inquiry explores the link between value and vitality across a series of related domains as a way to signal the duplicity that has eroded cherished features of US citizenship — home ownership, personal security, the right to a fair wage, and the opportunity to store savings for one’s family in the case of death or injury. Moore indicts the US government with criminal negligence for relinquishing control of these pressing social issues to corporations who profit from popular demise. An early segment features an appearance by Peter Zalewski of Condo Vultures whose company, he confesses, helps clients with “no compassion, no sensitivity” — people who “are looking to slit any single seller’s throat”–buy foreclosed homes they can later re-sell at a profit. “A vulture basically represents a bottom feeder that goes in there and cleans off a carcass,” says Zalewski. “The vultures aren’t actually killing, they are the ones doing the clean up,” he elaborates, but acknowledges that “because they are dealing with so many germs and so many situations” vultures “will often vomit on themselves.” “Chk-chk.  Boom!” Zalewski cocks an imaginary shotgun to figure the fatal blow to the deceased he mines for sustenance, as he stares directly into the camera suggesting that the “difference” between his work and that of a “real vulture” is “simple”: “I don’t vomit on myself.”

From the foreclosure “epidemic” — in which Zalewski had likened himself to “a drone that flies over the battlefield in Afghanistan” — Moore shifts his focus to Wilkes-Barr, Pennsylvania, a town that closed its juvenile detention facility in 2002 before ceding land to a private corporation who promised to perform the same tasks, though not before billing an $8 million dollar construction project to the state, and acquiring a $58 million lease from it. But it gets even more sinister, because although PA Child Care incarcerated thousands of offenders between 2003 and 2006, the two judges responsible for the convictions were later indicted themselves for taking millions of dollars in bribes to pack the facility. Moore closes this segment by interviewing a former “delinquent” who explores his new-found freedom by training as a pilot, before telling us that most US commercial airline pilots earn less income than a manager at Taco Bell.

Moore then explores the contradictions of corporate greed by showing that, even after it had received bailout money from the US government, Bank of America refused to pay factory workers at Republic Windows and Doors the salaries that were interrupted when their employer closed abruptly after defaulting on a loan it had acquired through the bank. Thanks to the sit-down strike that ensued — and no doubt due, in part, to support from President Barack Obama — the workers were ultimately paid what they were owed.

But, as in previous efforts, Moore maintains a vexed relationship to capitalism. In this film, he interviews several Catholic priests who equate capitalism with sin. He even visits a museum to read an original copy of the US Constitution, noting that although the words “we,” “union,” and “welfare” appear in the document, the term “capitalism” does not. Yet, when Moore chronicles corporations who enable their employees to be owners, offering them an opportunity to shape policy, one wonders whether he thinks “capitalism” is the culprit or whether he simply believes the true culprit is corporate greed, in the same way that it remains unclear whether his primary target in Fahrenheit 9/11 is US democracy or the Bush administration. In this regard, his expressed effort to promote a keener sense of democracy as a substitute for capitalism remains unclear in its implications because social critics typically consider these phenomena to be intricately intertwined.

Is Moore troubled by individual acts of corruption, the abuse of public office for personal gain, and fraud, the act of deceiving others to enrich oneself? Or does he believe that the problems he identifies are systemic to US democracy and capitalism? It often appears that he believes the latter but wants us to believe he believes the former.

After all, the most impressive — though most undeveloped segment — in Capitalism is Moore’s discussion of “Dead Peasant” insurance, the phrase used to mark policies that corporations from Bank of America, Citibank, McDonnell Douglas, Hershey, Nestle, Wal-Mart, Proctor & Gamble, Ameritech, American Express, and others have taken out in the name of employees who had no knowledge of the coverage. When Daniel L. Johnson died of cancer, Amegy Bank made more than $5 million on policies it had take out in his name that were never shared with his dependents.

“There is a reason that it is illegal for me to take out a fire insurance policy on your house,” Moore insists, incredulous that any life insurance agency could provide corporations with incentives to have employees “die in accordance with their policy projections.”3 But his characteristic indignation works against him in this segment,for the logic of capital finds it clearest expression not in the pages of Superfreakonomics4 (a book expressly concerned with the way that “people respond to incentives” if “not necessarily in ways that are predictable or manifest”) but in places like the insurance premium or settlement where the violence endemic to capitalism appears self-evident.

As it turns out, there is a precedent for wealthy people to benefit from the death of others. Well into the nineteenth century, life insurance was contested, in part, because it was reminiscent of “graveyard insurance,” a form of gambling in which wealthy men would bet on the mortality of low-income populations, the aged and the infirm — demographics expected to die an early death.5 While fire insurance (especially for homes) and marine insurance (especially for shipped goods) were well enshrined in mundane forms of commerce by the eighteenth century, the human body was considered too sacred to be priced in legitimate market transactions until nearly the middle of the nineteenth century. But if historians have puzzled over the reasons that the US life insurance industry did not take root until the 1840s, they have generally overlooked the fact that the business of insuring slaves was a robust domain of commercial traffic from the 1830s onward. As early as 1804, several life insurance companies had debated and dismissed the idea of insuring blacks: they believed that free blacks would put undue stress on premiums for their white clients and decided that, while enslaved Africans were sufficiently regulated by insurance on property (chattel), this particular class of commodity was not worth the risk.

But while some insurance companies decided not to bother with the messy business of insuring slaves, others decided to specialize in it. Already by the 1850s, there were as many enslaved Africans in the Upper South covered by life insurance policies as white men in the northeast. By the time the Civil War arrived, the Baltimore Life Insurance Company could boast that slaves accounted for 2/3 of its business.6 With the legal abolition of slavery in 1865, African Americans could finally qualify for life insurance. By 1870, the life insurance industry was enshrined as a central feature of capital exchange in the US. But the historical relationship between the business of insuring slaves and the history of insuring people in the US suggests that, far from being an anomaly, the notion that some people can take out insurance policies on others is a longstanding American tradition (meanwhile, nineteenth century mortality rates were so high for British planters traveling to Jamaica, that they found it easier to insure their slaves than to get policies for themselves).

This all begs a series of questions that Moore deserves credit for raising, even if he doesn’t explore them: how do corporations decide who to cover with a Dead Peasant insurance policy? Do they have access to employee medical records? Is it based on physical exams they require employees to complete? If not, do they have their own forms of corporate espionage and reconnaissance, replete with methods for hacking into employee health records? What about forms of surveillance (apparatuses for recording and cataloging employee gossip about health care concerns)? Needless to say, this is a topic worthy of sustained attention in its own right. Because while the idea that some employees are worth more to their employers dead than alive is deeply troubling, it is even more disturbing that these policies remain pervasive and profitable regardless of the strong emotional reactions they provoke. It all makes me wonder whether some form of Dead Peasant insurance has been around since slavery was legal, or whether it is a recent innovation designed to build on a technology of capital from a bygone era.

And, I can’t decide which is worse.