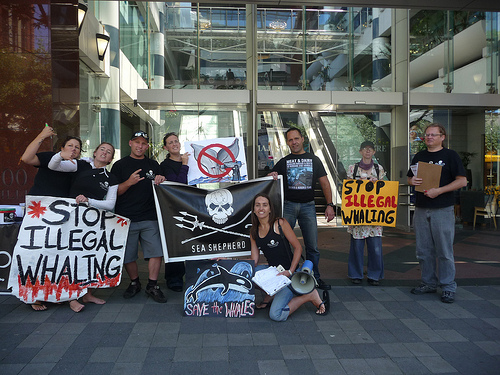 Last fall, after watching At the Edge of the World I became obsessed with the eco-radical conservation group Sea Shepherd who have been around since the 1970s trying to put an end to commercial whaling. I became fond of their use of spectacle and media manipulation among other tactics and started to follow their actions closely and learn their history. So when I learned that I was going to New Zealand for the month of January (for an unrelated geek conference), I was keen to find out whether Sea Shepherd was more present in the public than in the US.

I got my answer the minute I got off the plane in Auckland, as they were splashed all over the front cover of the national newspaper. Of course, the fact that their batman stealth ship-mobile had just been hit (and eventually sunk), I am sure helped them land the coveted spot of the front cover but in general their are a fixed feature of the national political landscape. After going back to port to refuel, they are now back out at sea to interfere with the whaling operations. You can follow their current campaign here.