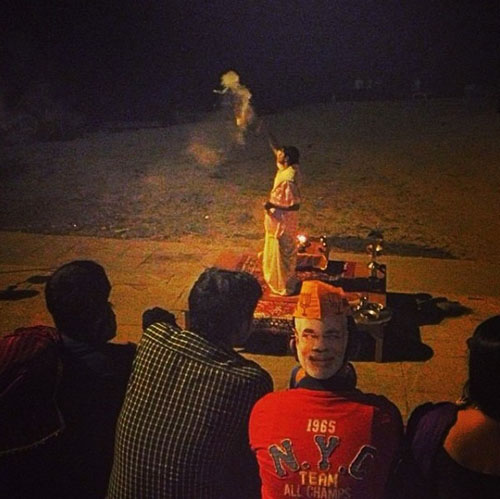 Much like an imitation of reality, a Narendra Modi fan watches the Ganga Aarti [ritual worship] on the banks of Benares (Varanasi), with a mask of the leader placed behind his head, facing away from the priest. Photo by @ravimishraindia.

Every successive takeover of the regime of liberal democracy by political parties such as BJP involves a kind of paradox. The party makes promises to its social constituents and asserts its commitment to the principle of liberty at the same time that it limits the implementation of this principle. Liberty as an enabling principle is little more than a sop to social groups like Dalits in India. But socially dominant groups use the same principle to seek political subordination from the Dalit, on the one hand, and also to consolidate their ability to inflict ritual pollution on Indian Dalits on the other. For the upper caste political class, liberal democracy in India does not create a paradox, but it definitely does so for marginal groups including Dalits.

This paradox gets played out quite prominently in the contradictory responses that the Dalit politicians seem to offer within the constraining logic of liberal democracy. At one level, the arresting march of egalitarian democracy in the Indian context prompts them to acquire an assertive posture against their sociologically constituted, politically perpetuated and historically reproduced forms of exclusion; at another level, the symbolic inclusion sustained by the tendency of possessive individualism that has become so strong among different social groups in the recent years (Behenji Mayawati’s political agenda and the rise of the Dalit millionaire are some developments that point in this direction)[1]Mayawati, the leader of the Bahujan Samaj Party, was the first female Dalit Chief Minister of an Indian state. She has served four terms as Chief Minister of India’s most populous state, Uttar … Continue reading results in taming the Dalit leaders who had begun as protagonists of fully formed egalitarian democracy. The logic of what I call a “leakage democracy” or liberal democracy results in taming the Dalits. The Dalit Panthers of Maharashtra and the Republican Party of India definitely have been dissolved into political insignificance by “leakage democracy.” Leakage democracy could be defined in terms of its compulsion to allow a limited amount of illicit fringe benefits to flow toward its socially marginal classes. Needless to say, the main flow of advantage facilitated by the corrupt version of democracy goes directly to the governing class (bureaucrats), political class (legislators), and the ruling class (corporate). In fact, leakage becomes an organic need for the very survival of liberal democracy everywhere in the world. It is in this sense one has to understand the Congress party’s reluctant lip service to social equity. The NDA government that was formed after 16th of May, 2014, is effecting a shift towards a spoils-of-the-victor mentality, and appears to be using this mandate to exacerbate inequality without cover up. But the Dalit Members of Parliament who belong to the BJP do not seem to oppose this mentality. Nor do they have moral courage to face the Dalit masses that are at the receiving end of the multiple levels of marginalization. The question that needs to be raised is why Dalit representatives belonging to the ruling party speak to the camera with their eyes cast down? Let me attempt a possible answer to this important question.

Dalit representatives find that the pacificatory structures of liberal democracy only assist in the ever growing traumatisation of Dalits. The logic of liberal democracy has a pacifying/normalising impact on the power of dissent that is already active among historically marginalised communities such as Dalits. The accommodation of Dalit leaders within ministries that are relatively insignificant, such as social justice ministry, offers these leaders just the appearance of being powerful. Such rationed forms of entitlement, however, do not enable Dalits to acquire a vibrant generic identity, one in which Dalit would appear in different domains of universal representation not as an identity but as a transformative idea that could be replicated across spheres of national and international importance. Instead, Dalits compete among themselves to remain firmly rooted in a narrow framework of identity. Ironically, to obtain nomination even from the Parliamentary seats reserved for Dalit candidates, they need the support of political parties that retain a Hindutva-oriented mindset.

The political dependence on socially dominant parties does not help Dalits to expand the normative scope of the principle of liberty. In such constraining conditions, Dalits feel quite content to contest elections mainly from constituencies where the seats are reserved for them. Even the recent spectacular victory of BJP does not include a single case of Dalits having been elected from the general seats. It is in fact rare for Dalits to be elected for general seats. The Dalit representatives who continue to be chained to the reserved constituency, however, may not have any reason to feel stigmatised since the general constituency is also counterfactual evidence of this stigma. General constituencies by and large have failed to outgrow their caste and communal cover: general constituencies are divided along caste lines in ways that are somewhat analogous to race-based districting in the U.S. At the moment Dalits have no reason to feel envious of general constituencies as these are plagued with pernicious social infirmities. Modernization and secularization have yet to grip the electorate in its ways of thinking. It is in this sense that the being of Dalits shares ontological ground with non-Dalits. The electoral consciousness of the non-Dalit continues to be embedded in the sociology of caste and communalism. The secular rotation of political office that is the hope of any robust democracy would, however, remain a sham as long as the electorate remains rooted in caste. Thus, the political conversion of demographic preponderance into electoral domination transfigures Dalit politicians into tragic if not comic figures. This political survival of the body language of Dalit politicians could also be understood with reference to the dynamic of political power.

The understanding of the dynamics of political power is analogous to the game of billiards. In billiards it is the player with the stick or cue who exercises control over the strategic manoeuvring of balls. Balls have no autonomy to decide their direction and destination; obviously they depend on being pushed by the player. In Indian democracy Dalit politicians seem to await a “gentle” push from their party bosses, and lack a will of their own. Even those who are asking for Dalit capitalism require such a push for survival, either from the government or from the corporates that are close to some parties for political reasons. The political preponderance of parties whose constituencies are socially dominant adversely impacts Dalits’ moral stamina to stand by the party line, which in rhetorical terms sides with Dalits but tends to substantively undermine their dignity and self-respect. In terms of performative politics on Indian TV, we see Dalit politicians with their embodied shame and silence. One may be pleased with these politicians to the extent that they appear to feel guilty for joining hands with the Hindutva parties and have not become totally banal. Electoral politics places Dalits at an impasse where visibility itself is borrowed at the “good will” of others. If it isn’t, they suffer an invisibility that serves to reproduce inequality and symbolic exclusion. While the dominant cannot ignore the dalits, the latter by and large exist within the vicinity of Indian parliament courtesy of political quotas.

The electoral right Dalits use to elect their political representative offers them a sense of alienated satisfaction that, through elections that occur every five years, they participate in the constitution of parliament. But in their being, the poor Dalits constitute themselves outside the parliament, since the actual communities they belong to, whether Chamar or Valmiki, merge into the abstract category of Scheduled Castes within Parliament. The moment they constitute the parliament, they find themselves not even on its margins.

Within the framework of an instrumental politics, Dalits tried to use the BJP against entrenched Dalit political leadership. However, the BJP co-opted such Dalits with the intention to enlist the electoral support of ordinary Dalits. Those who are making new claims to political representation through new political patrons such as BJP are too willing to walk into the same framework where they stop protesting. Hence when they speak, they look down: their eyes avoid looking into the camera. 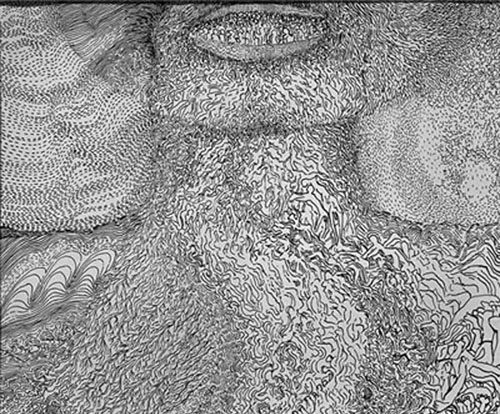