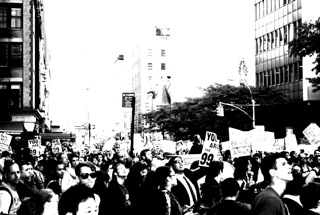 Click here to read. This dossier takes its cue from one of the Occupy movement’s bedrock slogans, “This Is What Democracy Looks Like” (though this was first nurtured, as were many Occupy paradigms, tactics and customs, in the global justice movement that came of age in Seattle in 1999). This proud assertion, stiffened by populist certitudes about the 99% hyper-majority, exercised a clear appeal to protesters. It is self-congratulatory, confrontational, and also quite articulate as a political statement. Not everyone has to believe the slogan to chant it. But what if it were taken up as a more literal goal? What if the Occupy model of horizontalism were to be pushed into every venue of civil society, eventually supplanting the roots of our representative democracy system? Who would stand to gain and who would lose? How would our own institutions, organizations and networks be transformed in the process? The radical innocence of Occupy allowed such questions to be asked. After a year of operations, the record allows some provisional answers to be offered. Read More …Table of Contents