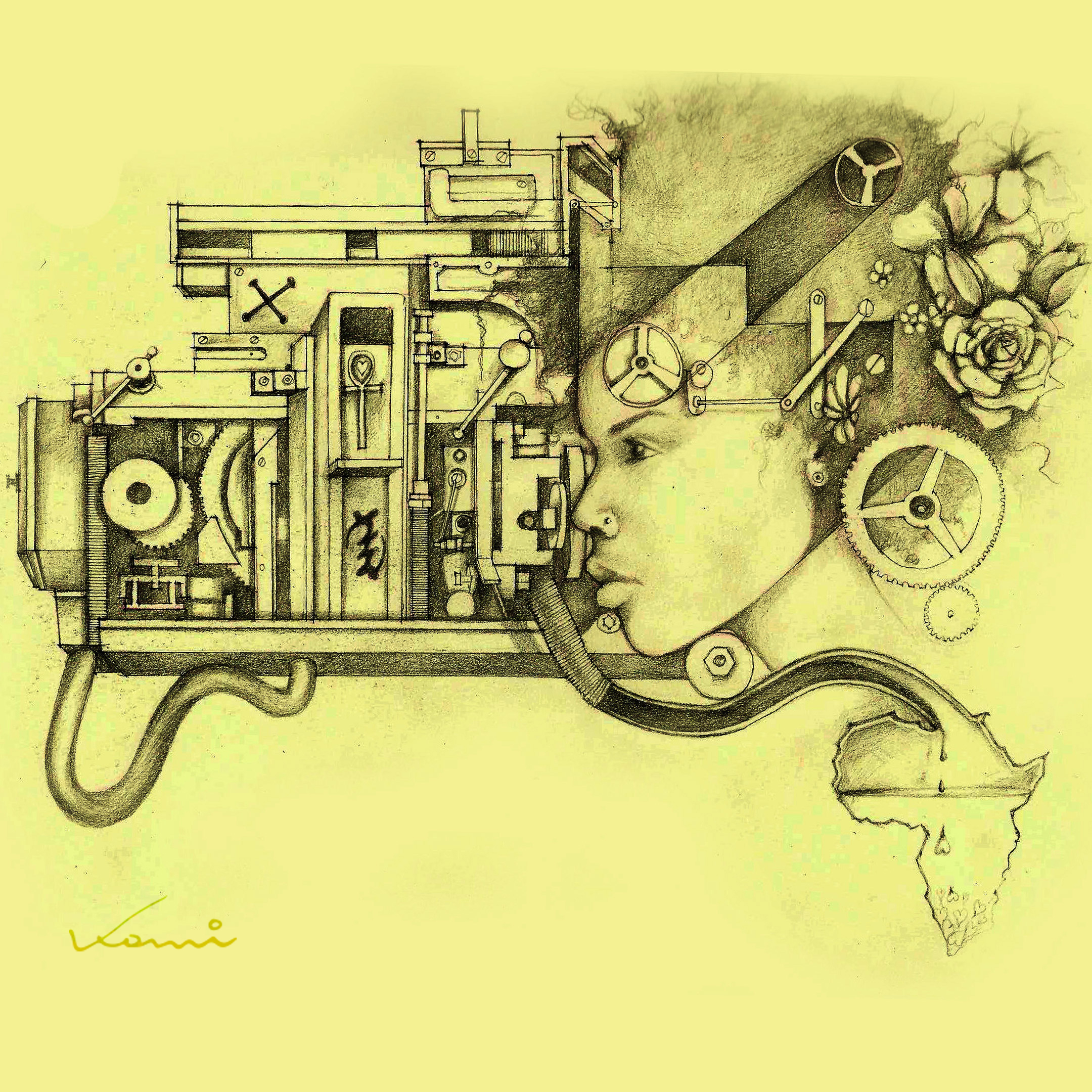 Planetary transformations are rendering that which we call the human to be in a state of crisis. Life has been decelerated in many processes of production while accelerated at the same time in the exchange of information and in digital becoming. Many sectors of the economy and former material products are under threat while other sectors that provide services or produce and analyze information are thriving. Many institutions are being destroyed and reconfigured, and others are becoming less place-based, transforming into part of the cloud. Schooling has been moved online and the process of examination has been challenged and even called into question. And while the main molds that seem to enclose lives are homes, the algorithmic processes of a deeply threaded technosocial world seem to more generatively shape becoming. While this all feels new, it has been argued that this is a crisis that has long been in the making.

In his now thirty-year-old essay “Postscript on the Societies of Control” (hereafter referred to as “the postscript”), Gilles Deleuze argues that transformations from disciplinary societies to control societies has produced a generalized crisis. Since World War II, societies have been shifting from systems of institutional enclosures disciplining the ways of being of citizens to systems of infinite and continuous modulating mechanisms, generatively controlling access and human behavior. Digital technologies and the Internet of Things have enabled increasingly more distributed logics, rationalities, and practices of governance via cybernetic systems of communication and predictive control. This is what Deleuze prophetically articulated in his now well-known essay on increasingly networked societies where computation has become the main engine—the essay that, on its thirtieth anniversary, is the occasion for this Periscope. Inspired by Deleuze’s essay and a speaker series that I founded and co-curated at the University of Pennsylvania with colleagues James English and Jessa Lingel, this Periscope features a collection of essays that engages Deleuze’s societies of control, centering questions on ontologies of difference while also reflecting on this current moment of crisis, pandemic, and apocalypse.

The postscript takes up Deleuze’s rethinking of Michel Foucault’s disciplinary societies in order to account for the increasingly networked societies that have begun to reconfigure the organization and processes of power and capitalism, wherein the same mechanisms are both “liberating and enslaving forces” (4). In control societies, discipline is no longer based on a decentralized system where the corporeal shaping happens via the awareness of the possibility of being visible to authorities of surveillance. Control societies are characterized by a distributed system that consists of continuous visibility across time and space and the short-term regulating of movement and acts via modulation. As Deleuze states, in control societies, “The numerical language of control is made of codes that mark access to information, or reject it.” If disciplinary societies might be characterized by parametric modeling and population census data, and perhaps also associated with Foucauldian analyses of how such measures structure society, control societies are characterized by a more invasive “becoming-statistic” in which social metrics are actively mutated along with that which they measure. In Deleuzian terms, this shift corresponds to a shift from the individual to a system of dividuals—a term that departs from modernist conceptions of the “individual” and “society.” Borrowing from William Burroughs, Deleuze’s conception of control is not about influence or restraint, but rather a logic, or, following Alex Galloway, a protocol, that gives the impression of freedom while one’s choices and behaviors are modulated and generatively shaped for them. While Deleuze argued that the bodily shaping of disciplinary societies was displaced by the generative becoming of control societies, others have argued that discipline and control technologies continue to exist in oscillation.

Despite the powerful speculative intervention of this short essay, there are still important questions to ask, especially in our current moment. While there is reference to a type of generalized enslavement in this essay, where are the forces of raciality and postcoloniality in societies of control? Where might the “flesh” configure and who is counted in the formation of the human under the dividual? How might the recursion of a universal epistemology of the modulating mechanisms maintain the changing same? And, how might that recursive system be broken open toward transforming? In what ways does the postscript’s focus on the dividual overlook the potential peer-to-peer subjection? How might cybernetics discourses of homeostasis and resilience intersect with the Black Lives Matter movement? Each of these questions are taken up in the contributions to this Periscope.

The first entry by Denise Ferreira da Silva examines how the joint formation of humanity and raciality shaped discourses of governance and the political in the twentieth century and how both of these analog presents continue to shape our digital future. By engaging Black Mirror, the COVID-19 pandemic, and the Black Lives Matter movement, she considers the question of whether raciality is “at work here” and argues definitively that it is. Alexander Galloway’s essay takes up the question of Deleuze’s theoretical import for today. Galloway traces the terms of the existing discourse from new materialisms to postcolonial and radical Black feminist studies to Indigenous studies to the work of Catherine Malabou. He points toward a philosophical coupling rather than a “breaking up with Deleuze.” In the third entry, Orit Halpern discusses the history of science and systems theories about resilience, tracing the discourse from ecology to economics as well as other social sciences while also making direct connections to the Black Lives Matter movement. Her push, with Kara Keeling, is to rethink resilience in terms of anti-fragility in the focus on the humanity of Black lives. In the fourth contribution, Martina Tazzioli discusses the implications of the social distancing measures of the pandemic and their influence on peer-to-peer subjection. In the context of the global protests in the wake of George Floyd’s murder, she designates these acts as border abolitionism, “a series of political practices apt at unsettling the racializing bordering mechanisms that underpin both state surveillance and the policing of oneself and of the others.” Finally, in the last contribution, Luciana Parisi and I introduce a concept, recursive colonialism, that we have been developing for a few years and that began from our conversations during Parisi’s Control Societies speaker series visit. Situated in a post-apocalyptic condition, we provide a theoretical articulation of the forces that produce a recursion in a universal epistemology of colonialist logic. Additionally, we turn our intervention toward an analysis of how to break away from this recursive system to move toward a cosmo-computation that will bring about an abolition of Man and its epistemological domination.

Each of the contributions to this Periscope point toward how the current pandemic has shaped an apocalyptic condition for a global uprising that necessitates many questions and much analysis. While Jacques Derrida’s term autoimmune was a critical vision of the political that refers to the mutating cells from within a nation-state that attack the state (most classically applied with Boeing planes weaponized in the case of 9/11), this pandemic, as Yuk Hui argues, can be understood as a collapse of the biological and political. It’s not the body that’s autoimmune nor is it simply the state, it’s the body politic and the state that is autoimmune producing both medicalized and public health responses with militarized and police repressive practices to maintain “shelter-in-place” orders and tightening/closing of the borders. Restricting movement, surveilling practices, minimizing contact, maintaining physical distance, and denying access or entry to anyone from outside the nation-state borders and especially from global “hotspots” have become common practices of governments. The mutated cells here are not COVID-19, but the government infrastructure and response to the pandemic, some of which were unconscionably late and others of which were eugenic in spirit. Under these terms, Hui argues, racism can be plainly seen as an immunologic of the state, instituted toward mitigating the ongoing transmission, and even toward the political economic interest of “re-opening” the economy. This, along with the documented disproportionate infection and mortality rate in communities of color and the murders of Ahmaud Arbery, Breonna Taylor, and George Floyd, set the painful and dire conditions for a global uprising against anti-Black violence. Thus, as Deleuze states, “There is no need to fear or hope, but only to look for new weapons.” The people found their new weaponization on social media and in the streets and the authors of this Periscope consider and explore the necessity for new theoretical weapons. Only with such agonistic practices can this generalized crisis-become-apocalypse break open toward alternative futures.

Ezekiel Dixon-Román is an associate professor in the School of Social Policy Practice at the University of Pennsylvania. His interdisciplinary scholarship is focused on the cultural studies of quantification and critical theories of difference. He is the author of Inheriting Possibility: Social Reproduction & Quantification in Education (2017) and is currently working on a book project that examines the haunting formations of the transparent subject in algorithmic governance and the potential transformative technopolitical ontoepistemologies.