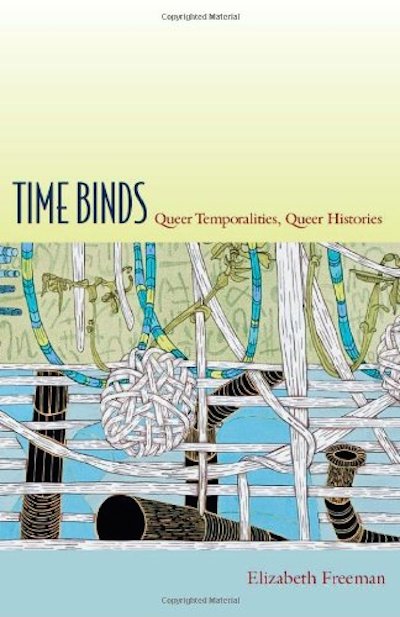 This Social Text: Periscope dossier arises from a two-day intensive seminar, Queer Temporalities: Reading Elizabeth Freeman’s Time Binds, a collaborative event co-organized by The(e)ories: Critical Theory and Sexuality Studies, which was held at University College Dublin, Ireland in November 2011.[1]The event was organized by Noreen Giffney, Anne Mulhall and Michael O’Rourke. We appreciate the support of Gerardine Meaney and the Humanities Institute of Ireland for making it happen. As well as … Continue reading On the first day of the seminar, Freeman presented a paper arising from her current research, ‘Theorizing the Chronic,” in which she unfurled some of her new thinking around chronicity, disability and the work of Gertrude Stein.[2]For more about Freeman’s current preoccupations see her response essay in this dossier. The second day of the seminar featured three panels each with three short responses to Freeman’s book, with a focus on discussion, and Freeman herself engaged with and contributed to our conversations with great generosity. In addition to this editors’ introduction and Freeman’s response to the responses, this dossier features five short papers selected from the Dublin seminar, each of which takes up Freeman’s work creatively, critically and expansively from different disciplinary positionings and political perspectives, demonstrating the vital importance of Time Binds for contemporary queer studies and for our thinking about temporality.[3] Elizabeth Freeman, Time Binds: Queer Temporalities, Queer Histories (Durham: Duke University Press, 2010). In addition, the dossier, we hope, provides a window on to the vitality, range and specificity of contemporary queer studies in Europe and elsewhere given that the respondents come not from the hegemonic location of US queer theory (with the exception of Freeman herself, of course) but from Ireland (Mulhall, Mulvany, O’Rourke, Watson), the United Kingdom (Davies) and Australia (Cadwallader).

The folds and unfoldings of “queer time” have been a dominant strand in queer theory over the last decade, to the extent that one could speak of a “temporality turn” in which Freeman’s work has been one fulcrum, both in some of the essays collected in Time Binds and in her curation of the important 2005 GLQ roundtable, ‘Theorizing Queer Temporalities’.[4]See Elizabeth Freeman (ed.) Queer Temporalities, special issue of GLQ 13.2/3 (2007) especially the roundtable discussion. Other important works (and this is a select and by no means exhaustive or … Continue reading In her most recent book (and subsequent essays), Freeman addresses a number of ways in which this attention to temporality has inflected discussions of queer subjectivity, desire, identity and queer historiography.[5]For a more recent example see Freeman’s “Lessons from Object Lessons” in Feminist Formations 25.3 (Winter 2013): 170-174. In this essay, part of a dossier on Robyn Wiegman’s Object Lessons, … Continue reading Outlining ‘a dialectic between time and history’ in queer theory – the conflicts and abrasions between deconstructive and Marxist critical and political commitments – Freeman notes the key text in the queer temporal turn, Derrida’s Specters of Marx.[6]Jacques Derrida, Specters of Marx: The State of Debt, The Work of Mourning and the New International, trans. Peggy Kamuf (New York: Routledge, 1994). See O’Rourke and Mulvany on hauntology and … Continue reading While Derrida’s hauntology has brought “to queer theory the idea that time can produce new social relations and even new forms of justice that counter the chrononormative and chronobiological” through an attention to the “sensate”– to the uncanny and braided effects of enfleshment and affect – Freeman notes that even this liberatory synthesis is always already predicated on a valorization of pain, trauma, and unpleasurable ruptures: “none of these formulations engages with what might be called vulgar physical pleasure.” (10) The modern subject arises in the interstices where “chrononormativity” and “chronobiopolitics” meet: the binding of “flesh into bodies” through the implantation of particular temporal modes (7) and the installation of such time-bound bodies within the temporal rhythms and trajectories of the nation-state, capitalist production and “even non-nationalist cultural belonging” (xi). The “sexual dissident,” Freeman notes, is to a degree “produced by” this “sense of modern temporality” (7). However, within the regimes of “modern” temporality, Freeman avers, and particularly as inflected by the uncanny temporalities of the Freudian unconscious and its influential “queering” in Judith Butler’s account of melancholy gender, the queer subject emerges as particularly bound to trauma and loss; to a stuttering in the oedipal structure, a melancholic refusal to relinquish traumatic identifications across the thresholds of the body, of history, of death. Within queer theory, then, the subject’s emergence as a ‘wounded morphology’ opens out into (while simultaneously exceeding, not being wholly captured within) a collective bound together by a socio-historical “skin” likewise limned as a wounded morphology. Why, Freeman asks, this monolithic insistence on pain and trauma as that which binds the queer subject and queer transhistorical identifications and collectivities? What, on the other hand, would an attention to a hauntology that focused on erotic pleasure, on bliss, unfold in the oscillating warp and weft of queer temporalities and the subjects that such queer times traverse, bind and undo? In her analyses of literature and film, Freeman demonstrates what emerges through an attention to the erotic conjunctions of bodies across temporal thresholds rather than to the dynamics of loss and lack that inform a focus on desire as the vector of cross-temporal longing and belonging, and how such queer temporalities might begin to undo the givenness of our governing regimes of the chrononormative and the chronobiopolitical. In this Periscope Dossier, the respondents pay close attention to and expand on aspects of Freeman’s groundbreaking work with a particular focus on the innovative forms of queer critique and textual analysis that her book and its conceptual and critical frames opens out.

In the opening response Ben Davies unpacks and delineates his Barthesian concept of lingeringly “slow reading,” of how textual encounters can be binding and unbinding, and the many ways in which a certain erotics attaches to and is woven into the very binds, textures and tissues of reading.[7]For more on slow reading see the special issue of borderlands e-journal on “Slow Criticism”: http://www.borderlands.net.au/issues/vol10no1.html. In her essay Jessica Cadwallader considers the use of chrononormativity, temporal drag and anachronism as conceptual frameworks in relation to trans, and specifically Susan Stryker’s famous essay “My Notes to Victor Frankenstein Above the Village of Chamounix: Performing Transgender Rage” (a performance and then a paper published in GLQ). Cadwallader ruminates upon the ways in which Time Binds enables an exploration of the use of written styles in Stryker’s piece in terms of their erotic transfers across time, their trans-historical engagements with technology, gender and monstrosity. In a reading of Anne Enright’s novel The Pleasure of Eliza Lynch Maria Mulvany looks at the broader applicability of Freeman’s concept of erotohistoriography (the pleasures of Eliza[beth] Freeman), particularly in relation to the complex interrelations between trauma and bliss in the work of the Hungarian psychoanalysts Nicolas Abraham and Maria Torok. As with Cadwallader’s this response takes up questions of affective histories, erotohistoriographics and hauntology. With a differently inflected psychoanalytic approach Eve Watson takes as a guiding point the notion of “Lacanian time” in order to explore how queerly temporal the unconscious is. Her response interrogates Freeman’s ideas of queer history and Virginia Woolf’s a-historical novel Orlando in order to show how the “construction” of history and temporality produces human subjectivity, with subjectivity being what momentarily emerges in trace form under precise temporal conditions that defy standard notions of time, historicity and normativity. In keeping with Davies’ emphases on fingers and hapticity and Mulvany’s discussion of the mouth as tactile Watson performs a close reading of Woolf’s fingering of the abyssal void and punctuation (the single dash –).

In her response Anne Mulhall takes as her focus the racialized regimes governing migration and its temporalities in contemporary Europe. She asks whether what must be occluded in such an account – the racialized modes of waiting deployed within the asylum and deportation regimes perhaps partially elided in Freeman’s focus on the potential queer disruptions opened up by the modalities of waiting involved in interracial S/M might point up some of the difficulties involved in a focus on pleasure rather than trauma in relation to racialized and classed subjects out of synch with chrononormativity yet bound in particularly punitive ways by the slow time of the chronobiopolitical.[8]For further consideration of slow time and the chronobiopolitical in relation to classed, sexed and raced subjects see Lauren Berlant’s Cruel Optimism (Durham: Duke University Press, 2011). Michael O’Rourke’s essay is an avowed over-reading of Freeman’s text alongside the quantum physics of Karen Barad and Judith Butler’s recent work on dispossession, survival, solidarity and the political promise of performativity.[9]Karen Barad, Meeting the Universe Halfway: Quantum Physics and the Entanglement of Matter and Meaning (Durham: Duke University Press, 2007); Judith Butler and Athena Athanasiou, Dispossession: The … Continue reading This note of aleatory interruptivity, persistence or continuity is what animates Elizabeth Freeman’s response to the essays, not just in the sense that we need to keep on reading and re-reading her book Time Binds, but also how, in the wake of deconstruction, her work on chronopolitics invests itself in modes of endurance, keeping going, and in reading itself as an embodied practice or rhythm of time (Davies, Cadwallader and Mulvany are all similarly invested). In placing an accent on recursive modes of temporalization (taking her cue from Judith Butler’s own focus on recursivity) Freeman is able to emphasize forms of repetition which are insistent (José Muñoz’s work on brown structures of feeling and queer utopia is instructive here too), about forms of being extant or not going away, of occupying time. In opposition to a compulsory chronoreproductivity—which would be bound up with heteronormative paradigms—Freeman argues for a keeping on which would, on the one hand, not be in thrall to futural directionality, but, on the other, would in its temporal skewing hold out the promise of some lateral agency. This dossier registers for the readers of Time Binds (and its author) the after-effects, interruptions, drags and shocks of reading slowly, carefully, and closely, of occupying oneself with the book. What it registers, at the same time, is that expansions of and engagements with Freeman’s work are chronically open, in both precarious and joyful senses, to other futures.