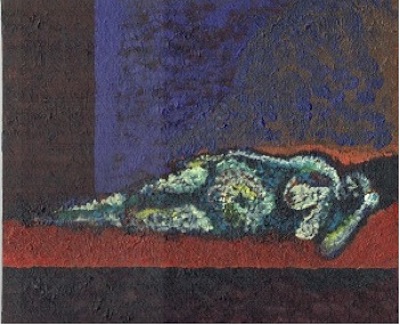 The promise of a voluptuous encounter with the past is arguably one of the most seductive aspects of Time Binds. Emboldened by a refusal to “give up on sex and sociability” (xxii) in the face of what she identifies as queer theory’s particularly “lush account of how the mourning process bodies forth gendered subjects” (11), Elizabeth Freeman seeks to re-establish pleasure as a legitimate historiographical method for engaging with the past and the body as “a tool to effect, figure, or perform” this encounter (95). Her study mines a combination of canonical and more obscure works of “ephemeral media” for moments that might allow us to address the past in a language other than that of trauma. For Freeman, “history is not only what hurts but what arouses, kindles, whets, or itches” (117). In what follows, I would like to reflect on the broader applicability of Freeman’s concept of erotohistoriography, an aspect of the book that I have found particularly enabling for my own psychoanalytically-inflected approach to the spectrality of contemporary Irish historical fiction.

Introduced in chapter three, Freeman’s theory of erotohistoriography is configured as a reparative critical mode that “admits that contact with historical material can be precipitated by particular bodily dispositions, and that these connections may elicit bodily responses, even pleasurable ones, that are themselves a form of understanding. It sees the body as a method, and historical consciousness as something intimately involved with corporeal sensations” (95-96).

Rethinking the concept of pleasure as a means of historical understanding, Freeman traces its effacement from contemporary historiographical practice through a rigorous close-analysis of Mary Shelley’s Frankenstein or the Modern Prometheus, Virginia Woolf’s Orlando and Hilary Brougher’s film The Sticky Fingers of Time, exploring how “pleasure – instead of appearing as foundational to a discipline or identity – flashes up from the past as the loser in bygone battles over what the discipline of history itself should become” (95). Pleasure thus emerges as an encrypted, affective historiographical mode that haunts legitimated cognitive modes of historical understanding and as such expands the concept of haunting, as the primary product of unprocessed historical trauma by introducing pleasure as a potential supplementary source of historical and narrative spectrality.

Freeman explores a moment of dialogue in Sticky Fingers where the character Gorge recalls a scene from her friend Drew’s unpublished novel that establishes an intertextual relationship to Frankenstein. Drew rewrites the monster’s death-scene, imagining how he “splits his stitches and he dies, fertilizing the earth where that little girl grows tomatoes” (114). Freeman reads this scene as a “corporeal form of a delayed communion” with the past whereby the monster’s pain is remade as a source of pleasure and nourishment for the little girl who eats the tomatoes fertilized by his corpse (115).

For Freeman, the scene hints at the possibility that “erotic bliss may be as potentially “historical” as trauma” (118). While reading this section of the book, I was particularly struck by the continuities between it and Anne Enright’s novel The Pleasure of Eliza Lynch (2000), a contemporary Irish example of the erotohistoriographical genre and one that effectively stages some of the tensions inherent in Freeman’s project, particularly in relation to the recuperative powers of pleasure in the face of deep-seated historical trauma. My brief invocation of the novel aims to draw out some of the more subtle strands of Freeman’s theory of erotohistoriography, and specifically her use of Maria Torok’s reworking of melancholic incorporation and Karl Abraham’s theory of mania as the theoretical underpinning for her turn away from trauma and towards pleasure as a particularly generative queer historiographical mode.

Set between nineteenth-century Paris and Paraguay, The Pleasure of Eliza Lynch presents a fictionalized biographical account of the real and controversial Eliza Lynch (1835-1886), an Irish woman from Cork who escaped to Paris during the Irish famine of the 1840s, became a courtesan to the Paraguayan dictator Francisco López (1826-1870), and acted as a kind of illegitimate first lady in the years leading up to the devastating war between Paraguay, and the Triple Alliance of Argentina, Brazil and Paraguay. Enright’s non-linear narrative is communicated by a number of non-sequential, disjointed diary entries. It is written in parallel registers, alternating between the embodied first-person perspectives of the pregnant Eliza on board López’s boat on its journey from Paris to Paraguay and the third-person narrative of Doctor Stewart who gives an account of life in Paraguay after their arrival.

The novel’s visceral engagement with the body and foregrounding of the corporeal opens up alternative ways of encountering the past and provides a complex staging of the Gordian relationship between the body, history, trauma and pleasure, particularly in the Irish cultural imaginary. Attributed to Ireland’s postcolonial relationship with Britain, this knotted relationship between the body, trauma and pleasure is also part of the legacy of the Irish famine – a traumatic event (resulting in the death of one million people and the emigration of a further million) that has had a lasting impact on social formation in Ireland.

Images of food and its consumption abound in the novel as each chapter is named after a certain food or drink: ‘A Fish’, ‘A Melon’, ‘Asparagus’, ‘Veal’, ‘Truffles’, ‘Champagne’ and ‘Coffee’. Eliza Lynch’s relationship to history is figured through images of eating, as her recollection of historical events is frequently accompanied by elaborate descriptions of food. The apparent ferocity of Eliza’s appetite is communicated through repeated images of cannibalism as rumours circulate about her desire for “the flesh of the dead” (Enright 135), a proclivity linked to Eliza’s childhood experience of the famine. On the journey to Paraguay, her insatiable desire for a melon leads her to imagine a garden somewhere, at the back of a shack, “where a little old man has tied plants on to canes and watered them and shielded them from the sun” (Enright 38).

She fantasizes about eating a forbidden melon that has been grown in the ground fertilized by the corpse of this old man’s dead wife. Her response to the man’s fantasized refusal of this melon, because, “the flesh of it is the same as the flesh of his wife” is to tell him that she has “no problem eating his dead wife” (Enright 39).

This scene is felicitously reminiscent of the little girl eating tomatoes fertilized by the monster’s seed in The Sticky Fingers of Time. The focus on the pleasure of eating and Eliza’s nonchalance at sating her hunger by consuming fruit fertilized by the dead recalls the relationship between eating, incorporation and temporality and Freeman’s notion of the mouth as a “tactile rather than verbal instrument for historical transitions, for scenes of historicist binding” (118). The particular use of the word “melon” with its linguistic proximity to “melancholia” highlights how these instances of eating literalize the melancholic psychical process of incorporation as an “eating of the past” (whereby the subject incorporates and encrypts the lost object within the body) and, for Freeman, evokes the possibility of being nourished rather than purely traumatized by it.

Responding to Freud’s failure to account for the role of “mania” within his theory of melancholia, Maria Torok’s theory of the “illness of mourning”, after Karl Abraham, identifies mania as the result of an inappropriate increase and eruption of libidinal desire in the immediate aftermath of a loved one’s death and proffers this outcome as the result of an incomplete process of introjection. Freeman draws on Torok’s suggestion that “the melancholic’s entombed secret is not a loss at all; rather, it is “an erotic effusion” repressed and mnemonically preserved” (119) and uses this notion to configure the relationship between the past and the present in pleasurable terms. Such a model allows us to imagine supplemental ways of engaging with the past or in Freeman’s terms, alerts us to the “possibilities of being haunted by bliss and not just by trauma” (120). However, despite the emancipatory potential of a purely pleasurable and sensory relationship with history, within Torok’s account, the “erotic effusion” of past pleasures is still primarily configured as “inappropriate” and is thus accompanied by feelings of self reproach and the negative affects of “shame, astonishment, hesitation” (Torok 109), alerting us to spectral traces of pain in any account of a pleasurable engagement with history.