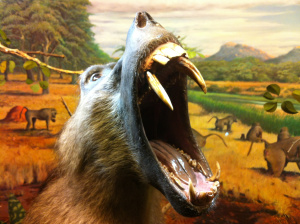 I think today must go down in history as the moment when humanity collectively failed to secure its own future. It also has to be seen as one of the greatest crimes of the rich and powerful of the world against the vast majority of humanity that has ever been committed.

Although I won’t hear the full skinny on final negotiations inside the COP17 conference until later in the day, it’s already clear that the news is not going to be good.

Here’s what former Bolivian ambassador to the UN Pablo Solon had to say in a hasty email sent out while negotiators sprinted towards the finish line last night:

A few moments ago we found out the decisions that they have been cooking behind the scenes. In Durban they won’t approve a second period of commitments of the Kyoto Protocol. This will happen at the end of next year: in COP18. In Durban they will only take note of the draft amendments and the “intention” of rich countries to reduce greenhouse gas emissions. The Kyoto Protocol will lose its heart. The promises of reductions by rich countries will be incredibly low until 2020 and will lead to a temperature increase of more than 4 degrees C. The Kyoto Protocol will turn into a Zombie without a global figure for reduction of emissions by industrialised countries, and will carry on walking until 2020 just so that carbon markets don’t disappear. In 2020 it will enter into effect in “a new legal framework applicable to everyone”. By everyone, they mean diluting the difference between developed and developing countries, between countries responsible for climate change and those who victims. The US managed to eliminate any mention of a “binding” agreement. That means the “new legal framework” will be an empty gesture without any effect. This will become known as the lost decade of the fight against climate change. Genocide and ecocide will reach proportions that we have not yet seen. The Great Escape by the Rich has turned into the Great Swindle.

Solon does not toss around terms like genocide and ecocide carelessly. The failure to agree to a just and binding replacement for the Kyoto Protocol, the only climate agreement that humanity has ever reached that had any real teeth, signals the inability of humanity in general, and the rich nations in particular, to agree on a course of action that goes beyond competitive, short term interests. We’re essentially looking at a world in which inter-imperial tensions are being ratcheted up, leaving the rulers of powerful nations thinking only about their defensive interests. The killing irony is that this
behavior will only ensure greater hostility and competition.

If one looks at the geologic record, it’s clear that human beings have enjoyed a period of extraordinary environmental stability over the last 10,000 years. It is likely that this stability would have ended one way or another at some point, but, with the failure of negotiations at COP17 to achieve any of the goals that the climate justice movement has been pushing for, we have ourselves ensured that this window of stability will close quickly and ferociously.

It’s hard not to think that we’re not all that different from other primates. Despite our vaunted claims to self-consciousness, historical awareness, and collective rationality, at the end of the day we seem to be ruled by the basest of our passions.

Today we have ensured that we will be unable to take our fate into our own hands. And it is the poor and weak, people like the rural farm women I’ve met over the last two weeks during my stay in South Africa, who will be the first to be devoured by the holocaust we are unleashing.