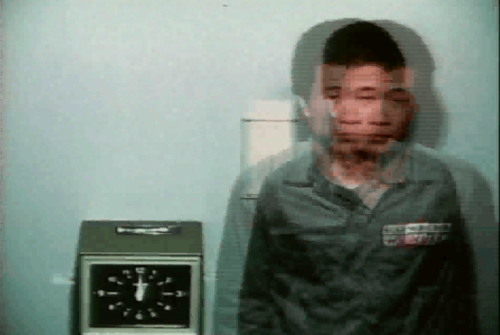 While the artist Tehching Hsieh has enjoyed some resurgent interest in his work through the Museum of Modern Art’s “Performance” series and the Guggenheim’s “Third Mind” exhibition, it is with the publication of Out of Now: The Lifeworks of Tehching Hsieh that a truly satisfactory and in-depth resource for engaging his art has emerged. Hsieh is a Taiwanese-American artist who carried out six major durational performances after immigrating to the United States in 1974, five of which lasted for one year and the final of which lasted thirteen. For each performance, Hsieh would develop a highly restrictive set of rules and a means of documenting his adherence to them, then release these as a statement of intent and invite audiences to view his work on select dates throughout the year. These performances were endurance acts of spatial and temporal constraint, all characterized by an astounding formal minimalism: the first confined him to his imagination as he sat inside a cell in his studio space; another bound him and the artist, Linda Montano, with an eight foot rope that remained their only source of contact. For an artist whose work has remained a touchstone for many students of performance and body art, it’s surprising that Out of Now is the first sustained examination of Hsieh’s durational works. The monograph itself is a formidable object that contains six essays by the art scholar (and book editor) Adrian Heathfield; an extensive and illuminating interview between Hsieh and Heathfield; several short letters addressed to Hsieh by fellow artists Marina Abramović, Santiago Sierra, and Tim Etchells, as well as the performance theorist Peggy Phelan; and, what is most exciting, extensive reproductions of the many ephemera that remain from each of the performances. Alongside his self-released DVD-ROM, which contains videos and timelines of his works, the two releases are by far the most comprehensive collection of the many legal, photographic, promotional, and evidentiary traces of the One Year Performances.

Adrian Heathfield’s six essays are divided according to the different variations on the theme of time that Hsieh’s works engage. Instead of ceding to the tendency — reflexive in performance criticism, he argues — to attribute the rupturing temporality of the “event” to time-based art, Heathfield instead focuses on the phenomena of duration in Hsieh’s performances (13). Further, his exploration of duration as the slower temporality through which Hsieh’s art unfolds provides the clue into what that hybridized term in the subtitle, “lifework,” means. Though early in the monograph Heathfield claims that lifework indicates “that these artworks are made from the very material and experience of a life” (which artworks aren’t? we might respond), by the end of his very nuanced set of essays I for one am more convinced by his argument that Hsieh’s protracted durations re-work the conditions that produce and support the subject across time (12, 56-58). This fidelity to Hsieh’s works accords well with his stated intention to challenge the traditional monograph form of writing about a subject by instead writing with one.

Continuing with the theme of duration, I find that while going through the documentation of Hsieh’s performances in the monograph (62-317), as well as the videos on the DVD, I’m drawn by what the literary theorist Sianne Ngai calls “stuplimity” — a mix of astonishment and boredom that she detects in the massive taxonomic works of figures like Gertrude Stein, Ann Hamilton, and Samuel Beckett. As Ngai explains, stuplimity is “marked by extended cycles of exhaustion and recovery […] rather than by an abrupt, instantaneous defeat of comprehension” (Ngai 277). In short, it is a feeling that manifests through the experience of a series more than through any individual moment contained within it. Further, I believe this feeling testifies, not only to how Hsieh’s works affect a gravitational pull into the density of time’s passing, but to how they transmit difference through repetition, as the strictures that are the works’ conditions of production and reproduction prove unable to contain the amount of variation they would seem to delimit. Perhaps the best example of this is the film of One Year Performance 1980-81 (a.k.a. Time Clock Piece). For this work, Hsieh claimed that he would punch a time clock, every hour on the hour, for one year and document each punch with one still, taken with a 16mm film camera. The result is a 13-minute time-lapse film that features Hsieh, as a jittery figure with sprouting hair, alongside clock hands that spin wildly and a punch card that mechanically fills and depletes with the hours that pass. The stills, reproduced in the monograph (128-158), allow the reader to consider these internal variations at a reduced pace, but not with any more taxonomic ease. The same can be said for the reproduction of the maps that document Hsieh’s travels around New York City in One Year Performance 1981-82 (a.k.a. Outdoor Piece): it can prove as mentally exhausting as shocking and exhilarating to trace the borders of Hsieh’s daily travels around lower Manhattan, which he marked with a red pen on otherwise largely identical maps.

Finally, it bears mentioning that Heathfield is first and foremost an art historian, and that while I welcome the careful focus he gives to the place of Hsieh’s work within art history, I do find that the word “life” does a lot of work in his analysis without much examination. If Hsieh’s work complicates the identity of “art” as it drives toward life, couldn’t we likewise say that his work complicates what we mean when we say “life?” These works after all are embedded within biopolitical durations: within technologies of surveillance and imprisonment; within the temporal rhythms and spatial constrictions that constitute the labor process; and within the discursive emergence of “quality of life” as a regulatory model for the aesthetic order of urban space, especially in New York City in the 1980s. In part, Heathfield refrains from this line of argument because, I believe, he wants to insist on the singularity of Hsieh’s life (he refers throughout not to life in general but to art made from a life); it also helps that Hsieh himself refuses both contextual limits to his work and the designation of “political artist” (324 & 330). But these qualifications defer rather than resolve the question of how Hsieh’s lifeworks agitate across the history and politics of life as well as art. All that said, though, this remains a minor quibble with Heathfield’s otherwise excellent essays, and one that, if anything, indicates how far the conversation on and with Hsieh’s works has yet to go.