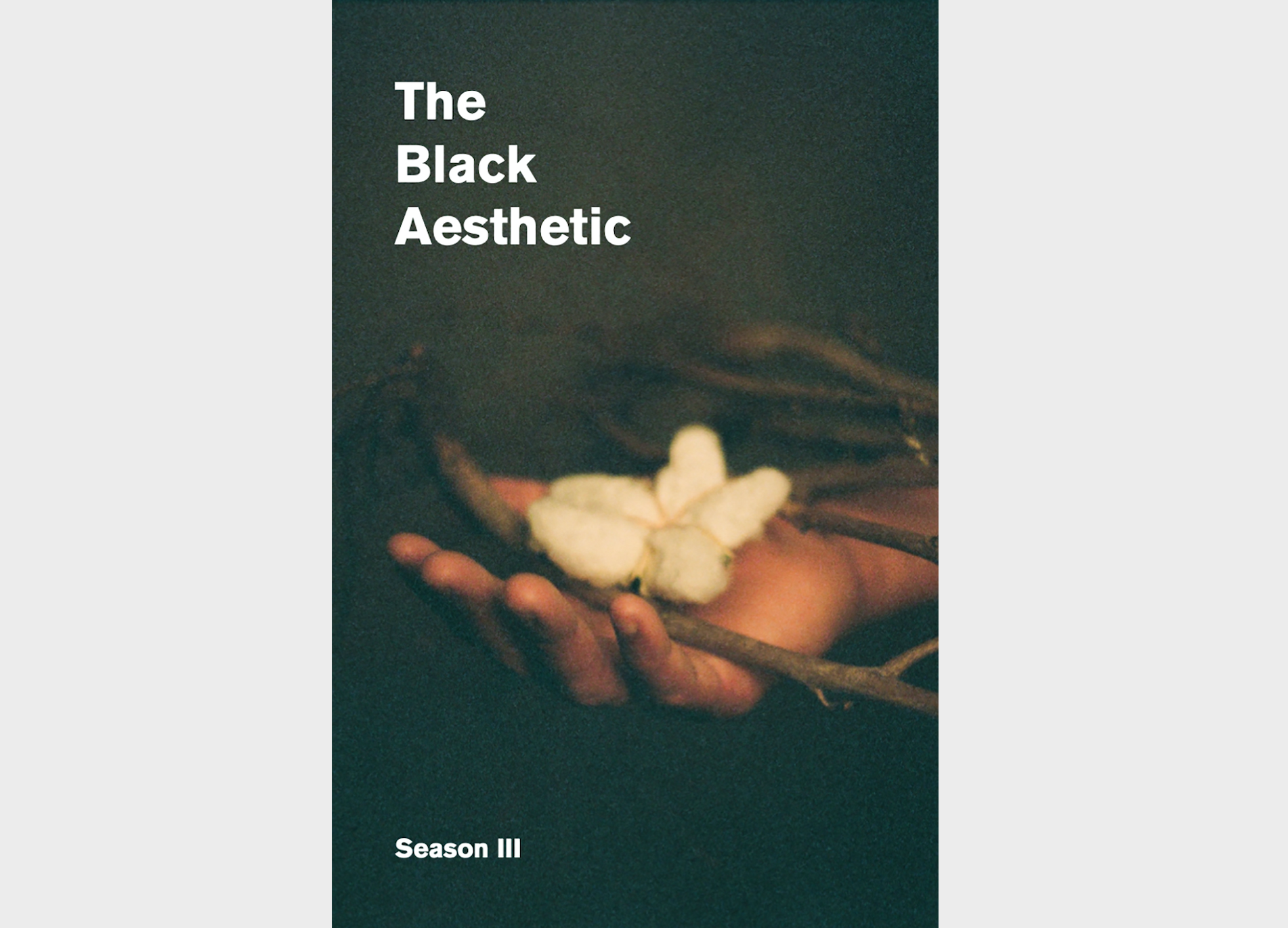 How can a short, single, stable text account for a set of interpersonal, collective, cinematically ephemeral experiences? In mathematics, a fractal is a geometrical figure in which each part has the same statistical character as the whole. The Black Aesthetic, Season III: Black Interiors is a fractal, an evocative fragment of evidence that is reflective of a larger whole that cannot be entirely captured. With this third and final publication–the last iteration of the evolving Oakland-based film collective The Black Aesthetic–Ra Malika Imhotep, Jamal Batts, and Leila Weefur tie up loose ends. The fractal also speaks to the fact that the evocative fragment is yet its own entity, in this case a capsule of minor history. In their own words, the collective works to “showcase rare, independent, or unknown films” with the objective “to create a robust forum to exchange ideas, make connections, and experience the communal aspects of film.” The book is a caring and critical meditation by the collective’s members on what their work has been and what it could lead to. TBA’s final offerings of self-documentation–where the self is both the individual members of the collective and the group as a self–are woven together with a rich and varied set of writings on Black visual objects.

nan collymore, multi-disciplinary artist and theorist of haptics and materials amongst other hats, was the book’s editor and provides the introduction. Grounded in Baltimore, the framing offers a geographic thread which spatially opens up the Oakland specificity of TBA. It’s also a reminder of the always wider scope of what collymore introduces as “Black Lives. Black Aesthetics. Black Troubles. Black Stillness. Black Joy. Black Study. Black Silence. Black Movement. Black Matter. Black Sounds. Black Woes. Black Noise. Black-ography”(9). Structurally, the book is a sequence of alternating cross-medium documentation of films and memories through essays, poems and photographs. The Black Aesthetic, Season III succeeds as a compendium of different voices that enmesh and interweave, many-and-one, animating different forms towards exploratory ends.

“Black Interiors” was the collective’s fourth and final film program of screenings, which ran in Spring 2020 at the Berkeley Art Museum and Pacific Film Archive. The sections dedicated to the series itself capture a sliver or a shadow of the gatherings through stills and extended iterations of the introductions which preceded each of the three parts of the series: Sweat, Spirit and Intimacy. The films shown were drawn from the Pacific Film Archive, and their documentation here makes this book another piece in the prismatic, multiform work of Black archiving. In their written portion, Leila Weefur’s meditation on the half-visibility of the cinema space (43) speaks to a larger point about what the book can and cannot capture of the collective’s work, which was ultimately about gathering people together, a kind of communion. The community and fellowship in a dark cinema, in dark places, the necessary opacity and covert legibility of Black art practices are evoked throughout.

Slim as it is, this book carries the reader through film screenings and museums visits. Scholar Leigh Raiford, who appears in a visual rendering of the collaborative Bay Area initiative “See Black Women” to address “visibility, grief, and our present paradigm shift in culture and practice,” stages a museum encounter with Kerry James Marshall’s Woman With Death on Her Mind (1990) as its centrifugal force. Five pages cover twenty years and yet feel startlingly complete, ending, as many of the pieces in the book, with a call towards the past’s necessary place in the future: “In dark times now is the moment to carry the spirits with purpose.” An earlier piece by Raiford haunts this one and also joins the book’s chorus. In the essay, “Photography and the Practices of Critical Black Memory,” Raiford negotiates the historical implications and documentary use of photography and offers the term critical black memory as a name for “an ongoing, engaged practice through which a range of participants speak back to history and assess ongoing crises faced by black subjects” (114-115). This too could be a name for the work of TBA and that of Black artist interlocutors within the text.

The following textual section of the book is similarly engaged, focusing on participatory and intergenerational practices of documentary and memory-making. “Creating Art in the Collective” is a dialogue between Ricky Weaver and Michelle May-Curry, two recipients of the 2018-2019 Detroit-based Carr Center Independent Scholar Fellowship, mentored by Carrie Mae Weems. The conversation narrates both the richness of this other Black art collective’s work and an intimate intergenerational exchange. Weems, whose multi-media visual works interrupt dominant received histories by acting as luminous witnesses of past atrocities and by insisting on the multiplicity of Black women, appears as a guide to the projects of younger artists. In Weaver’s lovely intervention she writes: “Freedom is a practice, we must always be on the move. I like to think of artists as conductors and ushers to the next where and when” (97). The book as a whole echoes this insistence on the possibility of an elsewhere, a place not yet reached but imagined in the processes of Black culture production.

Michael Gillespie writes about Ja’Tovia Gary’s An Ecstatic Experience (2015), a short film which mines the ancestral/astral. Gary’s visual piece is a stunning quilt of archival footage, scratched film and present absence. Gillespie is attentive in particular to the hand of the artist– “A / black woman’s hand” are the essay’s closing words–retelling and reading the film, which is itself punctuated by images of Gary’s hand handling the celluloid. Gary’s hand in the matter is at stake, as it represents her agency and orchestration of this film of worship and revolution. The essay provides a careful catalogue of the bursts of Black women’s history and creativity in Gary’s film: Kathleen Collins’s Losing Ground, Alice Coltrane’s “Journey to Satchinanda,” Fannie Moore’s words, Ruby Dee on a stage and Assata Shakur in Cuba. Gillespie’s essay offers a wealth of shorthands which gesture towards the constellation of the larger book as a work of proximities and touch, “Haptic texturing. Scalar intimacy,” as well as the map provided by those who came before in the fights for something like freedom: “Dead reckoning? Liberation Cartography” (108). With deft ekphrasis, the piece is grounded in the “Sweat, Spirit and Intimacy” of Gary’s film.

With a return to her opening voice, nan collymoore furnishes the closing critical piece, on the stylings of Grace Wales Bonner, “an incomparable architect in the world of fashion” (113). collymore uses the terminology of “Black gestural subjectivity”(113) in a sharp reflection on the speaking materiality of Bonner’s designs, themselves repositories of multiple histories of Blackness, levelled against reductive ideation of what “men’s fashion is” and who it is for. collymore elegantly gathers descriptions of the clothes, their iconographic lineage in fashion and persuasively reads how they interface with considerations of the disruption of dressing the (post) colonized self. Her description of how Bonner’s garments “folding the message into the seam” (117) is an apt image for all the rich connections half-hidden throughout the book.

There are poems scattered across this collection, by Arisa White and Renee Royale, conceptually bound by their invitations to consider possibilities of temporal cartographies of imagination. White meanders on freedom, with a composite freedom figure, Harriet Isabella Truth—a conjuring of Sojourner Truth, who was born Isabella, and her fellow in mapping and creating routes of covert escape, Harriet Tubman. The pieces are staccato, agitated and electrifying, summoning ancestors towards a present opening where “notes from our a cappella bodies / constellate our outer spaces” (65). Royale’s poem is accompanied by a blurry polaroid, which is to say a polaroid that feels in motion and here again we hear a song of survival and creation (122).

The Black Aesthetic, Season III: The Black Interiors functions as an archiving of the collective experience. This book-as-archive is also an affective record of the physical gatherings and events organized by the collective. It has an affective richness that shades and illuminates the work, the historiography of this group as a set of morphing social formations. The book reactivates those spaces ephemeral events, gives them a lasting imprint and a hope for more life. In the middle of the book is a section entitled “Photography from Season III,” credited to Sasha Kelley, capturing rapt audience and enthused speakers, a third party to a group selfie, milling around and pausing to still a moment of joy. What this section signals is the vibrant social, collective life of TBA’s event. From snippets providing in writing by Imhotep, Batts and Weefur, there is a sense that these active circuits created what José Muñoz defined as “possibility of counterpublics—communities and relational chains of resistance that contest the dominant public sphere” (Munoz 146). With Wolfman Books press, amongst others, as facilitators of space and support, the collective generated life for a Black film culture. Jamal Batts describes it as “a space where, maybe, many traversed multiple forms of alienation, mediated by screens, we were able to create something akin to community” (99).

Ultimately, this text is something of an elegy. Each of the members provides a section titled “Statement Towards a Conclusion.” Together they speak towards the vibrant life of their evolving collective project with clarity and an eye of critical care. This book is exemplary of interior documentation and interior witnessing. Ra Malika Imhotep speaks directly to the live circuits of the collective’s counterpublic, closing with a hope that we “can hold on to that aliveness and our ability to create that, to be that, for one another”(53). All three are firm on speaking to the un-prettiness of some of this work, showing that the dream of collectivity is not immune to individualism and material pressures. Lucid and balanced, the closing statements, especially poignantly in Jamal Batts’s contribution, are yet a call towards young Black people who seek to create similar avenues of shared Black possibility.

Space-making practices have always been crucial to all forms of Black life, and here displayed is one grounded in cinema, in a medium of disruptive proximities and impossible but always hovering touch. Weefur notes “how matter can affect and permanently alter other surrounding matter as a result of proximity” (128) It matters that the group(ings) gathered in place and that this is a book which intentionally exceeds it, gestures towards an outside. With the many urgent calls towards the future, the book as a whole evokes the end of Fred Moten and Stefano Harney’s oft-cited Undercommons: “Hapticality, the touch of the undercommons, the interiority of sentiment, the feel that what is to come is here. Hapticality, the capacity to feel through others, for others to feel through you, for you to feel them feeling you, this feel of the shipped is not regulated, at least not successfully, by a state, a religion, a people, an empire, a piece of land, a totem.” Leila Weefer’s contribution, which closes the book, opens outwards, towards the continuing thread of their work, parsing their name anew as “forever in a state of TBA, to be announced, to be assessed, to be actualized” (129). The book is an open container for the polyphonic possibilities of these Black aesthetics.

Yasmina Price is a writer and researcher, currently a PhD student in the Departments of African American Studies and Film & Media Studies at Yale University. She works with anti-colonial African cinema and the subversive, politically charged production of filmmakers across the Black diaspora, with a particular interest in the experimental visual practices of women filmmakers.