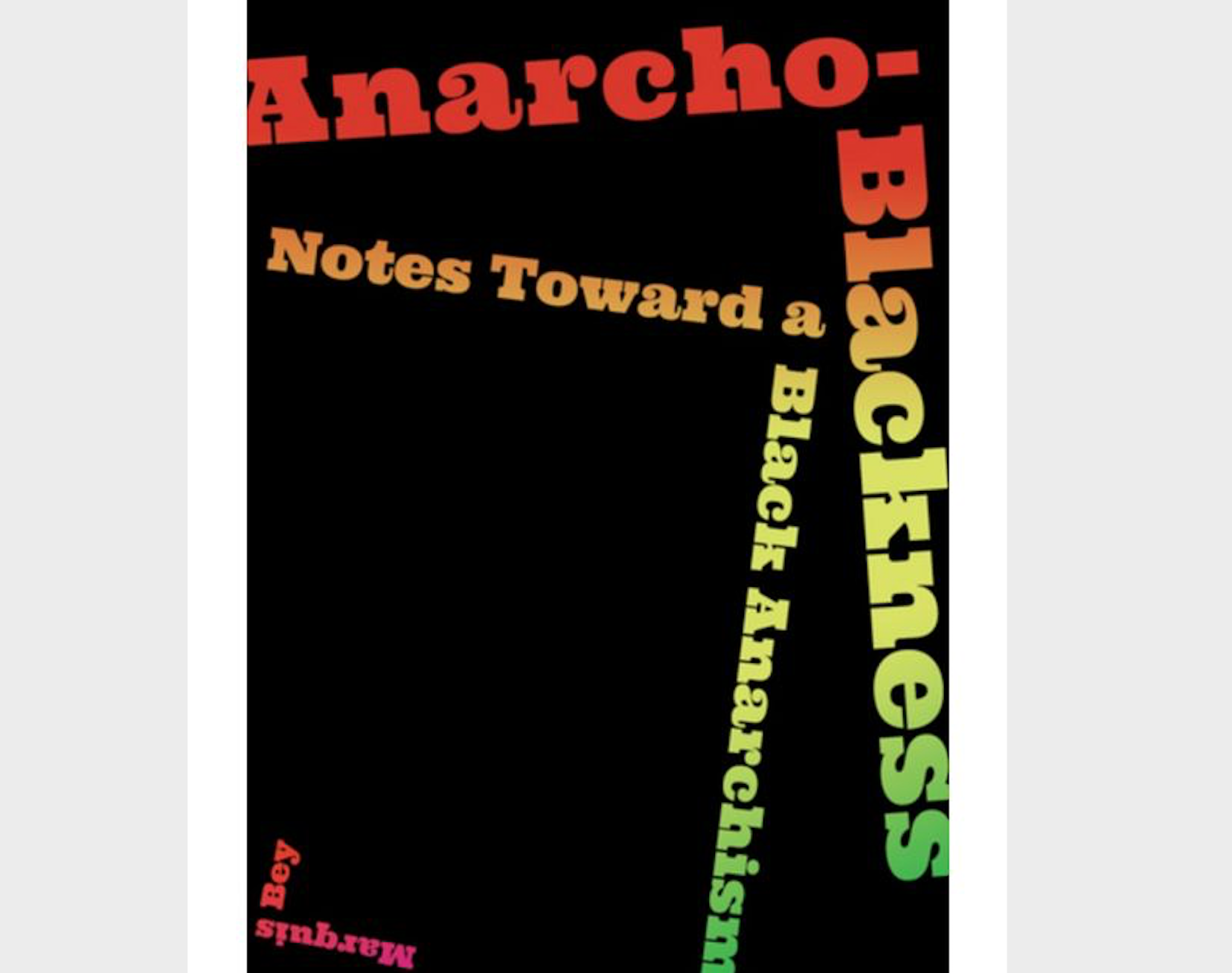 Marquis Bey’s Anarcho-Blackness: Notes Toward a Black Anarchism (AK Press, 2020) is (a) concise, necessarily unsettling, Black anarchist work. Here, the propinquity between “Black” and “anarchist” may confuse the reader, as the Black radical tradition and anarchist politics are not typically understood as bedfellows. Bey, however, is not interested in reconciling this distance; instead, Anarcho-Blackness shows how Blackness and anarchism are chemically entwined as world-making projects that critique any and all oppressive structures. “Neither anarchism nor Blackness can be what it once was…after colliding in a critical, generative intimacy with one another” (5). This book meditates in the aftershock of that collision; it offers Black trans feminist contour to anarchism and specific attention to the anarchic resonances of Blackness, propelled by Hannibal Abdul Shakur’s provocation that “anarchism, like anything else, finds a radical new meaning when it meets blackness” (4). Put differently, Blackness “anarchize[s] anarchism” (16). Specifically, Bey argues for a Black anarchism that is constituted through Black feminism: “anarchism that is not Black feminist is not doing anarchic work” (55). Anarcho-Blackness is an affective challenge as it compels the reader to imagine the “impossible”: “the name for the world outside of, or after, or differently within, an anarchic destruction of the racial and sexual capitalist State. This world-outside is Black, or lawless; this world-outside is anarchic, or stateless, radically liberated” (9).

Chapter Two formally introduces the reader to classical anarchist theory by way of a critique of that literary body: “[Classical anarchists] didn’t really talk about Blackness, were not really concerned with Blackness, didn’t bring Blackness to bear on their thinking, and didn’t think that Blackness’s specificity demanded attention…[Classical] anarchists didn’t really think about the specificities of gender, let alone how gender circulates necessarily within capitalist and white supremacist formations” (13). This genre of criticism is short-lived, however, as Bey rejects “the expected rhetorical move that implicitly garners one a kind of validity: that of pointing out racial and gendered elisions as the totality of one’s argument” (14). Rather, the shortcomings of classical anarchism foreground an opportunity for Bey to remix—that is, anarchize—anarchism with Black feminist analysis. For example, moving from a critique of anarchists’ serial allusions to enslavement in analyses of the State that avoid the ontics of Blackness, to an assessment of anarchists’ inability to theorize the effects of racialized and gendered violence in the afterlife of slavery, Bey interrogates anarchism in Black feminist style by thinking about the State as a relation that organizes racialized and gendered subjectivity and manages the logics of intelligibility with which we encounter one another. The State, therefore, textures subjectivity and intersubjectivity. To disrupt the normativities—the interdictions—of the racialized, gendered regimes of State and capital, regimes that are normative precisely because they sustain difference through notions of separability, anarcho-Blackness conceptualizes Blackness as “tied to a politicality and radical penchant for sociality and social arrangement…open to whoever is committed to expressing the liberatory politics it calls for” (22). Such an arrangement—an anarcho-Black arrangement—is nuclear fission for the State and capital, as it rejects the ground on which normative subjectivity most fundamentally rests.

The radical openness that characterizes anarcho-Blackness is the overarching theme for the remainder of the book. In Chapter Three, Bey insists that “radical openness” must be anarcho-Blackness’s critical praxis as well as its ethical demand, especially insofar as the Black Radical Tradition, Black feminism, and trans activism constitute anarcho-Blackness’s sociality and its horizons of possibility. Anarcho-Blackness, in so many words, must be “monstrously inclusive” (30). Here, Bey takes critical, generative cue from Moten and Harney, who “insist that our radical politics, our anarchic world-building must be ‘unconditional—the door swings open for refuge even though it may let in police agents and destruction.’…[T]he only ethical call that could bring about the radical revolutionary overturning we seek is one that does not discriminate or develop criteria for inclusion and, consequently, exclusion” (30). Blackness, therefore, radicalizes the logics of inclusion to include anyone, not just those who satisfy any particular phenotypic/epidermal criteria or who walk beyond any institutional “gates.” Blackness, then, is a mood or a style or a way of being in the world that indexes not impositions or normativities or hegemonies, but expansive conceptions of freedom, coalition, being, and belonging—conceptions sustained against the differentiated, individuated hegemonies of cisnormative, white supremacist, neoliberal capitalism. Anarcho-Blackness engenders this conception of Blackness to overhaul anarchist thought to rhizomatic effect; Black anarchism, then, becomes capable of theorizing State-sanctioned violence beyond the violent specter of an anarchism constituted through white cissexist heteropatriarchy. To resist the violences of normativity, but also the violences that various critical formations may impose, is to be “ungovernable”; it is the work of undercommon anarcho-Black sociality.

The remaining sections of the book turn to the (inextricable) relationship between anarcho-Blackness and abolition, specifically, in chapter four, the abolition of property. Bey begins this chapter by illustrating classical anarchist critiques of property and their maligned deployments of race and gender that affirm property by occluding whiteness and heteropatriarchy. Anarcho-Blackness defies the logic of property and shows that abolitionism must entail the specific abolition of property, producing, instead, an unregulated, unpropertied, mutually-aiding sociality as its (non)order. To work with and toward an anarchic vision that is also Black feminist, Bey implicates subjectivity as the site at which the abolition of property, an anarchic proposition indeed, begins: “Property has at its base the thorough holding on and possessive spirit of its owner, an encompass­ing knowingness of the property possessed” (44). To reconstitute how the subject relates to property, anarcho-Blackness proposes what J. Kameron Carter and Sarah Jane Cervenak call “‘parapossession’ as [its] relationship to property” (47). It is a relationality between people and between people and things that is not premised on the ravages of colonial expropriation or the grammars of enslavement.

Recall, as anarcho-Blackness is “always already queer, always already Black feminist, and, most fundamentally, al­ways and already trans and nonnormative” (11), it is also articulated through a robust socialism, a la Combahee River Collective (CRC) Statement. “The CRC’s notion of interlocking oppressions understands that all the systems and discourses that contain and curtail us—what anarchists would loosely understand as the State and authority—are connected” (52). Bey’s insurrectionary, anarchic thought provides the thrust for this chapter: “What strikes me about the CRC is how their socialism, which critiques socialism, expands socialism, moves by way of anarchic principles and forces” (53). Even though the CRC did not avow themselves anarchists, but socialists, we still glean how they mobilize Black feminist subjectivity—which produces an analysis of “interlocking oppressions” of “racial, sexual, heterosexual, and class oppression”—with anarchic effect. It’s important to note that Bey is not interested in those who simply “claim” themselves anarchists, but rather in those who do anarchic work, regardless of their particular stated affiliations. Moreover, the CRC believe that a liberatory movement rooted in Black feminist subjectivity would produce a society in which there are no hierarchies, but in which everyone is “recognized as human, levelly human” (53). Anarcho-Blackness, as shaped by Black feminism, is not, then, solely a critique of political economy centered in Black women’s subjectivity. Though it certainly is this, it is also a social and ethical formation of “anticaptivity” (26), as Jennifer Nash puts it, disinterested in (re)producing any oppressive structures or relations. Anarcho-Blackness might be, to purloin Manolo Callahan, a way to “walk more lightly on the earth.”

The book’s final two chapters discuss the production of a sociality that sustains and celebrates Black, trans, and gender nonnormative life. They also engage the metaphysics of abolition. To follow Bey’s argument requires you to recognize the commingling between abolition and anarchism and their mutual connections to Black, feminist, and queer forms of life. As such, Bey notes, “abolitionism is a visionary and political praxis and modality that struggles against the regimes of capitalism, white supremacy, heteronormative patriarchy, and cissexism” (95). Abolition moves with the goal of “eradicating rather than reforming systems, discourses, and institutions that structure life and livability” (93). For abolitionists, there is a break in the distinction between theory and practice. Whereas some contest that theory and practice “need to be in conversation,” abolitionists cannot think of theory and practice as discrete formations. Abolitionists reject the “false assumption that ‘one could separate the articulation of ideas that would govern how we envision the future from actually enacting that future’” (92). Abolition is a vision of the future that precipitates from how we live now.

I will close by highlighting two things that Anarcho-Blackness does to help the reader further their understanding of Black anarchism and abolition. First, it deconstructs normative arguments against abolition without attending to their specific malignments. Judging from the tenor of the book, Bey is likely unconcerned with what normative actors think of anarcho-Blackness as a political formulation. Indeed, no one is holding their breath for the cops to say, “You know what? I see your point, Dr. Bey.” Second, Bey constructs every thought with bibliographic reflection. A reader of the Black radical tradition will notice the influence of Moten, Spillers, Chandler, da Silva, and many others. In addition to the various anarchists that Bey discusses, we are also presented with the ideas of anarchists whose names we do not know, the ones who we’ve never heard of, who do monstrous anarchic work every day. What one takes away from Anarcho-Blackness is the not importance of labels and titles, but of “doing anarchic work” (12).

Andrew Cutrone is a PhD student in sociology at The University of Texas at Austin. His interests are in Black studies, Black feminism, critical theory, and pedagogy. He writes about the aesthetic dimensions of power relations, the theoretical relationship between critical whiteness studies and Black studies, and stand-up comedy in the public sphere.