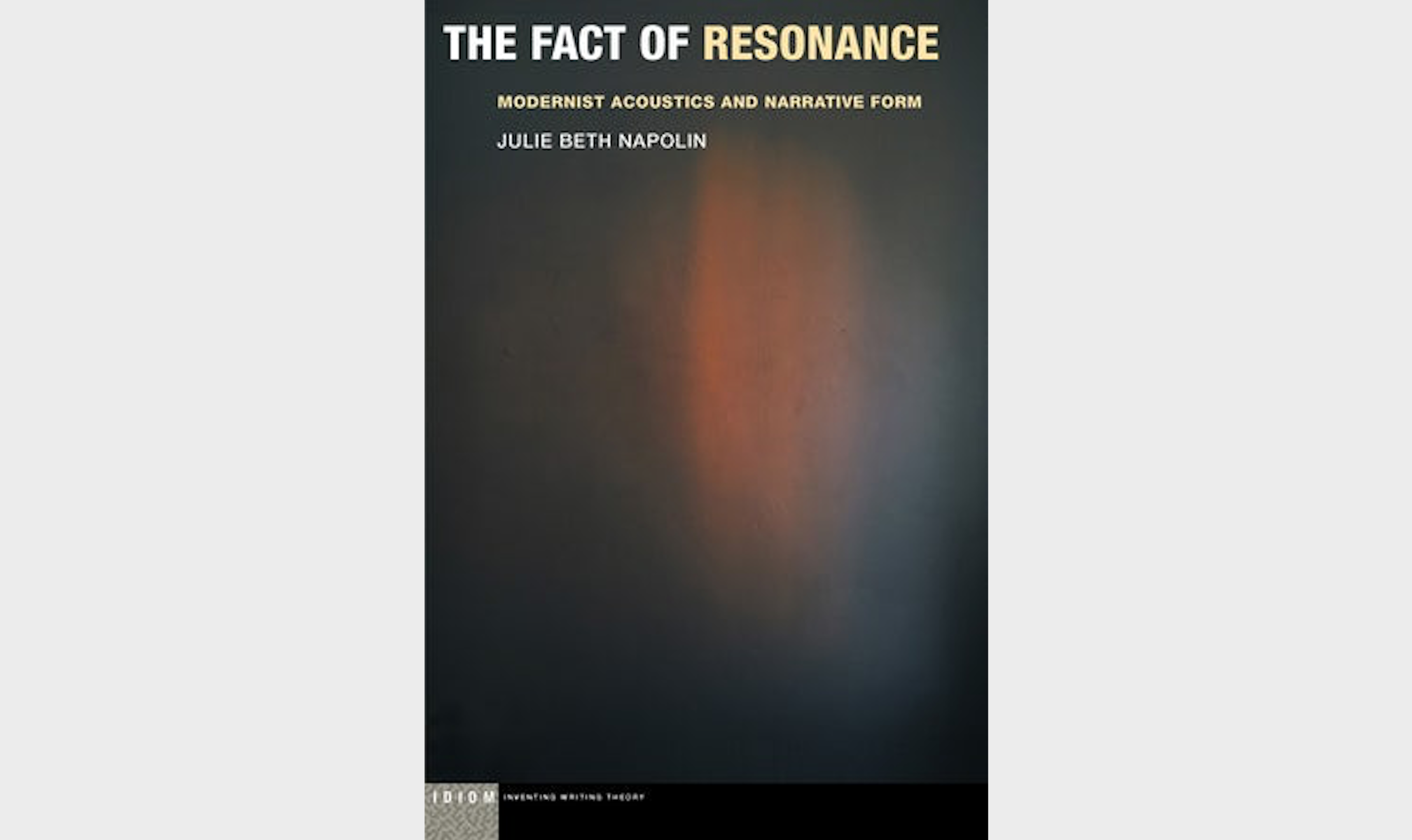 In a moment when the voices of the oppressed are ringing out across the world, Julie Beth Napolin’s The Fact of Resonance brings us toward the literary beginnings of modernism so that we can learn to listen for difference, which was never, contrary to some Fascist desires, completely contained. The central archives that Napolin’s book mines are the works of Joseph Conrad, William Faulkner, W.E.B. Du Bois, and Frantz Fanon. But this is an inquiry whose concern with the residue of modernism is more interested in questions of onto-epistemology than in biography or history. In this, Napolin proffers resonance as both analytic and object.

Resonance, she argues, offers audible traces of “what the consolidated vision of literary study cannot synthesize” as well as “linguistic traces of the unsynthesized colonial and postcolonial “ (5). Working with resonance as method, then, offers a way to read beyond the words on the page. It asks readers to listen, a process that asks the reader to locate and stay with the sonic dimensions of a passage. This listening is not about unpeeling another layer of signification so that the passage gains more clarity, but about the affective charge of the reader. What is at stake is how these sounds change the tone of the entire novel. In this explanation, we can already see that thinking with resonance invites us to consider reading phenomenologically, as something explicitly engaged with in time and orientation. As Napolin writes, “Resonance is defined by relating and spatio-temporal delay” (5). These dueling aspects of relation and space/time further increasing the methodological ways of working with resonance. Temporal distortions and spatial movements can be found in numerous distinct sonic formations—Napolin employs echo, reverberation, and vibration, for example, amplifying the possible fusions of sound studies and literary studies.

This spatio-temporal dimension, however, also has implications for thinking about resonance as object, particularly because the sounds that we are being trained to listen for as those produced in relation to colonial and postcolonial subjects. At this moment, the question of the book is not only how do we listen, which is a question that can be linked to ethics, but what are we listening to? A question that reframes minoritarian representation away from that which is imagined to be grasped, especially in the personae of black and brown people, but toward grappling with the fundamental unknowability of those people for those whose primary mode of relation has been through possession and conquest. As “object,” resonance offers a set of representations that shimmer, but do not settle. An onto-epistemology of racialization that profoundly differs from that which we have been trained to encounter. What does it feel like to be an echo? What does one do in the face of a sinister vibration?

Here, some examples. The first chapter offers an analysis of Conrad’s choice to begin Almayer’s Folly with the Malay cries of Mrs. Almayer; in addition to announcing the colonial setting, her voice represents racialized, femininized difference. As Napolin writes, “With the opening shout, Conrad draws our attention to how, in the Western philosophical tradition, the audible is physicalized in space and feminized as a border” (39). The reader, however, is never quite let into that world—something that becomes very clear when Napolin turns toward Chantal Ackerman’s adaptation of the novel and focuses on the disjunction between movement and voice in the extended lip-synching sequences. Voice, often imagined to be the more straightforward approach to asserting the self, becomes changed in its twinning with illegibility. It shows what difference can never be fully known.

“Echo of Object: On the pain of self-hearing in The Nigger of ‘Narcissus’ and the ‘Fact of Blackness’” pairs Conrad with Fanon in order to explore the echo and what it is to have the self be projected onto from a distance (and a difference). Early in the chapter, Napolin summarizes, “Echolocution will allow us to understand how Fanon, also writing of scenes of racialization in a painful aural event in ‘The Fact of Blackness,” reverses the Freudian schema to find in consciousness a particular politically and historically structured event of traumatic, auditory instantiation” (73). What Napolin describes as a reversal is a fascinating rereading of Fanon and a reparative version of the racialized mirror scene. This is largely because Fanon writes phenomenologically, so that we feel the stakes of inhabiting the “echo” as a racialized onto-epistemology. While many may be familiar with Fanon’s meditations on what it is to be a black object, considering this structure sonically opens us toward thinking specifically about the auditory markers of place and “belonging.”

The intertext grapples with W.E.B. Du Bois, writing about the same time as Conrad, and his recording of black voices; Napolin argues that Du Bois was able to listen in a way that Faulkner could not, largely because of the childhood songs that he continued to hear. They allowed him to grapple with the “unconsolidated voice. It is caught up in the Middle Passage, in the passage of literature, and music, in quotations, fragments, and their resonant lacunae. Lyrical, it is nonetheless unmoored from the foundational rhetorical premise of lyric: that it will reach an addressee” (116). The final chapter returns to Conrad and his strategies of representing difference to dwell on Xanthippe’s presence in Heart of Darkness: “not a[s] lost object but an ignored object adjacent to the master scene.” This parallel structure defines that Napolin described as “sinister resonance,” in this case an adjacent vibration that informs the narrative of the evils of colonialism. This half of the book giving insight into sonic structures that might reveal what colonialism wants to ignore.

Throughout The Fact of Resonance, Napolin weaves together critical theory, literary theory, sound studies, and psychoanalysis to make an argument for why this mode of reading gives us rationale for returning to the novel and these modernist texts, in particular. One might also, I think, pause to think about modernism as an even broader structure that also links these particular critical formations. This is to say, how do we work with the tension that a modernist worldview gives us when it fractures BIPOC subjects and prioritizes consciousness? Napolin does not dwell on this particular aspect, but I do wonder how to make sense of these clashing onto-epistemologies. On the one hand, there is promise vis-à-vis the opacity that resonance offers as onto-epistemology vis-à-vis minoritarian representation. Additionally, in focusing on listening, it is the reader’s subjectivity that is queried and worked through, further diffusing mandates around BIPOC representation. On the other hand, given historical exclusions (and current outcries), what is the relationship between representation and vocalizing; Gayatri Chakravorty Spivak’s question “Can the subaltern speak?” remains.