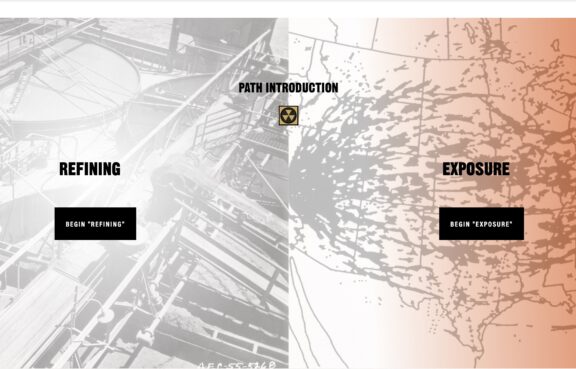 The digital public humanities project A People’s Atlas of Nuclear Colorado, comprising scholarly essays, artistic contributions, and much more, maps the many ways the nuclear arsenal has shaped the state of Colorado. It is the first installment in an even more ambitious A People’s Atlas of the Nuclear United States. Remaining loyal to situated approaches, it focuses on local geographies without losing sight of the national nuclear apparatus. It was released in late 2021, and given the recent global developments—from nuclear energy’s greenwashing in Europe to atomic threats deployed afresh in the war in Ukraine—it reads eerily, like a harbinger.

Atlases are generally composed of layers of several maps and catalog various features of the land. But this is no ordinary atlas. It stubbornly resists the possibility of all-knowing—an ultimately impossible un-situated view from nowhere—to bring nearer the toxic lands of Colorado, thus exemplifying a broader turn in cultural scholarship that favors experimental forms of research at the crossroads of public engagement and the humanities, frequently taking digital form. (Another wonderful example is the contemporaneous Feral Atlas: The More-Than-Human Anthropocene.) Weaving together neutral(ish) types of policy verbiage with narratives of a more personal nature, A People’s Atlas of Nuclear Colorado is an agile example of what a work of critical digital humanities can do, bringing about a multifocal and multivocal understanding of the matter at hand. Its approach is multi on many planes, really, since it is the work of many people, first and foremost interdisciplinary artist and critical writer Sarah Kanouse and geographer Shiloh R. Krupar.

The two are certainly not strangers, either to each other or to nuclear issues. Krupar is the author of the influential Hot Spotters Report: Military Fables of Toxic Waste (2013), and Kanouse’s creative work and writings regularly engage the toxic and uneven legacies of the Cold War. Their first piece of experimental joint scholarship was the National Toxic Land/Labor Conservation Service, founded in 2011. The National TLC Service, frequently apt to play on beloved acronyms of nuclear jargon, was a “wishful” government “agency” specializing in site visits and design charrettes at locations around the United States where legacies of weapons of mass destruction still loom large. The founders created a logo and uniforms, and were wont to draw up fake legislation and act out performative lectures. In short, the National TLC Service insisted on simulating fiction as fact—aka parafiction—aspiring toward a moment when fiction challenges the reality it seeks to describe. But after the 2016 US presidential election, Kanouse and Krupar acknowledged that fictional narratives risk propagating fake truths and turned their mutual gaze toward more practical tools of research.

Under the Trump administration, environmental deregulation and the purging of adjacent data made the need for a certain “realism” (for lack of a better word) critically important. A People’s Atlas of Nuclear Colorado thus opts for a less ambiguous but still powerful approach. It compiles different levels of information on nuclear activities, much of which I would call taciturn information, meaning information muted or suppressed into tactical silences. Nuclear knowledge is tightly guarded, for obvious reasons, especially when it comes to its military applications, which tangles matters when it comes to humanistic and historical inquiries. In fact, state-owned secrets and nuclear weapons are historically interwoven, as Peter Galison notes: “The modern secrecy system has its substantive start . . . in the vast infrastructure of World War II. In part this new secrecy issued from the government, and yet in no small measure it emerged in the hands of scientists themselves as they launched a discipline of self-censorship on matters relating to the nucleus.” If nuclear knowledge was born in the utmost secrecy, it matters to a proportional degree how this same knowledge is communicated, structured, and categorized.

Seen through that lens, A People’s Atlas of Nuclear Colorado is an epistemological project that carefully curates knowledge about an extensive subject in a geography that has been home to all the stages of the nuclear fuel cycle. From uranium mining to ore refining, weapons production, nuclear testing, and radioactive wasting, Colorado has seen it all. And indeed, the successive stages of the nuclear fuel cycle provide the conceptual framework and backbone of the platform. Beginning from the table of contents, the visitor can concoct their own path into the atlas. Each stage/chapter in the TOC refers to a process—refining, waste, production, and so on—complemented by a second term that highlights the darker, or “shadow” side of nuclear operations—overburden, exposure, legacies. This darker side, we are warned in the introduction, should not be seen as collateral damage but as part and parcel of any nuclear operation: “Where there is mining and milling, there is overburden and exposure; where there is production, there is friction.”

The many different paths of the atlas are always crossing and converging, yielding unexpected epistemological encounters. Kanouse and Krupar collaborated with scholars, students, artists, activists, and even family members (both have either roots in or at least deep connections to the state of Colorado) to ensure a multiplicity of points of view. Familiar names from the field of nuclear humanities, like Valerie Kuletz and Kevin Hamilton, abut the voices of students and Colorado residents. But it is, ultimately, a people’s atlas and not the people’s atlas, clearly indicating that its contents are but one possible interpretation of Colorado’s nuclear geographies.

Visitors may initially think they are delving into a more typical reading experience given the terminology of the structure (for instance “table of contents”), but will soon find that this navigational experience is nothing like reading a book. The atlas grants users a kind of agency that allows for a highly flexible encounter that is neither strictly spatial nor thematic. Navigating the atlas can be a processual experience following the various stages of the nuclear fuel cycle, or the user can hopscotch between seemingly unrelated nuclear narratives, images, maps, and texts, thereby staying true metaphorically to nuclear history’s inherent complexity and resistance to strict categorization. After an informative entry on Allen Ginsberg’s poem “Plutonian Ode” (1978) and the ways his oeuvre fed into his creative antinuclear activism against the Rocky Flats Plant, I found myself browsing through the history of the FBI raid at the same plant in 1989, which revealed chronic violations of environmental laws and led to its shutting down. A few more clicks in, and I was learning about the infamous “glove boxes,” sealed containers with two gloves spookily hanging, allegedly creating safe labor conditions but not actually protecting workers from contact with plutonium. Such layered scales of analysis, shifting between irradiated working bodies, policy papers, and antinuclear art and activism, are highly engaging.

The reading spree just recounted is unlike a Wikipedia skimming marathon, which (speaking for myself, at least) usually ends up down a rabbit hole where I am unable to trace back to my initial prompt. This effortless sense of orientation achieved by the atlas is certainly facilitated by the reasonable length of the textual content—the lengthier texts are only around 2,500 words. Dry academic parlance is avoided, and the intelligible conceptual vocabulary of the TOC makes it an easily navigable tool for specialized researchers and curious minds alike. Hyperlinks in the essays facilitate research beyond the atlas’s terrain, and the texts are richly illustrated with well-researched archival imagery.

Occasionally, due to a search functionality that could stand to be more robust, it wasn’t so easy to trace my route back to an entry previously read. Such issues, however, are by no means detrimental to the overall experience and potentially allow for surprising discoveries. Additional helpful tools to mitigate the feeling of being overwhelmed by the richness of the sources and voices are the little pictograms appearing next to the title of each contribution. Evoking the atomic visual lexicon, the atlas deftly connects subject and form; for instance little mushroom clouds signal “artwork,” and microscopic globes symbolize the category “Earth/Whose Earth.” The terminology is simple, and each contribution might have from one to six pictograms, linking processes and effects under a shared theme.

Yet this conglomeration of interconnections does not lead to lofty assertions that everything is connected to everything in nuclear histories. By rejecting the idea of mapping as a simplification of information, the atlas fully embraces the complexity of nuclear pasts, presents, and futures. This is in line with recent work in the nuclear humanities adopting a Latourian approach to science studies that is intended to be global and transnational. It is indebted in particular to Gabrielle Hecht’s work on the instability of nuclear ontologies—there isn’t one nuclear ontology, Hecht cautions, but many, and they implicitly resist settled classificatory schemes.

Although geographically bounded in Colorado, the atlas shows the state’s crucial role in the US and global nuclear complex, for example as one of the primary national sources of uranium and other raw materials thanks to its Uravan Mineral Belt, or as the manufacturer of the fissile core of nuclear warheads, known as “pit,” at Rocky Flats neat Denver. Rocky Flats flirted with a large-scale atomic catastrophe after a severe fire broke out on Mother’s Day 1969, and the artist Amy O’Brien depicts it in her 2018 installation I’ll Cry Tomorrow. Made out of contaminated debris that might have originated from the plant, chaotically piled up, the work mediates a vision of atomic violence from within the belly of the nuclear beast.

This view from within is perhaps the biggest achievement of A People’s Atlas of Nuclear Colorado. The collected materials suggest that it is only by attuning to the specific—be it geographical, chronological, societal, artistic, or several of these at once—that the nuclear complex can begin to be apprehended. The large collective of contributors have brought to life an atlas turned upside down, an atlas that looks up from below, from the irradiated ground. And, importantly, it is an atlas that will never be complete. Considered a living digital document by its creators, it will welcome future entries and collaborations with educational partners and organizations to expand and amplify the work it already hosts. This lack of closure mirrors the lack of resolution of nuclear toxicity itself, as accounted for in multiple entries. The harmful effects of nuclear materials will linger on for hundreds or thousands of years to come, always manifesting too late for compensation and too late for any form of justice. A People’s Atlas of Nuclear Colorado launches a form of investigation, interpretation, and scholarship that is itself ongoing about a subject that is likewise elusively ongoing. I look forward to navigating its continued invigorating approaches to nuclear histories.

Kyveli Mavrokordopoulou works at the intersection of art history and the environmental humanities, specializing in the relationship between art and science with an emphasis on nuclear technologies. She completed a dissertation at the École des Hautes Études en Sciences Sociales (EHESS, Paris) in 2021 as an Onassis Foundation doctoral fellow, and she is currently a postdoctoral fellow at the Käte Hamburger Kolleg, RWTH Aachen University. In her postdoctoral project, Mavrokordopoulou explores uranium as an agent of environmental injustice, proposing a material history of uranium in the twentieth century through art and media. Her writing has been published in Necsus, European Journal of Media Studies, Les cahiers du musée national d’art moderne, and the edited collection Toxic Immanence: Decolonizing Nuclear Futures and Legacies, amongst others. Mavrokordopoulou is the scientific advisor for an upcoming exhibition on the atomic age at the Musée d’Art Moderne de Paris (fall 2024).