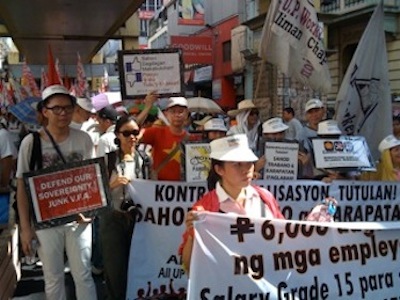 It was and remains a great inspiration to have participated in yesterday’s Labor Day rally in Manila. Along with the electrifying militancy of a large number of leftist organizations including unions, political parties, campus activists, national activists, women’s advocacy groups and many many others, came that welling feeling of solidarity, goodwill, humility and love. There is so much to respect in peoples’ lives and struggles! And so much Power in the mobilizations called forth by the compelling dignity of the seemingly endless fights for justice. Not Power in the simplistic sense, or in the mechanistic, bio-political sense. The mobilization synthesized and indeed materialized a libidinal and moreover an aesthetic experience — a reality of our own making — at once ephemeral and enduring.
Diversity of demands and creativity of approaches were everywhere present. Among the demands: the call for a 125 peso increase in the daily minimum wage ($3 U.S., which was rejected outright by Philippine President Aquino on the same day), the demand to “Junk the Visiting Forces Agreement” (which, even after the elimination of the bases allows US military personnel privileges and exceptions under Philippine law), the demand to “Stop rape and killing of Women / U.S. troops out of the Philippines” (currently countered by the beefing up of U.S. forces over the Scarborough shoals conflict with China over fishing rights and oil reserves), and other injunctions, exhortations, and informative slogans: “Stop killing peasants / who feed the nation,” “Sahod, trabaho, karapatan / ipaglaban” (struggle for salary, work and rights) “Tuta ng kano / kapitalista at hacendero / Noynoy” (Aquino: capitalist, hacendero and America’s dog). All along our march through the streets of Manila were posters, signs, indictments, chants, and songs culminating at Mendiola in music, a huge mural by social realist Orlando Castillo, a whirlwind of red flags, and the burning of an effigy of the president. The symbolic destruction of the existing state was a clear expression of the hope that current hardship, high prices, low wages, meager livings, inequalities, extrajudicial killings of organizers, squatters, peasants, and activists, and the continuing and often intensifying oppressions of colonial feudalism, imperialist capitalism, heteronormative patriarchy under the guise of business as usual could be brought to a halt. The gesture of incinerating the existing state also pointed a way forward. Palpable in the smoke and flames, in the songs and chants, in the raised fists, signs and bodies, was the textured, nuanced and abiding reality of lives, struggles, aspirations and solidarities almost unrepresentable in mainstream media. This is the Power I referred to earlier – a living, communal constellation of complex, intelligent, fair-minded civic interests most days rendered indecipherable and at times inaccessible by mass media’s atomizing officiating of hegemony passed off as reality As if only mobilization and manifestation of struggle were, for the moment at least, really capable of displacing the reactionary capture and expropriation of peoples’ collective will.
The generosity, openness and community of thousands of persons, some few of whom I met that day and some fewer of whom have been my interlocutors, companions, friends and, to my eternal gratitude, teachers for almost two decades already made this day particularly memorable for me. There was the energy of large groups and the intensity of the individual exchanges while marching. The jokes, stories, intimacies, denunciations, tales of atrocities, political strategy discussions, recountings of police and military violence, re-enactments of conversations, remembrances of bathrooms or the lack thereof in the cordilleras, the banter, the sward speak, the rallying cries all serve to remind those of us who might need reminding that not only is another world possible, another world exists!
It is from this world erupting in songs and flames, and the hundreds if not thousands like it that the future must come – that is, if some of us are to have a future at all. Not a day of rest, Labor Day in Manila was a demonstration of the profoundly necessary labor of realizing worlds that live not on the myriad capitalizing screens but in the streets, fields, factories, brains, hearts and imaginations of our actually existing body-politic. It is the making these worlds manifest that should inform our work.
–Jonathan Beller, Manila, May 2, 2012

Jonathan Beller is professor of humanities and media studies and director of the Graduate Program in Media Studies at Pratt Institute. His books include The Cinematic Mode of Production: Attention Economy and the Society of the Spectacle (2006) and Acquiring Eyes: Philippine Visuality, Nationalist Struggle, and the World-Media System (2006).