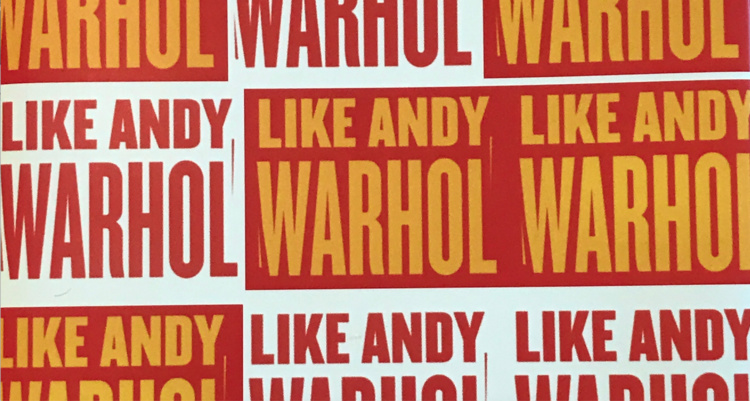 For a long time, similarity was out of fashion. Difference was in and likeness was out; comparisons were odious. To see or assert likeness, the thinking went, was tantamount to denying irrefutable factual differences, often ones related to identity and its historical formations. However, the version of likeness that many were using was absolute equivalence: an economic or computational approach to similarity, where sameness is an all or nothing affair. Because there is always a difference between two things, however minor, it was risky to make a comparative claim. To draw an analogy was to invite a chorus of justifiable objections and but-what-abouts.

As Jonathan Flatley demonstrates in Like Andy Warhol, though, the like is not the same. The book joins recent volumes by Douglas Crimp and Anthony Grudin in what I would call the third wave of Warhol studies. It’s a book about mild affects as opposed to grand passions: affinity, impersonal familiarity, a state of generally being game and open to things. It also proposes liking and seeing likenesses as a potentially redemptive way of being in the world. As Andy once said of fashion, if you wait long enough, the thing you like will come back in style; now, perhaps that thing is likeness itself.

Flatley’s introduction parses the many meanings of “like” that animate the book, drawing from a predictable stable of European theorists: Nancy on the like and the same, Freud on identification, Benjamin on the mimetic faculty, Derrida on prosopopoeia, Kant on Wohlgefallen, Spinoza and Deleuze on the joyous, Heidegger on Stimmung or attunement, and others. Most of these strike me as unnecessary. While in keeping with the book’s and Warhol’s spirit of collectivity and open-endedness–the inclusive, future-oriented “ands” and “ands,” in this case applied to theoretical concepts–the exercise feels somewhat stodgy compared to the livelier chapters that follow.

For example, Chapter Two, “Art Machine,” is about machines and systems in the work of Warhol and Sol LeWitt. When Warhol says he wants to be “like a machine,” or that he is married to his tape recorder, or that he wants everybody to be alike, he is usually interpreted as either endorsing or satirizing industrial modernity. Warhol’s canvases, films, and superstars were indeed produced en masse, but with something like the opposite of Taylorist precision. Warhol was like a machine, Flatley suggests, not because he was the prince of detachment and calculated exploitation, but rather because his attention was so all-inclusive, so indiscriminate. The kind of machine Warhol wanted to be like was a tape recorder with an omni-directional microphone calibrated to all registers, rich and poor, black and white, silver, Mao red to ultraviolet, and everything in between.

LeWitt and Donald Judd are somewhat surprising bedfellows for Warhol; their inclusion thus demonstrates the book’s own premise of unlikely similarities and groupings. As we learn in Chapter Three, for Judd, as for Warhol, to call something mildly interesting is not damnation by faint praise, but rather a supreme compliment. Satisfying echoes bounce across these chapters: Judd’s empty cubes with Warhol’s chock-filled time capsules, LeWitt’s variations with Warhol’s mis-transcriptions and glitches. The correspondences culminate in the book’s final chapter, “Skin Problems,” which is easily its best, with careful readings of the Race Riot paintings, Ladies and Gentlemen series, and Warhol’s collaboration with Jean-Michel Basquiat. This chapter’s archive is deep, with meticulous attention to the images’ source material and the people who appear in them. The historical precision pays off, providing more than adequate foundation for Flatley’s compelling speculations about race, skin, surface, and color.

Amongst the various senses of the word “like” engaged throughout the book, I would have enjoyed seeing the colloquial “like”–the much-maligned filler word. A quick glance at the opening pages of a: a novel (1-2) confirms that it was indeed in Drella’s vocabulary: “like uh, I, wha—”; “Yeah, she has a, y’know, like, like a, like a, like all….” In answer to the question, what is the purpose of art? Warhol once said that art is just something that fills up space on the wall. Filler words, too, just fill up space: they are a dime a dozen. But “like” as a filler can also be meaningful. It can be a shorthand way to indicate that one is giving a casual impression or paraphrase, not a perfectly accurate replication–much like Warhol’s own rough, imperfectly repeated images. They are just likeness, after all. They don’t pretend to be authentic, inimitable, or bullet-proof in every respect.

What I like most about Flatley’s book is that mostly, it isn’t just about great works of art, but rather misfits, rejects, and things that don’t fully belong–like Warhol’s favorite swimmer in the Esther Williams film who jumped at the wrong time.[1]Andy Warhol, The Philosophy of Andy Warhol, 93. We get Marilyn and Jackie, but also hoard-filled rooms, cock drawings, pimples, wigs, and misprints. All of this mess is oddly sanitized in the Whitney Museum’s Andy Warhol–From A to B and Back Again. The galleries are filled with large painted canvases, and one requires a fine-toothed comb to find the sex, drugs, and rock and roll so prominently featured in Warhol’s work in other media. Many of the canvases, pleasingly, are not the usual suspects–there’s a lot of very early and very late work–but the Warhol we get here is primarily the Business Artist. Where is the downtown, underground Warhol? Where are the superstars and queens; where are Gerard, Edie, Mario, Brigid, Marsha, and all the rest? They’re in Like Andy Warhol, and this is where Flatley succeeds in giving us a Warhol that we could use more of today. 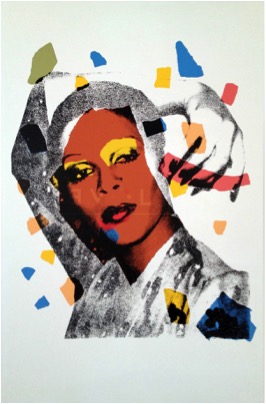 Homay King is professor of history of art and co-founder of the program in film studies at Bryn Mawr College. She is the author of Virtual Memory: Time-based Art and the Dream of Digitality (2015), which won the SCMS Anne Friedberg Award of Distinction, and Lost in Translation: Orientalism, Cinema, and the Enigmatic Signifier (2010), an inspiration for the Metropolitan Museum of Art’s China: Through the Looking Glass. Her essays on film, contemporary art, and theory have appeared in Afterall, Criticism, Discourse, Film Quarterly, October, Qui Parle, and elsewhere. She is a member of the Camera Obscura editorial collective.