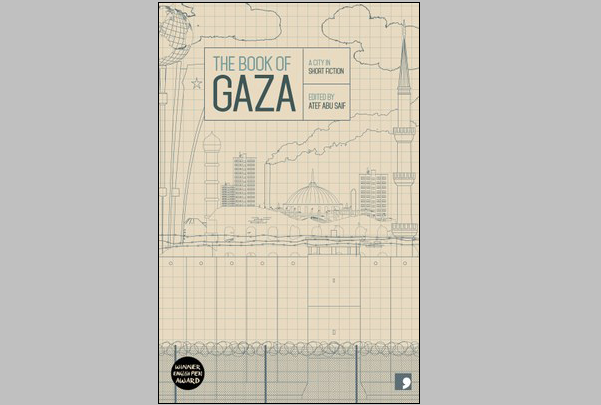 Is there a characteristically Gazan sentence? Could it be this one from Asmaa al-Ghul’s recent short story “You and I,” published in The Book of Gaza (Comma Press, 2014): “Drops of morning dew evaporate taking the pain with them, because we are together”? Or this sentence from Zaki al ’Ela’s 1980 story: “What more could they [the Israelis] do to us?”

If it is hard to imagine that one sentence could capture the distinctiveness of Gaza or belong to it alone, The Book of Gaza, edited by Atef Abu Saif, stimulates such literary-political questions. Therein lies its power: that it registers literary voice from the most densely populated place in the world, which is made up of refugees from Israel’s founding expulsions of 1948, and which is living through the longest illegal occupation in modern times.

The ten stories in this collection range historically and generationally from 1980 to the present, covering the First Intifada to Israel’s 2009 war on Gaza. And they also range thematically: from the collectivity of a “people’s will” to more inward and personalized sexual fantasies and frustrations. It is clear from the selection that the editor chose multiple perspectives and locations in order to showcase a wide range of literary Gaza: from national resistance stories to more subjective articulations of loss and anxiety; from an intifada generation to the more recent experiences of siege and closure; and from several older to many younger writers.

Despite such a wide scope, commonalities of experience persist, and shared tones and images clamor for attention. Alongside the hope, resistance, and challenge that mark stories set in the 1980s (to which I will return), there are the endless sounds of fracture and disconnection: divorce, loneliness, rejected love, (un)bridgeable political divides, daily humiliations and curses, severed heads, cracked skulls, dead children, street beggars, bullets, soldiers, and slaps.

In fact, an oppressive atmosphere is palpable: overlaid with rut and frustration. The reasons are many: occupation, siege, closure, curfew, war, political defeat, national fragmentation. But also: the internal forces of social conservatism and women’s oppression. Such sounds of social un-freedom proliferate. Women are constantly policed by whispers from neighbors, a brother’s slap, male shouts, forced veiling, and repressive religious authority.

Throughout this collection, the distortions of oppression ring loudly. Like in Mona Abu-Sharekh’s “When I Cut Off Gaza’s Head” or Najlaa Ataallah’s “The Whore of Gaza,” where Gaza is a character castigating desire and crushing opportunity. First as “a sacrificial offering: Gaza’s head,” then as “this entire society itself…incarcerates people.” Amongst the mundane and ordinary, stark and violent feelings emerge. A macabre imagination is evident. But also something twisted and (at times) lurid.

Yet another form of the distorted ordinary is presented in Yusra al-Khatib’s “Dead Numbers.” In al-Khatib’s piece, numbers are initially digits of hope and potential connection: a past is to be reactivated by a phone call: “She would be waiting for him eagerly after all this time, her words animated by the un-faded memory of him.” Yet the story soon reaches a dead end. A mechanical voice at the end of the line suggests that numbers, like love, die in Gaza.

The banality and pain of numbers comes across very forcefully in Asmaa al-Ghul’s beautifully executed “You and I.” The act of counting here structures and dominates: “I count every contiguous and incidental thing: successive drains (like I am doing now); the storeys of buildings, their windows, balconies, electricity pylons, the doors of closed shops.” She also counts graves: “I’m near my house. This is the only landmark in the area…How difficult it is to count graves. How cruel we are. And how short life is.” How can one explain the narrator’s obsession with numbers and counting, her “eternal addiction”? It speaks to a whole condition of being. Counting makes sense of “the sadness of past days and the obscurity of the coming ones” and alleviates the pain of lost love. It also, crucially, presents a veneer of order in a world of checkpoints, blockade, and arbitrary death—a world where little makes sense anymore and even beginnings are barren. The story ends by invoking a new day. But it brings “an unfamiliar cluster of clouds behind the grey” and more counting. To count is to be un-free, stuck in a cruel reality that both repeats itself and gets worse by the day.

Atef Abu Saif’s “A Journey in the Opposite Direction” raises the possibility of escaping a suffocated Gaza: “Gaza is just a big prison.” Now: “the share of disappointments, defeats and unpicked fruit was greater than it had been ten years ago.” With Israel’s closure on one side and Egypt’s arbitrary border system on another, it is impossible to know when one can leave or return. Uncertainty is rife; and being stuck in limbo is the order of the day. The present becomes about obstacles and daily humiliations and defeats. And the future is futile: “since just to think about the future was enough to kill any passing moment of happiness.” This is what his four characters come together to register— capturing, in the process, how Gaza is always harder on women than men. Only the past seems to carry any sense of connection and community. But that is long gone. Hope lies in its renewal, and maybe in the fact that the storm at the end of the story brings them close again: “Then together they burst out laughing. The wind carried their laughter far away, across the frothy, churning water to the heart of the sea.”

What seems lacking in these stories about present-day Gaza is something like Zaki al ’Ela’s “Abu Jaber Goes Back to the Woods,” which ruminates on individual heroism in national struggle. Or something like Ghareeb Asqalani’s “A White Flower for David,” delineating the troubled contours of a Palestinian-Israeli friendship. These hark back to the time of Israel’s pre-closure occupation (instituted in 1991), when going to Israel or meeting Israelis was an everyday affair. Writers could then imagine mass popular resistance, and Israelis could be seen not only as enemies to be struggled against but as potential political allies and friends as well.

Israel’s decade-long siege of Gaza (and its numerous wars, invasions, and incursions) has changed all that. Having disengaged from Gaza in 2005, Israel now suffocates and occupies it even more violently than before, with bouts of massive destruction that have had devastating human and political effects. Palestinian feelings harden when brutal and cruel occupying soldiers are the only Israelis that Palestinians see. As when, after witnessing Israel’s killing fields in 2009, Asmaa al-Ghul wrote: “Never ask me about peace again.” It is Israel inflicting mass suffering that nurtures such Palestinian despair about peace. Such loss of hope for a better future is the bane of Israel’s existence.

If Gaza could speak with one voice, maybe it should be Najlaa Attalah’s. In a piece written during Israel’s most recent war of 2014 and titled “In Gaza We Are Not OK,” she says: “My tragedy is that I don’t just want to live. Nor do I want life to simply go back to the way it was. Nor do I want to go on waiting for a new war where we say at the beginning, ‘tomorrow, the war ends,’ and say at the end, ‘we just want to live.’ I don’t want that war to begin in the first place.”

Gaza wants to live. Its call for life will, ultimately, be honored. The Book of Gaza is a good place to connect with its vigorously human voice.

Bashir Abu-Manneh is reader in postcolonial literature and director of the Centre for Postcolonial Studies at the University of Kent in the UK and author of The Palestinian Novel: From 1948 to the Present (2016) and Fiction of the New Statesman, 1913-1939 (2011).