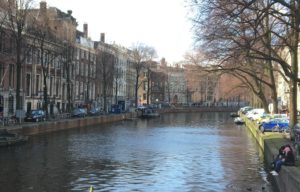 Imagine a place where white people have all the power and all the weed. A widely accessible theme park designed for the minor beneficiaries of Euro-American mercantile capital. The managed, institutional face of white power. A world heritage site for the kingdom of Mordor.

Instead of fire pits, instead of enslaved and slavering orcs, adult Disneyworld. The park is staffed by animatronically correct figures, upright and pedaling, who maintain a constant, friendly distance from each other and from the visitors strolling the canal-girdled streets.

Tour barges glide along beside us. We, the pedestrians, are a diversely white assembly of couples and packs who converse in English. The people who rattle past on their self powered conveyances speak an orcish tongue, but they’re always helpful when asked for directions. Perfect English is the only ostentation they allow themselves. This conforms with a larger, geopolitical self regard: pride in rational reckoning, in margins and percentages, the self regard of a complex and ostensibly well-bounded liberal state.

Is this vision a hallucination, or is it what a Walter Benjamin translator might call a momentary perception of historical truth? Hard to say. It arises as I enter the Rijksmuseum, and is accompanied by the memory of walking these passages wearing that old Diesel skirt during my time as a visiting scholar twelve years ago. In this role, a hybrid of tourist and grandee, your residency isn’t long enough to understand a place. The best you can hope for is a prolonged awareness, formed at eye level, of the ways a place puts itself on display. The ways it puts leisure to work.

It is hard to believe Netherexit will happen, even if Geert Wilders gets in. Mordor cannot lose its playground, its garden of dank delights tended by AirBnB, a system for distributing global white people. The impure piety of Mordor’s board of governors comes out only in fleeting moments, in a museum tour guide’s explanation of the immaculate conception, overheard in a room full of glowing fifteenth century annunciations. Mary, he says, was born without a black, ah, spot on her soul.

Back to the Editor's Blog