The past can be like an old wound that never heals, especially when the scab keeps being picked. In the wake of Oakland transit cop Johannes Mesherle’s recent involuntary manslaughter conviction for the on-duty shooting death of unarmed, 22-year-old Oscar … END_OF_DOCUMENT_TOKEN_TO_BE_REPLACED

“Justice for Oscar Grant!” As I sit in front of these keys I know that I could have written this essay 100 times before and will likely need to write it 100 more times before I die, simply because I … END_OF_DOCUMENT_TOKEN_TO_BE_REPLACED

Just in time for the Independence Day weekend, the Library of Congress has released new research on the Declaration of Independence. Apparently when Thomas Jefferson was drafting the document he initially used the word “subjects,” then blotted it out and replaced it with the word “citizens.” Library of Congress preservation researcher Dr. Fenella France has used spectral photographic imagery to uncover the original markings. In the popular press, Jefferson’s writing is described as a “Freudian slip” …

In May of 1963, US Attorney General Robert F. Kennedy convened a meeting of black representatives from the realms of politics, academia, and the arts. The remarkable gathering included James Baldwin, Lena Horne, Lorraine Hansberry, Harry Belafonte, social psychologist Kenneth Clark, president of the Chicago Urban League Edwin Berry, and Jerome Smith, a young activist and CORE fieldworker. Kennedy offered defensive platitudes of his record on civil rights; Clark, Hansberry, and others tried to impress upon him the inadequacy of the federal response to the situation in the south. Both sides spoke past each other until the meeting was brought to a halt by the soft-spoken yet passionate interruption of Jerome Smith.

Dear President Obama, This holiday weekend brought news of the failure of BP’s latest strategy for plugging the oil flow in the Gulf of Mexico – the ominously named “top kill.”  It now seems increasingly likely that oil will continue … END_OF_DOCUMENT_TOKEN_TO_BE_REPLACED

Depressing things going on at Middlesex University in the UK following management’s crazy decision to close the Philosophy Department. After student occupations in protest, a number of students and faculty have been suspended from the University. Faculty suspended are Professor Peter Osbourne, Professor … END_OF_DOCUMENT_TOKEN_TO_BE_REPLACED

For nearly a month, a large swath of University of Puerto Rico students across campuses on the island are striking new policies that limit tuition waivers, among others. They have taken over the main campus leading to its shutdown until … END_OF_DOCUMENT_TOKEN_TO_BE_REPLACED

Stray dogs are the unofficial cartographers of the streets of Greek urban centers. They roam the cities and form a relationship of belonging only with the spatial parameters that describe a vague outline of home. Most of them are not feral, however, they stand in a league of their own, marking their difference from the contained cuteness and cuddliness of domestic pets. In recent years, some stray dogs have risen to the status of the urban hero, transcending any limitations speciecists might ascribe to them. Such a canis heroicus was Kanellos, who died as a legend in the summer of 2008.

Would you hit it? *(by which I mean would you go to this conference?). The title is Limiting Knowledge in a Democracy and check out the list of speakers. Oh wait a minute… are there just two, 2, dos, deux women listed out of 27 (fyi 7.4%)?

Greece is in revolt. Not surprisingly, though, the protests there are being totally misrepresented in the mainstream media. Much attention in the US press has focused on the spectacle of the riots and on the three tragic deaths in a … END_OF_DOCUMENT_TOKEN_TO_BE_REPLACED 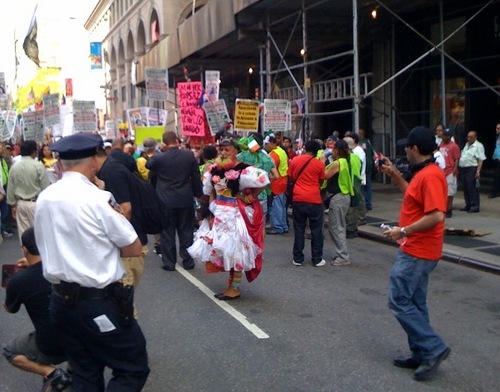 Before everything else, the Cochabamba conference was remarkable for bringing together a large group of radical activists from all around the world.  The social connections and sense of possibility that resulted from the exchanges that unfolded in this setting were … END_OF_DOCUMENT_TOKEN_TO_BE_REPLACED

Two of the more influential books that have taken swipe at our contemporary intellectual property landscape concerned themselves with trademark, logos, and capitalism. Here I am thinking of Rosemary Coombe’s seminal The Cultural Life of Intellectual Property and Naomi Klein’s more activist take on the subject, No Logo. What would happen if you condensed the arguments in these two books into a 15 minute video?

Ever since the effective collapse of the Copenhagen Climate Summit, I’ve been thinking about how we represent survival and futurity in a conjuncture in which hegemonic ideology is so clearly bankrupt and the ruling classes in the world’s most powerful nations are so transparently unwilling to take the steps necessary to save civilization.