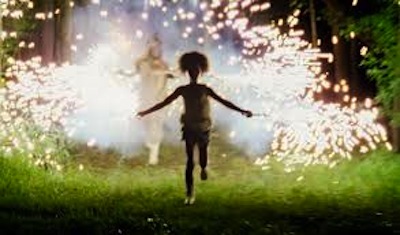 This film should have been a choice text for me; I love post-apocalyptic stories that end badly. But the heaps of critical praise the film has garnered don’t even seem to notice it as a dystopia. “This movie is a blast of sheer, improbable joy,” writes the New York Times, and calls it a great film to see for July 4, as it is “animated by the same spirit of freedom it sets out to celebrate.” It also likens Hushpuppy to a new Huck Finn. [1]A.O. Scott, “She’s the Man of This Swamp,” New York Times, June 27, 2012, C1.

Quvenzhané Wallis, the then six-year-old actress who plays Hushpuppy, has now been nominated for an Oscar. While I support the recognition of black talent (though I don’t believe that the power of media representation stands in for any social equity) I am deeply suspicious of why she is being so celebrated. This isn’t the first case of black children being depicted as insensitive to pain, or of black suffering and survival being used to symbolize American democracy.

With its dystopian landscape, the film evokes the precarity, instability and vulnerability of black life. The first shot of the film is of a shack, tipping on rickety foundations, with a door that, if you exited from it, would drop you at least fifty feet to the ground. But the film’s disenfranchised subjects, black and white, are not victims, the film insists. Hushpuppy, her father Wink and the rest of the residents of the Bathtub are brave survivalists, refusing the life of the “Dry World,” whose practices are in opposition to the laws of the universe. Modern man’s misuse of the planet has led to ecological devastation so severe it has called forth the horrible Aurochs, Paleolithic monsters long frozen in the ice of the South Pole, as well as a terrible storm which will inevitably destroy the Bathtub. But the decision made by Wink and the other residents to stay, despite the coming storm, is politicized as an enlightened awareness and love of the free world, some kind of contract of natural man with an awful God, a righteous ascetic renunciation. The film romanticizes their abject poverty. Its wild magical realism, unlike that of Pan’s Labyrinth by Guillermo del Toro to which it has been compared, aestheticizes the filth and destruction around them with major chords of saturated bright color.

With a heroic soundtrack, composed by the filmmaker Benh Zeitlin, the film thinks itself a grand epic in the naturalist tradition, depicting how people, stripped to bare life, both struggle against and embrace nature in its cruelty and majesty. They provide a lesson for us all; we must renew our relationship with the natural world by recognizing our animal essence and releasing the beast in all of us. We must go back and remember what it took for early man to survive if we are to continue as a species.

The film is grounded in a particular version of primitivism. It oozes a primordial mud that covers everything. At the schoolhouse, the teacher gives a lecture to the children on survival, pulling up her skirt to reveal a tattoo of primitive drawings, from, as she says, “back when we all lived in the caves.” They depict early man’s battles against the Aurochs. “Y’all better learn how to survive, now,” is the moral of the lesson.

Hushpuppy, in her grime-covered and half-naked childlike innocence, embodies the Western fantasy of the primitive. With her whimsical exploration of the world, her little head tipped to one side as she listens to the heart of chick, or a hog, or her father, she narrates for us the wisdom of the ages, delivering the primitive’s message to mankind. “The whole universe depends on everything fitting together just right,” is her refrain throughout the film. “If one piece is busted, the entire universe will get busted,” she warns. With her innate understanding of the beauty, precarity and cruelty of nature, Hushpuppy is able to tame the Aurochs. “‘Beasts’ is film as natural mystery museum,” reads a review, and I did feel as if I were standing before a panorama of early man and mammoth.[2]Lisa Kennedy, “Bracing Beauty.” This sense of the noble savage is clearly marked by Hushpuppy. “If daddy kill me, I ain’t gonna be forgotten. I’m recording my story for scientists in the future,” she says.

Like Hushpuppy’s father raging against the storm, gun in one hand and bottle of gin in the other, the film’s narrative core is the politics of the black family, circling around the stability, or lack of stability, in the black home. Like the critically acclaimed film Precious (Lee Daniels, 2009) its narrative is an American ur text in its staging of the black family as pathological, riven with violence and dysfunction. The poor are diseased; Precious’s mother with AIDS and Hushpuppy’s father with a mysterious illness that also affects his blood. Most of all, the poor cannot afford to love. “I can count the times I been lifted on two fingers,” say Hushpuppy.

I had a compelling conversation with a colleague who insisted that the film was self aware, posing such pain and chronic catastrophe of poverty as unresolvable, and that the film showed a triumph of the disenfranchised to create community. I don’t grant the film that complexity. I just wanted to give Hushpuppy a bath, and take her in my arms.