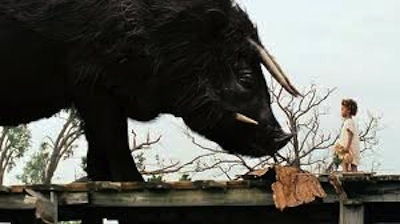 After the opening shot of a dilapidated house, Beasts of the Southern Wild begins mise-en-scène with a tight close-up of the house’s interior, the screen filled with small brown crossed legs, a cluttered dirty floor, and a small brown hand holding a dirty bowl, and pouring water on a mound of dirt.  The camera pans up and we see the hand belongs to a little girl who is holding in her other hand a baby bird that she places gently in the dirt clod she’s been molding.  Then we’re outside with her leaning into the strong wind; she’s dressed only in an undershirt, underpants, and rubber boots. Listening to the heartbeat of a chicken, we hear her thoughts about the hidden language of heartbeats. We get Hushpuppy as the heart of the film.
The story that became Beasts underwent two transformations. Lucy Alibar first wrote the play Juicy and Delicious about a young white boy and his dying father. Then that play was transformed through Alibar’s “attempt to detangle her own complicated relationship with her father in the midst of his serious illness” into the screenplay for Benh Zeitlin’s film that centers on a young black girl and her dying father in a community called the Bathtub in coastal Louisiana. This last transformation and the introduction of black characters into the screenplay does the work of naturalizing their precarity.  And the introduction of black characters at the center of the film and into communities that, as I understand from colleagues who are from Louisiana, are in reality white makes their precarity unreadable as precarity.
Hushpuppy and Wink are at one in and with the dirt. When such stark images appear in televised “Save the Children” ads they might move some viewers to want to help Sally Struthers feed and care for little black children, but in the US, domestic blackness rarely results in something like empathy. So Hushpuppy and Wink’s blackness in the film is necessary and not incidental; it is at the heart of the “structural antagonisms” at work on and off the screen.  An antagonism that structures an inability to see the black, that “rather than merely a willful refusal,” is a “structural prohibition.”[1]Saidiya V. Hartman and Frank B. Wilderson, III, “The Position of the Unthought.” Qui Parle vol. 13, no. 2 (Spring/Summer 2003) 183–201 (189–190).

In a brief blog post titled “Becoming Wild,” Nicholas Mirzoeff writes that Beasts “has the dramatic achievement of being perhaps the first film to create a means to visualize climate resistance” and it  “give[s] us a way to begin to imagine wild alternatives to governmentality, without sentimentalizing the prices that have to be paid for that. By mixing magical sequences with cinematic realism, it does for climate resistance what Pan’s Labyrinth did for anti-fascism.”  The wilding Mirzoeff references here has to do with uncultivated, undomesticated plant life (think Topsy the plant and the violated child) and also undisciplined ways of seeing, what he calls a “wild view.” But because this view, this optic, is unraced in Mirzoeff’s account he can posit a “we” that resists climate change and governmentality and that is mobilized primarily through the characters of Hushpuppy and Wink.  This “we” resists contending with and “papers over any contemplation of violence as a structuring matrix–and weds us to the notion of violence as a contingent event.”[2]Frank Wilderson Red, White, and Black: Cinema and the Structure of U.S. Antagonisms (Durham, NC: Duke University Press, 2010) 249.

Mirzoeff never mentions race, but that this film (or/as “wilding”) works for so many viewers has everything to do with the black bodies at its center; bodies that index those other primarily black bodies set adrift in the devastation and devastating aftermath of Hurricane Katrina, but also those working class black bodies and people who, in this culture, have continually marked a space of joy, of “making a way out of no way” and access to something like freedom (primitivism) in spite and in the face of…everything.  But those bodies also index the other definition of wilding, one that entered the lexicon in 1989 when five young black men were railroaded and wrongfully convicted of the brutal rape of a young white woman in Central Park.  That’s how I came to understand wilding and it was a term that many people, across race, adopted to describe young black people as animals, feral and undomesticated.
It may be that “[d]isaster, survival and the physical deprivation that comes with it can, it is suggested, generate meaningful alternatives.” But at least part of the disaster on view here is everyday black life lived in the wake of slavery and neither this film nor many of its viewers actually account for that life as disastrous
If one sees this film primarily as a way to visualize resistance to climate disaster then that requires that one have no desire to alleviate Hushpuppy’s devastation; have no desire to care for a child who says, “I can count the times I been lifted on two fingers.”  And in that absence of care the film reveals the structural antagonism to be feeling for the figure of the black.  The film needs black bodies because how else could incipient sexual and other violence, the violence of extreme poverty, flooding, the violence of a six-year old girl child living alone in her own ramshackle house with no mother or father, be inspiring and not tragic?  How else could it “just be” with no backstory, no explanation? (We should think about casting choices for Beast and Precious next to those made in films like Winter’s Bone and Bastard Out of Carolina to see the difference that race makes.)
How does a little black girl child orphaned and abandoned become a vision for climate resistance for so many people who watched the film?  It is precisely this kind of misprision, this not feeling or seeing, that subtends  an event like the death of Glenda Moore’s sons during Hurricane Sandy.  Riffing on Invisible Man, optic white does not see your plight.
The film ends with Hushpuppy, six, years, old, motherless, fatherless, kinless, leading a group of black and white children and adults through a causeway after pushing her father’s corpse out to sea.  She is caretaker, man, boy, girl, woman all within herself; she is part of the community but complete unto herself. Abandoned to precarious life.