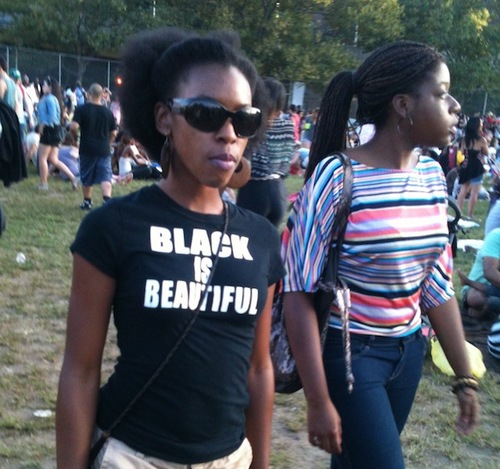 All skinfolk ain’t kinfolk — an ole and fitting saying from my long-ago Red, Black & Green Liberation upbringing that could be well applied to the Sixth Annual installment of the New York City-based Afro-Punk Festival. Last week, there were some blogospheric lenses shed on the potential problem of the burgeoning consumer profile of Afro-Punk as brand and destination for Negro culture vultures and those who would follow them to whatever end. Where one might fall in that debate depends upon whether you think it vital for all we folk darker than blue to possess a herd mentality, as well as how you feel about both black people and the (long aboveground) punk subculture courting/being embraced by the mainstream. If you only wanted every act and attendee to bear the pin-in-nose bona fides of a D.H. Peligro, then this year’s festival was Not Yet Uhuru. On the other hand, if bagging or bedeviling hipster white women is your thang, then you might could have had as much fun as numerous brothers and the Fruit of Islam security detail which abounded in Brooklyn’s Commodore Barry Park. Raising an eyebrow at the inclusion of Gym Class Heroes on the bill is fine – otherwise, the whole darned thang ought to be about a clarion Message to Love.

Would it really be criminal if my own cosmic Americana group Sacred Arrow were welcomed to the roster, despite the fact their childhood adoration of Afro-Anglo sistahgal Poly Styrene is long muted, and their thread rips now just an accidental by-product? Although Sudanese melanin-free, Sunset Beach, CA’s Black Bananas, who made this year’s best go-go LP just as Wind Me Up Chuck Brown enjoyed his final season in Chocolate City, certainly should be tapped for 2013.

For my own part, I care less and less about the chimera of Black Unity and the will to self-othering with every passing year. But then I am older than punk, unless you stretch the mythos back to the hallowed early postwar boom of such true originals as the first so-called black hippie Arthur Lee and brown brer ? who led the Mysterians. I know I do. And what about Screamin’ Jay Hawkins and good ole Louis Jordan? As Granny (nigh in a) Rocker, I expected the noise explosion at the Navy Yards to be neither multicultural cathouse au naturel nor vanguard of sonic provocation. It was a fun afternoon out to enjoy a potluck picnic with a soundtrack spanning from perhaps not-punk-but-sho’nuff-funky supernova Miss Janelle Monaé to Frankie Beverly and Maze (courtesy the ol’ skool deejay) on the last day of summer.

I am heartened by friends Matthew Morgan and Shawn Peters’ ability to keep the par-tay goin’. Such are the wages of coming of age during the long decades of sporadic Weird Africana recognition BAP (before Afro-Punk). The “brand” ain’t nowt but the latest electric lasso around black difference, suffering growing pains due to its being one of the widest and most successful corrals of same. The wax fax is: although disassociated for six years from Afro-Punk: The Movie (2003) documentarian James Spooner, for the festival to grow and sustain itself it would have to expand its horizons, blood supply, and bank resources. The fear that the festival would become so corporatized that it becomes completely deracinated from its Afro(Atlantic) and punk DIY roots is understandable, yet must be balanced with the Way America Works.

What skinfolk do has been vulturized and ultimately co-opted and altered ev’ry since well before O.G. punk Henry “Box” Brown shipped himself into “freedom.” Heck, right here in New York colony few bankers and tourists and even Occupiers pause in their quotidian travails to consider the veritable Afro-Kelt alternative paradise that was Five Points now buried ‘neath the Stock Exchange and corporate tower environs. Anyhow, once the festival has donned the, erm, complection it has, it’s rather too late to get up to much but bounce to the mirthful and maniacal Flatbush Zombies in the impromptu Nike-sponsored skatepark like we did.Flatbush Zombies are a fine, fly, Dr. Funkenstein-and-420-friendly ensemble that embodies the cultural shift from mid-Aughts when the ‘Hood was trying to look like rednecks at a Skynyrd concert circa 1974 to the present when snickers accompanied the catchphrase “Hey hip-hop! punk wants its look back…” around the festival grounds. But these hip-hop heads are for the chirren. We grown-ass mamas were the few, proud and brave to get down in front to the equally funky sounds of the mighty mighty Boogiedown Bronx star on the come-up Gordon Voidwell, while the youths hung back in awed confusion from his sartorially splendid brocade ensemble (from my closet circa ’83 / Paisley Park’s dawning), witty and oh-so fitting odes like “White Friends,” and the uncut BOMP! emanating from Voidwell’s incredible rhythm section anchored by drummer/ Pegasus Guillermo Brown.I am no longer insecure enough that I need to contemplate how Afro-Punk – in definition and in situ – is being framed; it was fine and big fun just to shake our ass. Alas, we can’t have nothing inviolate in this place called America; the Dark Tower is too porous. Brothers and sisters need to care for and respect each other – and, yep, smile on your bruh with purple hair along your local MLK Boulevard. Afro-Punk: ain’t no thang but a buck-and-wing. So knows Ms. Monaé, who was channeling Electric Ladyman Jimi Hendrix’ “Little Wing” as I exited ’round ’bout dark-thirty…to the ire of a biracial Occupy Wall Street habitué outside the gates yelling down the Fruit of Islam that “a black man could not get into Afro-Punk.”

Kandia Crazy Horse is a veteran rock journalist and author of Rip it Up: The Black Experience in Rock n Roll.