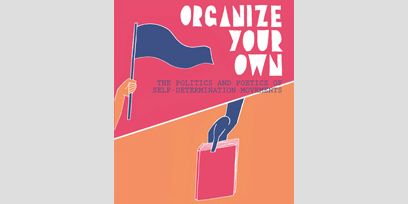 “People getting together.” This is a phrase that comes up early and often in Organize Your Own: The Politics and Poetics of Self-Determination Movements (Soberscove, 2017). In the introduction to the book, Daniel Tucker, the curator of the exhibition and event series from which the book takes its title, writes about the power of people getting together to mobilize around shared demands. Such collective mobilizing tends to bring to mind the consonance that “togetherness” usually evokes. What is the sound of people getting together? We often think of voices rising in protest, in unison, in concert.

But what if our ears were attuned instead to the dissonant hum of everyday organizing? To the disjointed clamor of people trying to work out how to get together across deep chasms of difference? The starting point of Organize is just such an instance of discordant collectivity: when, in the tumult of the 1960s and 1970s, poor and working-class white activist groups in Chicago and Philadelphia got together with radical Black and Latino organizations to fight racism, inequality, and police brutality. Specifically, Tucker was interested in the history of groups like the Young Patriots Organization (YPO), white southerners who had fled economic devastation in Appalachia only to find it again in Chicago’s Uptown, and who joined the Black Panthers and the Young Lords in forming the original Rainbow Coalition. The vital dissonance of this radical coalition is captured by former Panther Malik Rahim, who describes attending a conference and seeing “these guys that had the confederate flag on their uniform, but also the Free Huey Button, also the Black Panther, and they were running armed security for my brothers.”[1]Quoted in Romero, Organize Your Own, 115. Remarkable in its own time, this dissonant history is ever more relevant–and inspiring–in our current political climate.

For the exhibition, Tucker invited a group of artists, writers, and activists to respond to a selection of materials taken from this historical moment: Time of the Phoenix, a 4-volume collection of poetry published by the YPO; American Revolution 2, a 1969 film documenting the beginnings of the Rainbow Coalition; and a 1966 quote from Stokely Carmichael urging white supporters of the Civil Rights Movement to “go into their own communities—which is where the racism exists—and work to get rid of it.”[2]Quoted ibid., 14. The varied responses—including video, photography, poetry and song, prints and paintings, archival materials, texts, interactive and social practice work—were exhibited in Chicago and Philadelphia in early 2016. These exhibitions were accompanied by a series of events including performances, artist talks, screenings, and discussions. In one sense, the book can be seen as a catalog for this larger show. It is divided into three sections, with the opening section comprising a series of texts reflecting on and extending the central questions and concerns of the exhibit; the second section, transcriptions of some of the panel discussions; and the final section, brief representations of each of the exhibited projects.

But to think of this book only as an exhibition catalog would be both to overestimate its coherence as a publication and to underestimate the significance of the political work it is doing. As catalogs go, this one is somewhat incoherent, with its various pieces each feeling quite partial, and the relationships between them not always made explicit. Characteristic of this incoherence is the book’s third section, in which some of the projects are represented with straightforward textual descriptions or documentation, others with fragments of performance scripts or poetry, and yet others by even more elliptical means. Taken together, these snippets do not give a clear sense of what the exhibition looked like, how it was structured spatially and temporally, how it felt or sounded. And in a larger sense, the overall book also feels disjointed in terms of its discursive register. From section to section and from text to text, we move between the poetic, the scholarly, the activist; between the precision of formal analysis, the mannerism of artist talks, the candidness of oral history; between the deliberately obscure and the insistently blunt.

This incoherence is partly a reflection of the exhibition, which was itself a motley of people, projects, and events, often very different from each other. It also reflects the decision on the part of the book’s creators to produce “not a linear narrative, but rather a collection of intersecting accounts.”[3]Ibid., 8. Most importantly, the book’s disjointedness enacts on a formal and discursive level the disjointedness of the very historical moment that it takes as its starting point and its inspiration: the necessary dissonance of coalition politics, of getting together across seemingly irreconcilable differences. This is the kind of getting together that matters the most, then and now. Organize takes different voices, speaking in disparate discursive registers, and places them side by side, not attempting to create what Hito Steyerl would call a “chain of equivalencies” by resolving disparities, but rather in “an experimental situation of…incongruous concatenations,” letting disparities ring loud.[4]Steyerl, The Wretched of the Screen. In this sense, the incoherence of the book is its political strength, an expression of its politics of dissonance.

What is the sound of people getting together? Organize suggests it is the sound of what Uptown organizer Peggy Terry would call “kitchen table” or “corner conversations,”[5]Romero, Organize Your Own, 111. those hard conversations we must have with our own, in order to organize amongst ourselves. And once we have organized our own, then come the even harder conversations, when our own meet our others. It can be a discordant sound—awkward, messy, imperfect, but urgent, just as the coalition politics to which those conversations give birth.

The kind of radical cross-community organizing represented by the Rainbow Coalition is necessarily local, specific to each instance, inherently unstable, and often short-lived. For this reason, such histories tend to get lost, if not suppressed. Organize joins recent books such as From the Bullet to the Ballot: The Illinois Chapter of the Black Panther Party & Racial Coalition Politics in Chicago and Hillbilly Nationalists, Urban Race Rebels, & Black Power: Community Organizing in Radical Times—both referenced in Organize itself—in bringing this past to bear on the present. In both the history that it revisits and in its own dissonant form, Organize offers a model for the difficult but necessary work of getting together enough to act together.

Toby Lee is an artist, anthropologist, and Assistant Professor of Cinema Studies at NYU’s Tisch School of the Arts, where she teaches the history, theory, and practice of documentary and the non-fiction moving image. She works across film, video, drawing, and text, and she is currently writing a book on the politics of cultural production in contemporary Greece.