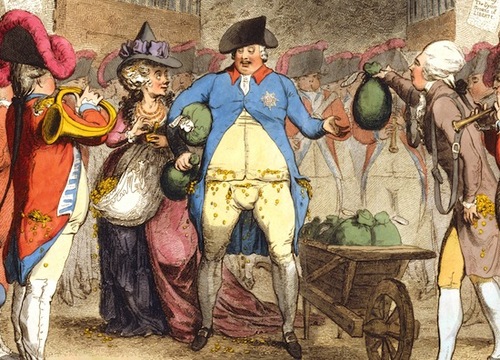 ‘Tis to be a slave in soul,

And to hold no strong control

Over your own wills, but be

All that others make of ye.

Formal slavery has been eliminated, but (as anyone who works from nine to five can testify) the idea that you can alienate your liberty, at least temporarily, endures.

David Graeber’s Debt: The First 5,000 Years is an outsize exposition of social, historical, and institutional constructions of value and the high political stakes they have for human societies. It spans an impressive gamut of practices ranging from religious beliefs about primordial obligation, nineteenth-century positivist notions of “social debt,” and the bond between states and the markets that parasitically rely on each other to survive.

In his Philosophy of Money, Georg Simmel wrote, “just as a poem is not simply a fact of literary history, but also an aesthetic, a philological and a biographical fact so the fact that two people exchange their products is by no means simply an economic fact” (52-53). People invest economic objects with a calculable value as if it were an inherent quality, though Simmel left the question of what value is or means as ultimately “unanswerable.” Marx took a similar approach, notwithstanding his remarks on the element of unaccountability in money as an expression of frayed social relations.

Graeber’s Debt offers a synthesis of transnational social practices concerned with value, exchange, and money but moves in an exciting novel and opposite direction. He situates debt as the quantification of promise and obligation and the threat of violence behind that calculation (in contrast to the complexities of obligation in self-cooperating civilizations, in what is usually referred to as mutual aid). He starts with the position of absolute debt to the cosmos (or humanity), however alien it might seem in the individualistic societies familiar to his readers. However, by beginning a history of debt from the vantage point of “many different fraudulent ways to presume to calculate what cannot be calculated,” Graeber challenges linchpin theories of debt that “always end up becoming ways of justifying structures of authority,” such as the police, markets, and states (69). In doing so, he rejects a teleological approach and ventures to salvage the notion of society from the modern nation-state — “a secular god” — as we have conceived of it since at least the French revolution.

In interrogating the moral grounds of economic relations, Graeber also reevaluates communism (with a lower-case “c”) as the basic foundation of human society, down to the exquisite etymological details of sociolinguistics. In English, for example, “thank you” derives from a phrasal verb meaning “I will remember what you did for me.” He distinguishes between commercial economies and “human economies,” exchanges in which money acts more as a social lubricant than facilitates the purchase of things, with domestic arrangements such as marriage, concubines, and other conjugal arrangements used to assert male control over women. The concluding chapter surveys the most pressing forms of debt in the global North, which has essentially been aggregated war debt since 1790. As we pass the 50th anniversary of Eisenhower’s remarks about the United States as a “military-industrial complex,” Graeber’s book also serves as a reminder of the behemoth of sea, land, and air power, a “doctrine of global power projection,” that conjoins the social malaise of debt and death and the glorification of economic and political violence necessary to sustain them.

Importantly (and consciously) Debt overturns historical misconstructions such as the myth of barter (what Graeber calls a pernicious and long-lasting fallacy perpetuated by Adam Smith); the “free market” (a concept which has never sustained a universal meaning); and the ubiquitous but false notion that money is an invented thing (“‘money’ isn’t a ‘thing’ at all, it’s a way of comparing things mathematically, as proportions: of saying one of X is equivalent to six of Y. As such it is probably as old as human thought.”) (52). Graeber even performs a corrective on “knight-errants,” who in actuality were thuggish Christian fighters whose bullish debt extractions were washed over in literary accounts.

Among the book’s greatest strengths is a two-fold achievement in breadth and depth. It meets at the cross-section of great swaths of human history and is broad-reaching in its scrutiny of economic theories of debt. Yet it is explicitly conscious of its anthropological horizons. It signals a return to “big idea” anthropology that was perceived to have lost steam in recent decades. In a challenge to anthropologists published this month, John Hawks blogged: “Anthropology, supposedly engaged deeply in diverse communities around the world, is almost totally disengaged with the American public. Long ago, anthropologists spoke out on our origins, history, and diversity. Now, the public is much more likely to hear about human relationships and diversity from popular books and television programs hosted by amateurs. The most celebrated (and most watched) television program today touching on anthropology is Ancient Aliens.” Graeber’s book is acutely tuned to this concern, and is far-seeing and accessible in its disciplinary imperative on both accounts.The culminating effect of Graeber’s stirring transhistorical, multi-narrative accounts beyond simply a uni-cultural or national assessment of what meaning a social group has made of value is that it offers a solemn chronicle of how quantified and codified debt has led to the disintegration of largely self-cooperative civilizations. Thus, the volume could do very well on its own without genuflecting to a single discipline.

Without question, Debt‘s publication in a year as dynamic, historical, and value-driven as this one will greatly benefit its public reception. The book will resonate with global observers of the market-caused global debt crisis; the Arab/North Africa uprisings; the Chilean student debt movement; the “austerity” scarecrow and persistent protests in Spain and Greece; and the Occupy Wall Street mobilizations that have so far sustained an important alter-structure to the bulwark of capitalism. Many have asked whether the desperate act of a young indebted Tunisian man, Mohamed Bouazizi, triggered the remarkable social change witnessed this year, and in a reflexive moment Graeber himself shares that he “struggled for years to pay back his student loans” (389). Perhaps the most concise and accurate synopsis of the book I have found traces back to the author, who in engaging with one of his dozens of reviewers writes: You’re living in a dozen [systems] at once right now. Capital dominates. It does not pervade. Possibilities are endless.”

Maryam Monalisa Gharavi is a doctoral candidate in Comparative Literature and Film and Visual Studies at Harvard University.