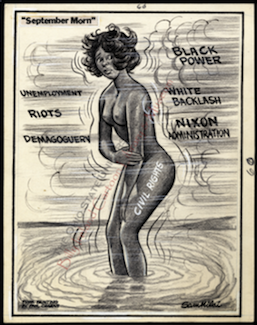 copyright Ed Stein (http://edsteinink.com).
Though John Roberts was the surprise Supreme Court swing vote supporting the ACA, popular conservative discourse still supports choosing precarity as a right. And it is precarity — not sickness — that conservatives are embracing. The at-risk-for-illness citizen is mapped onto a broader discourse of people who are strong enough to stave off illness, to choose insurance when they need it, all for the greater good of a capitalist health care system.
Precarity is really part of the fantasy of American exceptionalism — we’re tough enough to withstand hardship, and it is only those other precarious people who remain vulnerable, or break, who aren’t up to the challenge of being Americans. Precarity has always been with us in discourses about the good life and the American Dream. This dream, a relatively recent concept in U.S. history, has precarity at its foundations — the fantasy that free market capitalism will always protect those who work hard enough, an investment in property-owning that depends on significant debt, and the investment in an educational system that, despite claims about merit, so often rewards accidents of birth. The precarious woman, the murdered, and the sick body are simply the most powerful contemporary manifestations of rhetoric about America and its Others. Through profound repression, some poor and working-class white people work against material self-interest in order to maintain their self-image as strong precarious subjects. Some are waking up from the dream, but for many, the Other can never be ourselves.