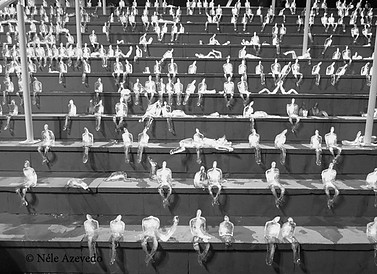 The Brazilian artist Néle Azevedo’s Minimum Monument (cover image above) is an ephemeral public art project comprised of hundreds of tiny human ice figures positioned in urban spaces. From the moment they are installed, the sculptures are already in thaw, already vanishing in contact with the atmosphere and under the viewer’s gaze. Little humans disappearing before our eyes. Drip, drip, drip.

Minimum Monument began as Azevedo’s 2003 master’s thesis, a project that sought to intervene in the dominant logic and form of the urban monument. Against the lasting heft of durable urban structures that remember “big” histories, these small perishable sculptures ask us to watch the disappearance of minor figures, ones whose lives do not play out grand historical gestures or the logics of conquest, exploitation, and unrelenting development. In this sense, they summon us to think and feel dynamically about forms of extinction and the forces that produce it.

Azevedo’s exhibit hinges on time–on the temporal movement of individual and collective sculptural transformation from solid to liquid. If we wait long enough in observance, all signs of the exhibit will vanish as though nothing had ever been there. It is no surprise that Minimum Monument has thus been received and celebrated as a commentary on global warming, as a sign of human extinction, the ways that some bodies are disappearing faster than others, how the species as a whole will likely not survive the trajectories of global capitalism and the enduring histories that have given rise to it. Yet watching these figures as they vanish is also an experience of observing what is not entirely perceptible–the process of becoming vapor, of atmospheric reabsorption. In this sense, the exhibit pressures the very notion of dis-appearance, provoking us to consider what is beyond our capacities for perception, what falls outside of History. Azevedo’s work reminds us that everything lost or stamped out by the force of History continues to exist in other earthly forms long after the brute fact of extinction.

I want to suggest that there is a crucial relation between the artist’s conception of the installation and its reception, between a critique of the historical monument and the threat of human extinction. Through its very inception, the grand historical monument indulges in a fantasy of material and ideological stability; it comes into being through a belief that it will endure as a material object, and that the interpretive significance of the monument will carry over into the future. Both the grand historical monument and the machinations of extractive capitalism take the present as ideologically and materially stable, acting toward the present as a time of mastery, a time in which the logic of neocolonial capitalism will continue to dominate into a recognizably “progressive” future.

What is so striking about Azevedo’s vanishing monuments is how certain bodies disappear faster than others, how some are more quickly and observably affected by the surround. I’m particularly interested in the temporal experience of these monuments; the melting exhibit is enacted on the verge of extinction. Conceptually, the verge is multi-dynamic: it marks an edge, a brink, and a horizon. It is also an area of indeterminacy that, while undeniably sutured to what lies before and after, is distinct from the times and spaces to which it is connected. It is a critical time-space from which we must confront the fact that soon no single (monument) body will be left. From which some bodies have melted, some bodies are melting, some bodies will come to melt. It is a provocation that challenges us not to imagine ourselves as merely “united” through the threat of our species end, but instead motivates us to interfere with the political surround that makes some bodies more quickly perishable than others.

I am not a scholar of the monument, but a thinker compelled by those often ignored or imperceptible historical traces that constitute our everyday lives. As debates about Confederate statues ignite across the cities of this nation, I have become ever more attuned to space in the capital of the Confederacy where I live. Down the street from my home, Monument Avenue is littered with larger-than-life men on horses, a super-heroic boast to the country’s Confederate leaders. In my basement, there is a toilet installed in the concrete floor in the middle of the room, a toilet without the dignity of walls around it. It is a Jim Crow toilet, a place where “the help” once relieved themselves, situated literally below “civilized” society and yet perversely left out in the dank open. More than the monuments themselves, it is this toilet that makes history manifest to me, that summons me to remember this particular past, and the ways this past endures now in other social, political, and material forms. 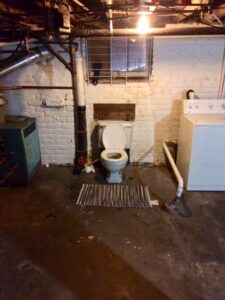 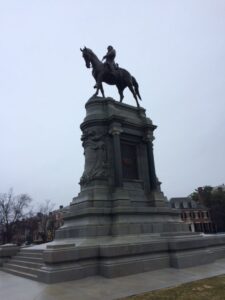 As she learns the history of racial oppression in the United States, my kindergarten-aged daughter studies the Confederate monuments with a curious eye and suggests that we might remove the men and leave the horses intact. I’m compelled by this attunement, by the prospect of removing Man from the monument and letting the animal tell an alternative history that is right there if we shift the public gaze. A promising displacement of the force of Eurocentic history, a way of re/cognizing the animal and those animalized by and through the consolidation of this nation.

In turn, I flirt with the idea of replacing the Confederate statues with the basement Jim Crow toilet–taking this history of de-basement and lifting it up as a testament to the country’s abiding histories of dehumanization. The toilet as a public reflection of the past and the present: an ignoble testament to the history of this place, a sign of the extraordinary shit some people have had to endure, and a reminder of everything and everyone we continue to lay to waste. In this strange fantasy, against the impulses and desires of the grand historical monument, I welcome the environmental and social forces that will act upon and interfere with this dank monument over time.

Julietta Singh is associate professor of English and women’s, gender, and sexuality studies at the University of Richmond. She is the author of Unthinking Mastery: Dehumanism and Decolonial Entanglements and a forthcoming experimental body memoir, No Archive Will Restore You. 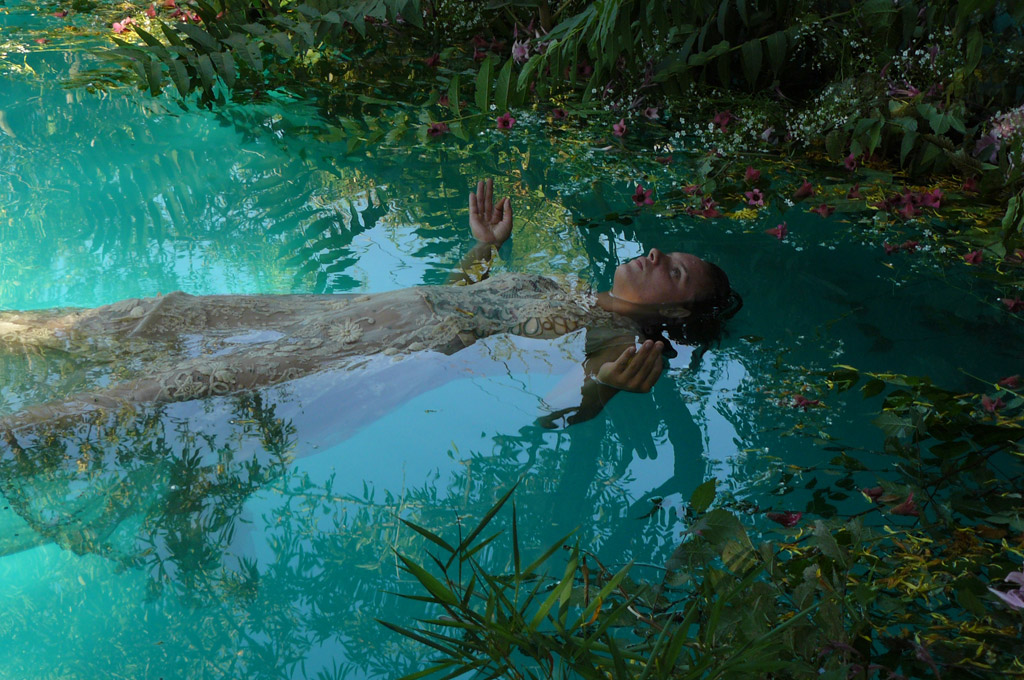