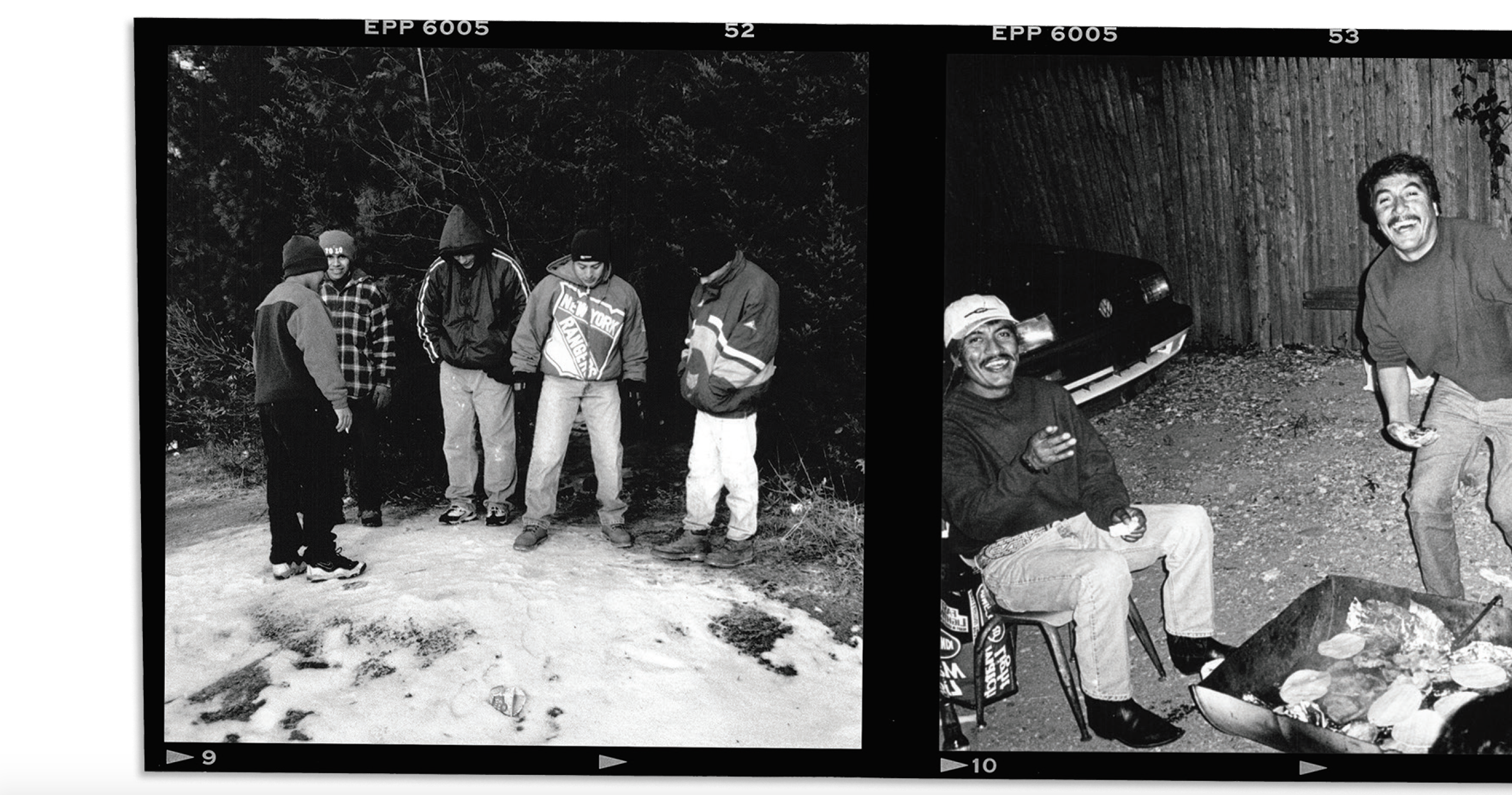 In the face of structural dispossession and intensified border regimes, what does it mean to demand or to defy “more visibility” and “better representation” as an undocumented migrant? This is a central question in Rebecca M. Schreiber’s recently published The Undocumented Everyday: Migrant Lives and the Politics of Visibility. In the book, Schreiber examines how migrants from Mexico and Central America use documentary film and photography both to “be seen” and to challenge imposed hypervisibility. While complicating the notion of a link between empowerment and visibility, Schreiber also shows how entrenched ideas about representation are at work in actual political struggles. This critical double move makes for a compelling intervention. Although the book is limited to a critical discourse–with language cast in rather standard academic molds–it gestures beyond its own limits and towards alternative practices and modes of belonging that are irreducible to nation, state, or citizenship.

Schreiber brings to bear careful attention and rigor in critiquing her case studies. These are projects that originate from artists and communities across North America: from Oaxaca to Poughkeepsie; from San Francisco to Tijuana. What they have in common is that they all relate to the US-Mexico border in some way and were all conceived between the years 2000 and 2012. With Schreiber’s rich account of this recent history, it becomes easier to discern how infringements on migrants’ rights are in no way exceptional to our current moment, but have rather been the order of the day for a long time. The same goes for migrant activist movements: although we are now seeing mainstream media coverage and possibly a new momentum, a long history of arduous resistance practices precedes that.

The projects discussed range from the distribution of still cameras to undocumented migrants, as in Unseen America and Border Film Project, to the performative interventions in and of Tijuana Projection, Sanctuary City/Ciudad Santuario, and the documentary film Maquilapolis: City of Factories. Schreiber uses these projects to rethink the concept of self-representation–and she argues that they show how self-representation can be mobilized in a number of ways that exceed conventional conceptions and liberal modes of selfhood.

It goes without saying how timely the book is, after a long summer of protest movements in the wake of US “zero tolerance” policy and migrant family separations. Schreiber helps us to historicize such movements and to think through “impossible activism”–of speaking out publicly without having the political voice or rights that are (supposedly) granted by citizenship.

A case in point is the video Si No Nos Invitan, Nos Invitamos Solos, showing an action by undocumented activists from No Papers, No Fear interrupting a speech at a US Commission on Civil Rights briefing in Alabama in 2012. For Schreiber, the video serves as a “counter-document” to give the performance a political afterlife. This does not mean any media exposure–but the video was specifically intended for circulation and political mobilization among other undocumented activists.

A slightly different way to tackle the problem of visibility and exposure is found in Schreiber’s discussion of Sergio De La Torre and Rosario Sotelo’s Santuario (2009). Made in response to a racial profiling case in the Mission District of San Francisco, the stop-motion video draws attention to the hypervisibility forced upon residents who are simply “driving while Latinx.” In the profiling case, a local resident was namely pulled over for having a rosary hanging from their rearview mirror–and, as Schreiber explains, such objects are central to the “racial-ethnic profiles” developed by police officers and ICE to target undocumented migrants. De La Torre and Sotelo subverted this logic by way of surveilling city police themselves. During this performative intervention they took the still photographs which the video is composed of.

By using a rosary as central motif the artists turned racialized iconography to their own use. Schreiber further argues that we could see the performative intervention preceding the video as “counter-surveillance” (220). But perhaps we could also understand the project as a form of counter-visuality, to use Nicholas Mirzoeff’s term–that is, as a “performative claim of a right to look where none technically exists” (478). Through the artwork, the artists namely claim autonomy vis-à-vis what Mirzoeff would call visuality; the project of visualizing, classifying, and separating the world in the interest of consolidating power. Moreover, the stop-motion aesthetic references technologies of surveillance, as well as the Google Street View feature, Schreiber points out. This is particularly important given Google’s part in gentrifying the Mission District. If we read Schreiber together with Mirzoeff, Santuario is then not merely a response to such totalizing gazes, but it claims the right to look as a prior right and as a challenge to what constitutes the political field in the first place.

The video was part of the 2009 exhibition Sanctuary City/Ciudad Santuario, 1989–2009 at the now-closed Queen’s Nails Projects in San Francisco. De La Torre was the lead artist of the exhibition and is someone Schreiber returns to throughout the book. He co-directed Maquilapolis: City of Factories–a central case study in the book–with Vicky Funari in 2006 and also worked with Chris Treggiari on a number of projections onto buildings within the Mission District in 2010. As a public response to local ICE raids, these projections created what Schreiber calls “counter-spectacles” (228). 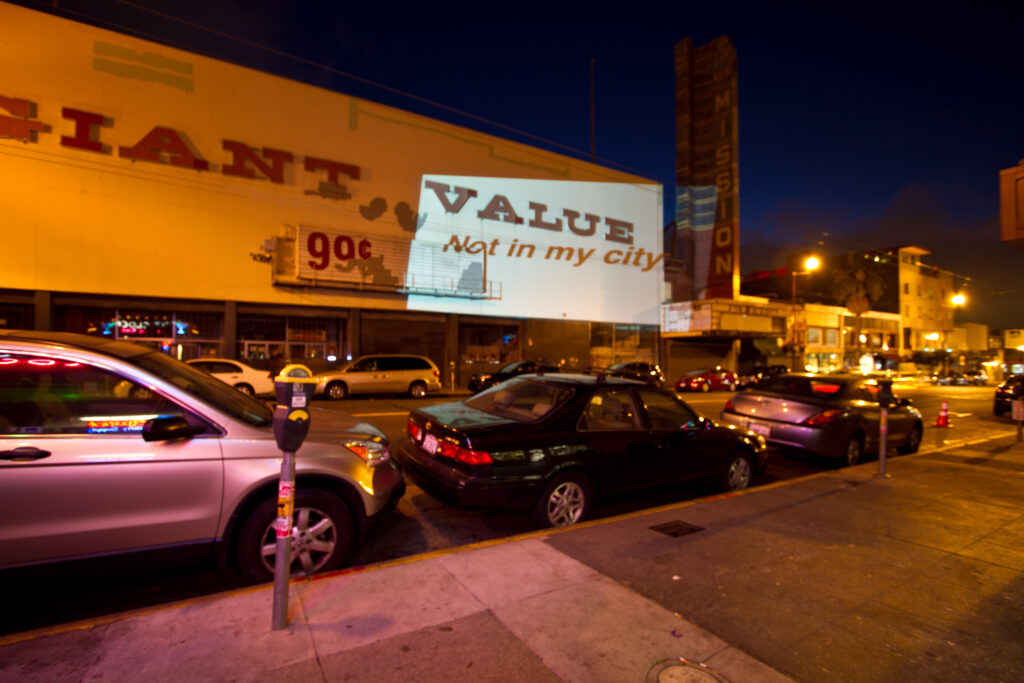 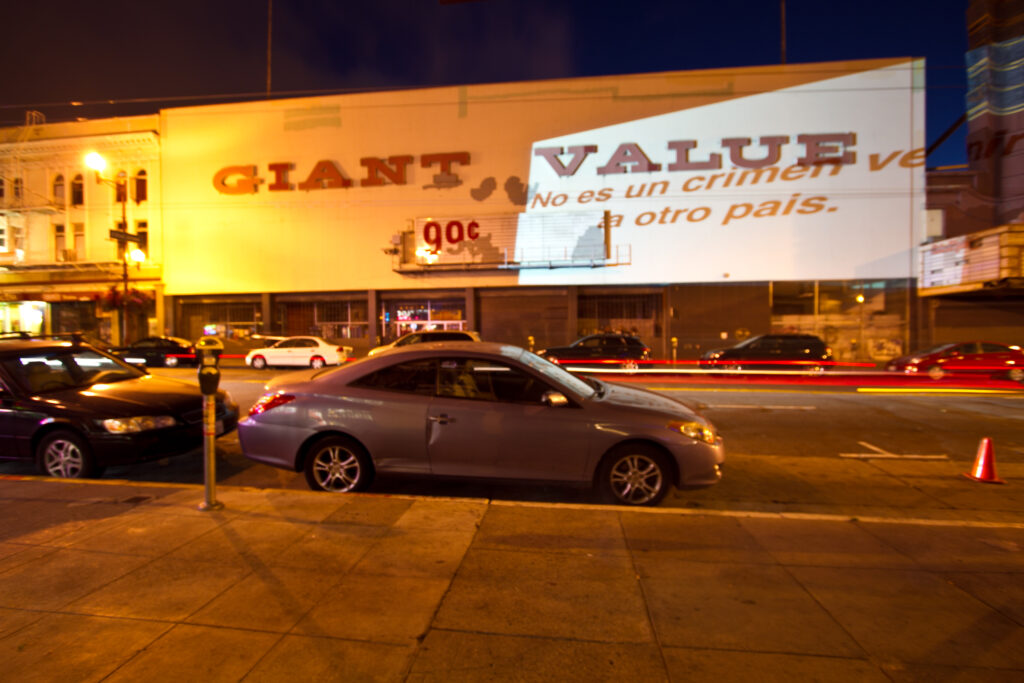 Schreiber’s reading of this and other projects shares points of reference with recent publications on undocumented activism–from Anne McNevin’s Contesting Citizenship to Karma R. Chavez’s Queer Migration Politics. Drawing on such scholars as Nicholas De Genova, Alicia Schmidt Camacho, and Diana Taylor, Schreiber situates her work at the intersection of American studies, Latinx/e studies, and critical border studies. The book also speaks to current concerns in media studies. It has, for example, a close affinity with Pooja Rangan’s recent Immediations: The Humanitarian Impulse in Documentary–which also centers its critique on participatory documentary and self-representation.

The core question Rangan poses could just as well be from Schreiber’s book: “What ‘message’ is sent to society’s others when they are asked to document themselves and claim their human rights?” (16). Disenfranchised humanity is often “enlisted and commodified” in this process, Rangan claims. But the “language of documentary immediacy is most insidious when it is employed by disenfranchised subjects representing themselves” (4). At this juncture, Schreiber complements Rangan’s more wholesale critique with examples of projects that do manage to create “alternatives to liberal tropes of ‘visibility,’” as she puts it.

The authors both raise the fundamental question of how one can understand representation by and of those who are denied political representation in the first place–of the dispossessed subject that cannot simply seek recourse to the visible as a ground for evidence. For Schreiber, this problem for thought is neither resolved nor dealt with in strict theoretical terms. The register is rather a sociological one.

There are some important theoretical insights to be gleaned, however. Instead of taking concepts like visibility or representation at face value, Schreiber looks at how they are operationalized and how activists play the game of liberal selfhood along “fictitious lines”–fully aware that they deploy these concepts as a tactics, rather than as goals in themselves. She argues that among her case studies there are migrant-led projects that defy and reconfigure conventions of representation–against notions of inclusion and recognition, and the supposedly “transformative capacity of visibility” (274). They do not only contest the policing of borders between and within nation-states, but they visualize “ways of belonging that do not rely upon notions of citizenship” (273). Through this reading, Schreiber works to challenge and undo our received notions of representational politics.

Still, a question that lingers is whether we do not need another kind of language altogether to speak of and enact other ways of belonging. It comes as no surprise that we are trapped in a vicious circle of misnomers when we try to name cultural expressions that are “exterior to liberal selfhood,” as Schreiber puts it. While she underscores that migrants do visualize “alternative modes of social existence,” what kind of writing could such interventions be met by?

Schreiber opts for a critical vocabulary structured around terms like “counter-documents,” “counter-visibility,” and “counter-representation.” But what about a concept like opacity or even complete withdrawal from the yoke of representation? Put differently, are we only left to critique and revise dominant representational practices, or are there other, parallel lines to pursue? Perhaps a more poetic grammar, like that in Amy Sara Carroll’s work on undocumentation, could be a way out of the alleged lucidity of standard academic discourse.

While such approaches are not explicitly brought up by Schreiber, her book suggests and provokes ways to think further about an affirmative politics by, with, and for migrant communities. Beyond merely a new critical vocabulary for such a politics, however, we are in pressing need of radical writing practices that open up towards other modes of belonging and that are attuned to experiences that are irreducible to sovereignty, citizenship, or governance. With The Undocumented Everyday, Schreiber prepares and lays the important groundwork for such projects.

Christian Rossipal is a filmmaker and PhD student in Cinema Studies at NYU’s Tisch School of the Arts. His research interests include media and migration, minor cinemas, and biopolitics. He is part of the artist-activist collective Noncitizen and is currently finishing a book chapter on their new project, The Noncitizen Archive.